We at Leaky Towers have long had misgivings about the use of consultants by Wirral Council.  SEE HERE

Therefore it comes as no surprise to us at all to find out that following a Freedom Of Information request by that pesky Councillor Ian Lewis they have spent £1 million on hiring consultants.   SEE HERE

Of course we at Leaky Towers like to consider the bigger picture and our concern is not always just about the extortionate costs of consultants but the questionable “added-value” of people who seem to be quite happy to hasten the demise of the public sector as long as there’s a rise in their bank balance.

Essentially we agree with the definition that  “a consultant is someone who is brought in to find out what has gone wrong , in the  comfortable expectation that he will not bite the hand that feeds him by placing the blame where it belongs”

As reported time and time again on this blog this means that following the departure of consultants from the Wirral Council “crime scene” there usually remains more questions than answers.

Amongst many others we’ve had Richard ” Highways robbery” Penn, Rob ” Making hay out of the 4 week delay” Vickers, Joyce “Putting the earn in” Redfearn, Anna “Quids-in” Klonowski and Michael “Boiled Frog” Frater , oh and some anonymous IT Guy struggling to get by on £800 a day. SEE HERE

The latest in this inglorious trail of consultants is iMPOWER (no really – this is what these people decided to call themselves) and the recent publication of their report about the transport needs of disabled children. SEE HERE

Their 40 page graph-tastic report costing a whopping £107,000 demonstrates that you may not get much bang for your bucks but you may get the answers you want.

In their report iMPOWER identify that the problem Wirral Council faces in the rising costs of providing transport lies in the fact that too many disabled children are being assessed as having Special Educational Needs (SEN) on Wirral compared to some other local authorities ( because as anyone who has a child who has been assessed for a such a  SEN Statement – these are an absolute doddle – NOT!)

But not to worry iMPOWER have been discussing ” efficiency opportunity ideas” (!) with parents and carers of disabled children who they have identified have the “value modes” of either “settlers, prospectors or pioneers”

Is it us or do these kind of people grow up watching too many Westerns (see also our Cowboys & Indians story) ?

In his book ” A Brief History of Neoliberalism” David Harvey offers a clear definition of neoliberalism as a system of “accumulation by dispossession,” which has four main pillars:

Or in terms of consultancy -speak and using the wild west analogies of which they seem so fond, it seems to us it’s a case of the “Not OK Corral” where consultants encircle their wagons, staking a claim for the public services pot of gold. 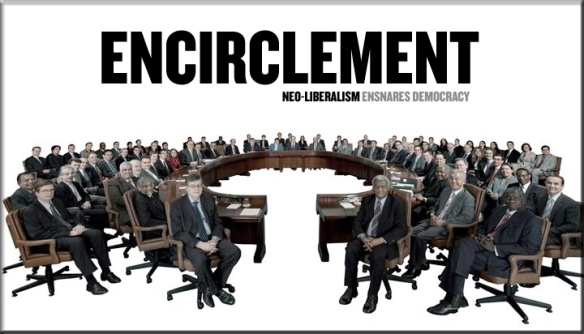 3 thoughts on “Consultants & The Encirclement of Public Services”