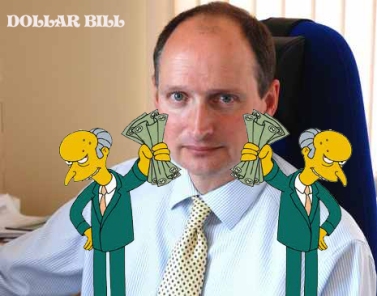 We like to keep up with Wirral Council alumni who have moved on to pastures new and as we know there has been a steady stream of council officers leaving since Wirral Council’s Annus Horribilis of 2012 .They’ve usually left clutching a large cheque to a) keep them quiet b) reward them for abject failure or c) they’d served their purpose and were becoming a liability – and sometimes all three.

Some have gone on to sit on Trustee Boards or become Directors elsewhere – trying to put all that “unpleasantness” at Wirral Council behind them and pretending it had nothing to do with them.

One of the more fascinating Wirral wanderers who we’ve reported on is former council legal boss Bill Norman.Thankfully the long suffering folk of Hereford were quick to get in touch after they inherited this model of the modern day public servant.

Now it would seem that with “immediate effect” Norman has relinquished his position at Hereford Council asking for and getting a third redundancy package following his lucrative stints at Torbay and Wirral.

The fact that Norman went with indecent haste suggests he either couldn’t wait to get out or Hereford Council couldn’t wait to get rid of him.This is also very reminiscent of his departure from Wirral Council – where there was always the puzzle as as to how a local authority can make someone who holds the statutory post of Monitoring Officer “redundant”.

The answer is that you simply can’t – but that doesn’t stop councils concocting a cover story to prevent the prying eyes of the public wanting to know how their money is being (mis)spent.

Needless to say the full story of Bill Norman’s debacle of a departure from Wirral Council has never been told but from what we know it is a salutary lesson in how leading councillors conduct themselves when it comes to backstabbing.

We’re particularly (though not exclusively) referring to Cllr Phil Davies relying on others to do his dirty work – a modus operandi which continues to this day and which highlights his weakness as a so-called “leader”.

Of course now that Bill Norman is free of the encumbrances of public office and  – after 3 big pay-offs – we presume financially secure , he could perhaps contact us at wirralleaks@gmail.com and in the public interest divulge exactly what went on behind the scenes at Wallasey Town Hall as we believe that what went on then still influences a massive cover up that is going on now.