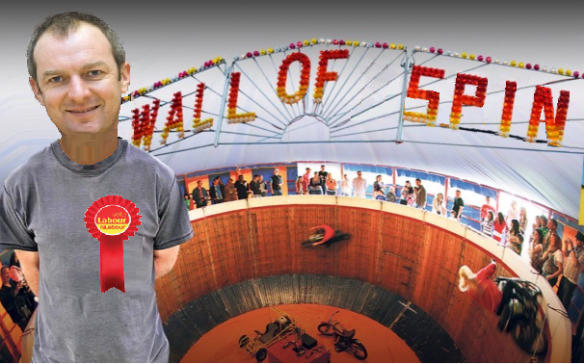 After we reported earlier this week that we paid that Ipsos MORI  twerp £25,000 for telling us all about the C word it would seem it’s catching – a bit like herpes.

Phonetically the actual C word comes out something like this :

This has led to mutterings under the breath by long suffering town hall staff of a quite different C word which would certainly be familiar to the aforementioned Tucker from TV’s political satire ‘The Thick of It!’.

But really could this man be any more of a cliché ?. We know we printed his job description when he was  hand-picked for the role as Power Boy Pip’s hand-holder (sorry appointed after an exhaustive search and rigorous recruitment process) but in reality his JD translates into  :

We think it speaks volumes about Wirral Council’s priorities that as services are cut and staff are made redundant that the only Council departments that have had an increase in staff are the Legal Department and the Press Office.
How ironic that these two departments spend an inordinate amount of time and money NOT communicating but controlling  what the public are allowed to know and what they’re not allowed to know from behind a wall of spin !.
In fact “The Wall of Spin” is currently the only area of local government operations that seemingly isn’t under threat.
This is a world where according to the Ipsos MORI poll conducted for Wirral Council that when only 12% of Wirral people think that the Council provide value for money this is sold as a “positive driver”.

And a  place where only 3% of the population think  that definitely agree they can influence decisions about where they live but where a lone local MP can influence 100% of local decisions !!.

Oh how we long for the day when we can say “Okay Fuckity Bye” to the lot of them and then Wirral Council can concentrate on what local people really want – like getting value for money and influencing local decisions perhaps?.
https://www.youtube.com/watch?v=TUq8dSOqWkw