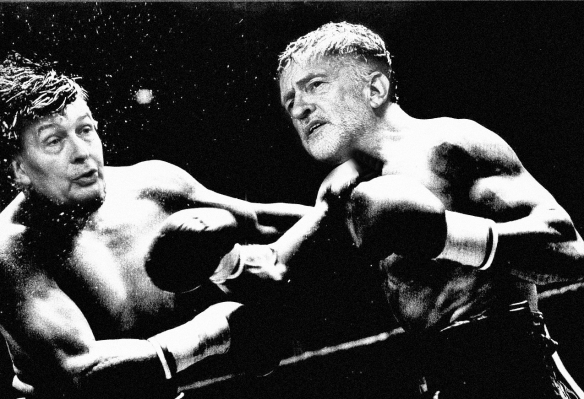 There was a gathering of Labour activists (not to be confused with leaks activists) who gathered today to worship at the altar of Labour Party leader Jeremy Corbyn at West Kirby Methodist Church .

Now although we have Margaret Greenwood as the Labour MP for West Wirral (and about whom we hear good reports from her constituents ) we don’t usually associate West Kirby as a Labour stronghold when it comes to local politics.

We would have thought Corbyn would have found a more conducive environment for his grassroots message in Birkenhead  – Wirral’s and one of the UK’s – safest seats. Especially when Birkenhead would certainly have been a more convenient stopping off point before he hotfooted over to Liverpool for a £45 a head fundraising dinner.

We can only surmise that local political heavyweight Birkenhead MP Frank Field wasn’t having any manifestation of  Corbynmania on “his” patch.

Oh how we relish the fact that Field nominated Corbyn as a Labour leader allegedly  to promote “debate” within the party only to see his sly machinations blow up in his face when Jezza delivered the knockout blow and got elected as leader. We think it is significant that Corbynistas have recently described Field as “core negative” when it comes to the Labour leader and which is best exemplified by Frankenfield’s tetchy, arrogant display of contempt for the people who voted for him when discussing the inexorable rise of Corbyn on TV.

To add insult to injury Corbyn is backing the “Remain” campaign in the EU referendum which must rub Europhobe Frankenfield up the wrong way something rotten – and we absolutely love it here at Leaky Towers ! . This may also explain Field’s curious absence from today’s publicity shots showing Corbyn and Labour’s  local election candidates . As we can see there’s Wallasey MP Ange and there’s the aforementioned Marge but it’s a no show from “core negative” Frankenfield and allegedly “hostile” Wirral South MP Alison McGormless!.

There are several questions that spring to mind perusing  this picture  – including how did Wednesday Addams get in there – but we’re particularly wondering how Frankenfield feels about the disloyalty shown by Wirral Council “leader”  Power Boy Pip Davies by his obsequious appearance in this apparent show of local solidarity. We must say it must be worrying for Frankenfield that Pip is showing worrying signs of having a mind of his own and exhibited by such acts of defiance as signing that letter to The Times  from North West council leaders supporting the  campaign to remain in the the EU . It’s just a shame for him that he didn’t stand up to Field sooner and he wouldn’t be up to his neck in the Wirralgate scandal !.

No wonder Corbyn looks pensive in this picture – does he know what he’s actually backing here or is his PR guy Seumas Milne as remiss/ignorant/complicit when it comes to the worrying issues highlighted in local social media as his local equivalent Martin Liptrot(sky) ?.