Our thanks go out to one of our keen readers who pointed out it is three years to the day that the chain of events that led to Wirralgate were shamelessly instigated.

Put out the flags! pop the corks! and the celebrate the most successful cover up in Wirral Council history !!. Yay !!!

Three bloody years !. If only they were as good at running the Council as they were in covering their arses perhaps His Lord and Ladyship could finally retire.

Here captured for posterity is the Council meeting held three years ago that the then Deputy Mayor Cllr Steve Foulkes unleashed a series of events that have potentially cost the people of Wirral hundreds of thousands of pounds. Because obviously like a L’Oreal supermodel he’s worth it (that’s a joke obviously).

Whether he was relying on his own arrogance and being safe in the knowledge he was protected by some of the most powerful (and corrupt) political figures  on Wirral or the docility of the other elected members in Council chambers who think this kind of conduct is acceptable because according to Foulkes they’re “kindred” we’ll leave to our readers to decide.

What we do know is that following this unbecoming outburst in the aftermath of the appearance of whistleblowers Hobro and Morton (who we can ecstatically report are still very much on the case – bless ’em ) and which so irked Foulkes that he then resorted to these kamikaze tactics and tried to ensnare a Liverpool Echo journalist sitting in the public gallery into an amateurish smear campaign against political opportunist  Cllr Jeff Green – seen standing in the above picture and pretending to be aggrieved. 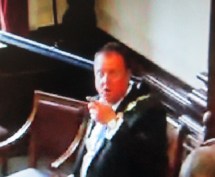 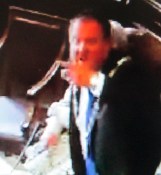 As you can see from the above pictures this is how some politicians think is the control they should have over local journalists.They’re there to do as they’re told and if they don’t they’re  threatened with legal action. But imagine being told what to do by Steve Foulkes ! – it’s enough to make a grown man’s scrotum retreat into his pelvic cavity at the speed of Usain Bolt.

What has intrigued us these past three years -other than the fact as to how the hell do they get away with it -is did no-one (and we’re talking Power Boy Pip here) say : So what were you doing leaving the Council chambers to hand an incriminating document stolen from the ex-Director of Law’s files in contravention of the Data Protection Act in an attempt to get back at your old rival Jeff Green?

What did Foulkes say ?. I was having a wazz?

Probably – as let’s face it he and his ilk have been taking the piss for years….

5 thoughts on “Three Is The Magic Number”