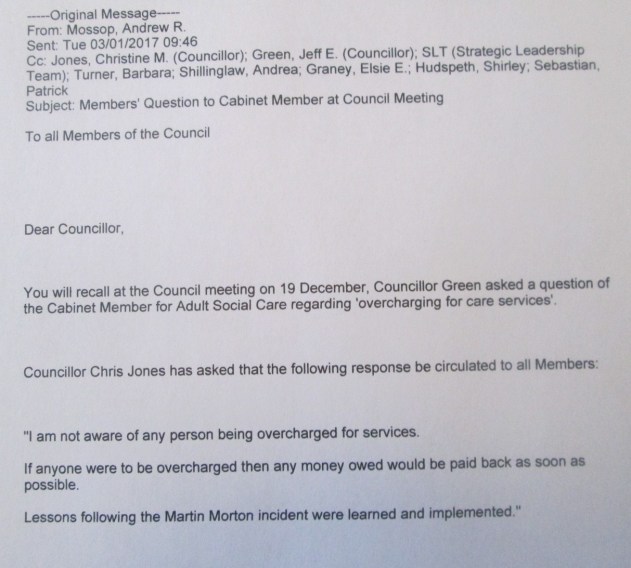 Whilst our focus was on the Nigel “Highbrow” Hobro question raised at the Wirral Council meeting on 19th December – and to which we presume he is still awaiting an answer from council leader Phil ‘Power Boy Pip’ Davies – we missed this seemingly innocuous little question from Tory leader  Cllr Jeff Green.

As you can see he , all other councillors and the Strategic Leadership Team  were given an answer to his question about ‘overcharging for care services’ which was directed at the Cabinet Member for Adult Social Care Cllr Chris Jones earlier today.

Now we don’t know – yet anyway – what was behind Cllr Green’s question but we suspect he’ll be making a media statement shortly about how ‘outraged’ he is about a case of ‘overcharging for care services’ that has been brought to his attention.

We know he certainly knows of one already – as do many councillors and council officers who have chosen to cover up a quite scandalous case of overcharging.

We know this because we forwarded this email to Wirral Council whistleblower Martin Morton himself (and we were quite amused to hear he’d already received a copy !)

Morton must be so relieved that as he rots on the dole unable to find a job and with very little prospect of ever getting another job again his experience has now been redefined as an ‘incident’. That’s if you can call systemic bullying and harassment , cover ups , lies , £1 million pay offs,  £31 million toxic debts, the council  doing business with drugs money launderers, turning a blind eye to the abuse of vulnerable people , covering up of a death and the paying back of £736,000 to disabled people as an ‘incident’.

Morton maintains there is an outstanding case of over charging and that money was not paid back ‘as soon as possible’ as Cllr Jones claims or indeed at all. This allegation   follows the publication of the ‘Independent Review of Allegations Made by Martin Morton ( & Others)’ cobbled together by compromised consultant Anna Klonowski in 2012. Now we don’t know whether this is what Cllr Green is hinting at (and frankly we’re not that interested in his political point scoring) but we do have a mountain of material from Morton evidencing this further allegation of overcharging and which was not reported on his now sadly defunct blog.

We are currently working through this simply astonishing archive and will be bringing you all the tawdry details of this long running and ongoing cover up and the names of all those involved. From what we’ve seen already it makes a monumental lie of the claim that ‘lessons following the Martin Morton incident were learned and implemented’.

We will also be reflecting on the fact that almost exactly 5 years after its publication that the  so-called shockwave of Klonowski’s Independent Review can now be more accurately described as a slight tremor and failed miserably to drain the poison from the body politic on Wirral.

5 thoughts on “The Morton ‘Incident’ – Revisited”