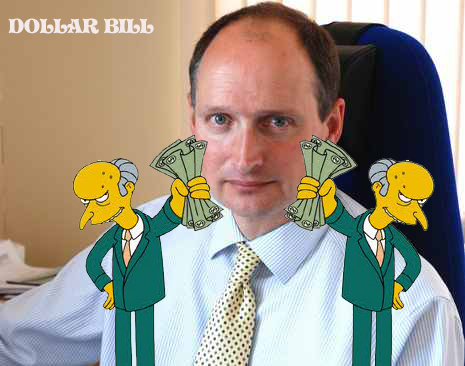 As we wind down it appears some of our long running stories are finally coming to fruition.

We’d like to thank the many readers who forwarded the latest news about the former Torbay/Wirral/Hereford (in that order) and currently ,for now anyway, head of the legal department at Cheshire East Council, the infamous Bill ‘The Bung’ Norman.

Yes , it would appear that Billyboy has been officially suspended from duties 3 months after his alleged despicable dirty work was retrieved from beneath the carpet.

We’re gratified to read Cheshire East Council have at least got things right when it comes to suspension procedures. As we should all know by now the likes of Bill Norman operate at such exalted heights they are not subject to the same rules as mere mortals such as us. Oh no, first of all , before any action is taken against these local government Gods there must be proof of a prima facie case to answer.

This of course is what Wirral Council failed to do when Bill Norman worked for them and which led to a near enough, and as far as we’re concerned, a totally unjustified £150K  pay off  – which of course meant that Wirral council taxpayers yet again picked up the tab for cowardice/incompetence on the part of their most senior council officers/politicians .

However the most interesting aspect of this case for us is that Bill has built up such a following during his travels (although not necessarily in a good way) that it was inevitable that his much anticipated and well deserved demise would ultimately be chronicled on this blog.  One of those sources giddy with schadenfreude at Bill’s blunders reached us by a circuitous route. Our message to them is this – get in touch with us when you’re happy to explain the backstage compromise that led to to Wirral Council being the recipient of the ‘ Most Improved Council’  award at the 2015 Local Government Chronicle awards . This of course being the fig leaf behind which they have hid their corporate micro-penis ever since. Might we suggest that low cost loans from one failing council to another must have eased negotiations. Just sayin’

To which all we can say is pass the sickbag – all of these duplicitous town hall potentates make us positively bilious.