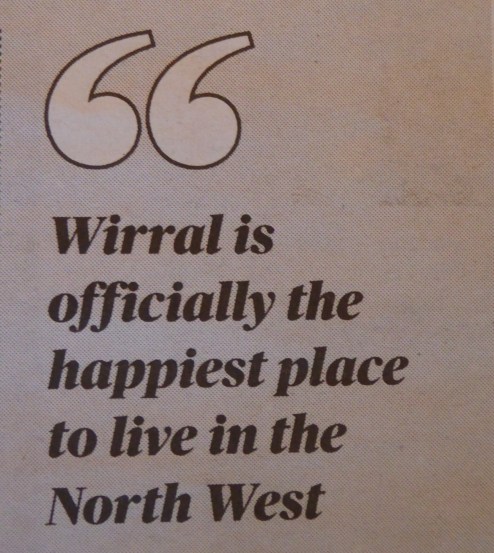 Imagine our delight at Leaky Towers to receive a rare ,hand delivered copy of Wirral View on a Sunday afternoon. If truth be told we were briefly entertained by the sheer brain numbing , desperate, relentless positivity of it all.

As it would appear that this comic (without the laughs) is not attracting enough advertising revenue to make this vacuous vehicle viable we are instead treated to 28 pages of relentless intelligence insulting  BS ( we can almost feel our cranium escaping out of our earholes).

In lieu of addressing our ‘information deficit’  we get a free full page plug for relentless self promoter Nisha Katona and her Mowgli chain of Indian eateries. Ms Katona eulogises about Wirral without mentioning she hasn’t yet opened a restaurant in the place where she chooses to call home.

But don’t despair Nisha dispenses her wisdom on how to start a successful start -up. Might we suggest the income earned from being a barrister for 20 years might have helped somewhat and that attending Wirral Chamber of Commerce’s Enterprise Hub (FFS!) wasn’t the key to Mowgli’s nationwide success (just sayin’!)

However we acknowledge that Nisha is just trying to make a (very good) living and instead we reserve our opprobrium for Cllr Phil ‘Power Boy Pip’ Davies and his ‘leader’s column’ ( no laughing at the back) .

Pip makes reference to the recent Rightmove website survey which suggests that Wirral  is ‘officially’ the happiest place to live in the North West of England and the third happiest in the UK (  yeah ! whatevs!)

As we’ve alluded to before , perhaps ‘happiness’ on Wirral is predicated by on which side of the M53 you live and whether you have a property to sell with Rightmove ( just sayin’). Even after using the word ‘officially’  Pip concedes that these surveys are ‘ a bit of fun’.   But fun for who?  lazy press officers?  It should as come as no surprise that Pip concludes ‘What a wonderful place we call home’

But then when a monumental mediocrity like him reaches the top of the Wirral tree – a la Mandy Rice Davies – he would say that wouldn’t he? For others who don’t live in the right postcode he fails to acknowledge that life on Wirral can be pretty grim.

Meanwhile other highlights from this latest edition include Cllr George Davies cutting a tape ( Freud would have a ( Frank) Field day) and the headline ‘Everything you want to know about Wirral’  juxtaposed ,with no irony whatsoever, with  ‘ Secret Bunker of New Brighton’ .

You really couldn’t make this shit up ! – but  Wirral Council do – and at our expense. But at least thanks to Wirral View we know to make a ‘CHEEKY CHILLI!’