Wirral  Council have a couple of mentions in the Rotten Boroughs section of the latest edition of Private Eye .

“Just a couple ?…..” snorts Her Ladyship ” that’s a good ‘Performance Indicator’ of the ‘Direction of Travel’ on their  ‘Improvement Journey’ “

The first mention is in an article about Sheffield City Council and their pursuit of Chinese investment (or “Wang wonga ” as the Eye would have it) . However when it comes to such ventures it would seem that Wirral Council has now become the byword for naivety, lack of due diligence and hyperbole after the Stella Shiu ‘International Trade Centre’ fantasy left them with “egg foo-yung on its face” !

It really doesn’t augur well for Wirral CEO Eric ‘Feeble’ Robinson and Wirral Council leader Cllr Phil ‘ Power Boy Pip’ Davies repeated declarations following their MIPIM missions that billions and billions and billions of pounds – or euros or dollars or yuan , they’re not fussed where the moolah comes from –  will soon be ‘transforming’ Wirral and it’ll be the land of milk and honey where the streets are paved with gold (see artists’ impression).

The second mention involves the Eye picking up on our  Sorrento Shame story under the title ‘Travel Section’ . You’d think after undertaking an ambassadorial role as Mayor and Mayoress that the Foulkes’ would be well equipped to foster good international relations. Alas – it would seem that whilst you can take the girl and boy out of Birkenhead you can’t take Birkenhead out of the girl and boy. 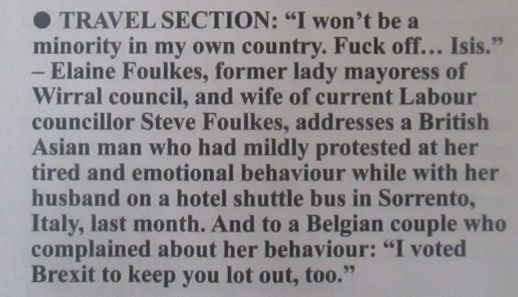 However to end on a happy note here – giving a whole new meaning to ‘holiday snap’- is a touching Sorrento memento which Elaine Foulkes posted on social media for us all to enjoy.