And so after a previous meeting behind closed doors of the Employment and Appointments Committee it would appear that full Council on Monday 19th March will rubber stamp the permanent appointment of current interim Assistant Director : Law and Governance Philip McCourt to the new post of Director – Governance & Assurance (Monitoring Officer) 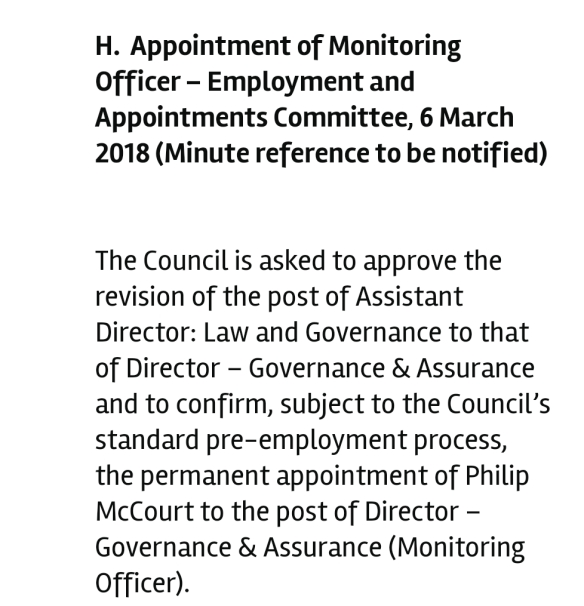 We have to doff our coronet to McCourt on this one. He sat back as Wirral Council struggled to appoint to this poisoned chalice of a post and watched gimlet-eyed as they had to bump up the pay (funny how there’s always money to be found for the upper echelons of local government isn’t it?) and upgrade the post from Assistant Director to Director enabling McCourt to sit at the top table of council chief officers. And from what we understand there was none of that tiresome psychometric testing or bothersome interview process for such a high profile post. Oh no it was a shoo-in for fêted Phil.

Canny McCourt has cleverly manoeuvred himself into a strong position by getting the lowdown – and boy do we mean lowdown – on Wirral Council. This was not only on the job – when he could fit Wirral Council business in around his other consultancy commitments that is. Checking out his LinkedIn profile this included not only work for solicitors Weightmans LLP , where no doubt he would have encountered former Wirral Council legal alumni Morris Hill and Simon Goacher, but also during a stint at Bristol City Council in 2016 where he would have compared cheques with Anna Klonowski – author of damning Independent Review and Corporate Governance reports about his latest employer. The man who took over from McCourt at Milton Keynes Council in May 2013 was a Stephen Gerrard (no, not that one) . Coincidentally enough Gerrard was Interim Head of Legal and Member Services at Wirral Council October 2012 -May 2013 during the then permanent head, Bill Norman’s suspension (Norman later went on to become involved in all kinds of shenanigans at Hereford and Cheshire East councils) . Gerrard also left somewhat hastily , whether it was because he and his deputy Surjit Tour were not the best of buddies we can only speculate. However ,as we know, Tour was later to make the most of an unguarded (and racist) comment from Deputy Leader of Wirral Council Cllr George Davies and astonishingly ascend to the top legal job at Wirral Council before escaping back to Sandwell Council. We don’t know about you but this local government merry go round makes us dizzy (and slightly nauseous).

Whether McCourt will prove to be as controversial appointment as Norman and Tour only time will tell but we do know he’s inherited some very thorny legal issues and knowing his political paymasters as we do there will no doubt be more to come. As ever the real test for a head of law at Wirral Council will be how they reconcile protecting powerful politicians with protecting the public purse and the public interest. We shall be particularly interested to see whether McCourt follows the path of least resistance trodden by his predecessors and favours the former over the latter.