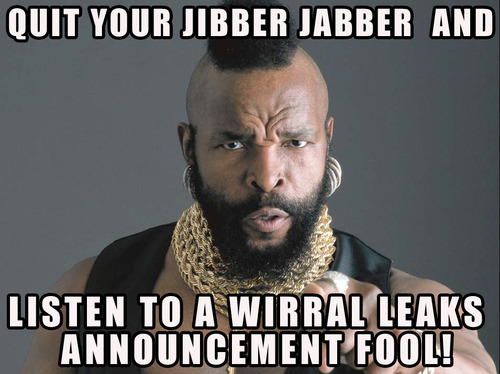 Our Wallasey Town Hall (WTH) fixtures and fittings expert contacted us to say :

Hi,
Sorry not able to get a picture ..but for over a week a team of carpet fitters have been fitting the most luxurious carpet in the council chamber at WTH .
It’s very thick, predominantly black with gold swirls, must have cost a fortune, it looks and feels like top end! But what else would you expect from these self righteous t****.
Perhaps one of your contacts will be able to get you a pic.
Just sayin’….

Sounds like it was designed by Wirral Leaks’ favourite motivational speaker Mr T !

The first person to provide us with a pic of the new carpet gets to roll around on it with a chief officer of their choice . Let’s bring back the glory days of municipal rumpy-pumpy (Shake’N’ Vac not provided) .

The appointment of of highly paid consultants to perform statutory tasks on behalf of Wirral Council officers continues. The latest insult brought to our attention involves the appointment of Mott MacDonald (not a euphemism) to complete a Traffic Network Management Plan at a cost of £22,745.19 . Apparently they were the only ones to submit an application. And what do you get for your money you might ask?

Wirral Council are looking to appoint a consultant to produce a Traffic Network
Management Plan. The objective of the commission is to undertake two
distinct stages of work. This will include an audit to review against the current
legislation to ensure that Wirral Council is discharging its responsibilities. The
second element of the work is to produce a Traffic Network Management
Plan.
The Traffic Management Act 2004, Part 2: Network Management by Local
Authorities imposes a duty on traffic authorities to secure expeditious
movement of traffic on their network and to appoint a Traffic Manager. It is
important that the authority undertakes its duties under Part 2 of the Traffic
Management Act satisfactorily, and in the event of an authority failing to
perform its network management duty the Secretary for State has powers to
intervene. This work will identify what is required to pass the duty.

By the sounds of it it is basically an arse-covering exercise in case central government intervenes yet again ( see also ‘Local Plan’) and asks why local government officers haven’t got a Mr Magoo as to what is required to cobble together their own Network Management Plan.

We understand  BCEGI  is an international property developer and construction company with foundations in China who hoped to be Wirral Council’s joint venture partner in the Wirral Growth Company . However as we reported it was Muse Developments who got the gig – Muse Musings and More Muse Musings . You will also note that the runner up in the bid was BCEGI/ Scarborough and we noted that there were some problematic areas with bids .Sure enough we have just received the following leak from a well placed source :

Oh dear – we do hope these allegations prove unfounded. How many times have Wirral Council cocked up a procurement exercise and uttered those immortal words : lessons have been learned. We certainly hope they didn’t put the procurement in the hands of a highly remunerated consultant with a chequered past or we could be looking at yet another potential failure of due diligence couldn’t we?
AND FINALLY ……..TRIBUNAL TRIBULATIONS
We’re best not commenting on news of this Tribunal found on John Brace’s blog . Suffice to say we believe a forthcoming Tribunal in that there London is likely to feature many of our recurrent themes /recurring nightmares. Who needs a Mixed Martial Arts (MMA) bout when you’ve got Martin Morton v Information Commissioner’s Office and Wirral Council . There’ll be blood and snot flying everywhere – hopefully anyway…….