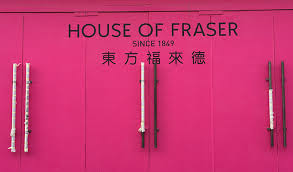 We we’re going to call this post the ‘House of Failure’. However it’s not the fault of their employees that they’ve been made redundant by Chinese-owned high street retailer House of Fraser.

However we did give everyone the heads up on this one four months ago in a post titled Get Out of Town – The Death of Birkenhead when we wrote :

Whilst there have long been rumours that House of Fraser is on the way out  -and let’s face it since the demise of Beattie’s it has rapidly gone downhill – it staggers on , but for how long?  As far as we’re concerned that would be the final nail in the coffin and then all Birkenhead will be fit for is a set for a remake of  ‘Dawn of the Living Dead’ – the zombie movie set in a shopping mall.

To which we can only say is WTAF have you been doing with our money and our mandate all these years?

Time to shout it loud and shout it clear : THEY DON’T KNOW WHAT THEY’RE DOING!

We’re afraid to say it’s time to put Birkenhead town centre out of it’s misery – misery caused by the political parasites who wouldn’t shop there even if they had a discount PICK-A-PLAN SHOP.