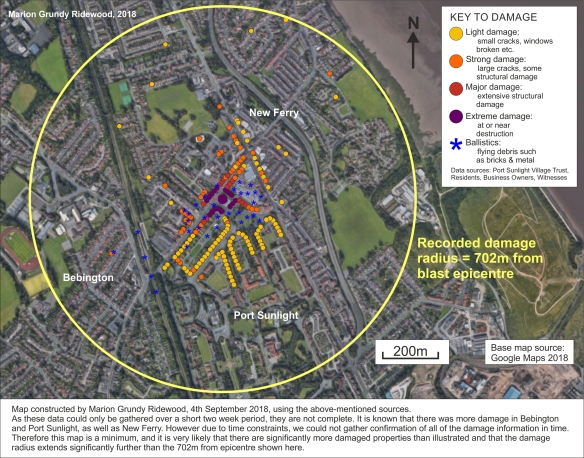 Quite rightly it has been brought to our attention that whilst the Green Belt furore continues across Wirral there is a place on the peninsula that appears to have been all but forgotten. Yes, we’re talking about New Ferry or ‘The Bombsite’ as locals have taken to calling the area devastated by a gas blast in March 2017.

Several people have pointed us in the direction of an excellent analysis of the history of the disaster and current distressing situation. We recommend that if you’re interested and you should be – Wirral is not all about wildflower meadows, dingly dells and bluebell woods ,there are Brownfield sites that need just as much attention as your beloved Green Belt – you need to check out this excellent report which is based upon the presentation given to James Brokenshire, Secretary of State for Housing, Communities and Local Government, on 5th September 2018, as residents and traders met with him at Westminster. The aim of the presentation was to illustrate to the minister that the explosion had been massively understated and underfunded, and that since no government assistance had been received, the victims and the community have been left for 18 months with no hope for recovery, and that now government should step in and help.

The New Ferry / Port Sunlight explosion WAS of the scale that warranted government assistance, and the research conducted and presented in this report proves that.

Video made with PowerPoint. Please press pause on each slide to read the content.

What we particularly applaud is the fact that there are people out there who are committed to making where they live a better place and make the effort to bring to the attention the facts ,the reality and the lived experience of those directly affected by the blast to those who can make a difference. Whilst we understand that local Labour MP Alison McGovern has been particularly supportive of the plight of the people of New Ferry/Port Sunlight we have to ask whether the ruling Labour administration at Wirral Council could have done more to highlight the desperate situation or are their priorities more about distributing misinformation about the Green Belt to support proposals for a golf resort which is far,far away ,not only geographically but ideologically, from the the people of New Ferry who contributed to voting them into power. Just sayin’…