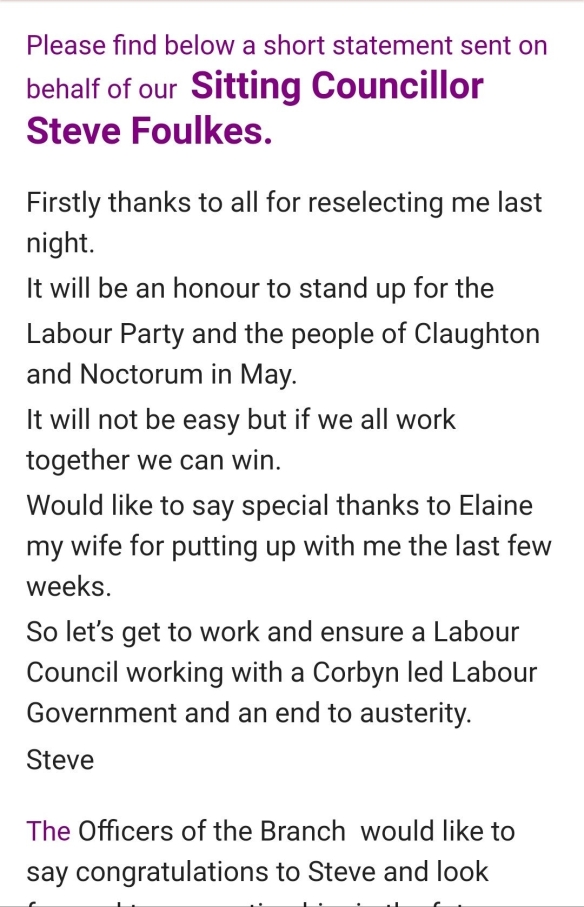 The latest news to arrive from the rounds of Constituency Labour Party (CLP) meetings is bad news for those who expressed the view – more in hope than expectation –  that Cllr Steve ‘Foulkesy’ Foulkes was next for the Labour CLP selection guillotine.

Alas, it was not to be, as in an astonishing lack of judgement we discover that Claughton and Noctorum CLP thought Foulkesy should be their representative at the local elections in May 2019.

However it must be said that Foulkesy is showing the way to go if you currently want to remain a Labour councillor – you must pledge your allegiance to Jeremy Corbyn, even if you have to fake it and it is a slap in the face of your long time political benefactor Frank Field,who has helped get Foulkesy out of many a political scrape and helped (with others) to cover up a multitude of  misdemeanours on his behalf.

Meanwhile those close to the action are expressing shock horror to us that even after our Sorrento Shame:Holidaymakers claim they faced ‘racist abuse’ from ex- Wirral Mayoress  story that Foulkesy is still considered to be a fit and proper person to represent the ward.

To which we can only reply – Oh do give over you’ve also got Cllr George Davies as a ward councillor . So obviously you don’t have a problem with alleged racism (or dishonesty).

What’s more we don’t think that being associated with allegations of racism, being utterly repellent whether it takes place at home or abroad, is  the main reasons why Foulkesy needs to f-f-f-f…fade away.

Let’s remember – this was the man who was ousted in a vote of no confidence in 2012 after it discovered that the Council he was the leader of – and by the way how did that happen? – was a basket case overrun by bullying , dishonesty and incompetence.

Unbelievably ,even after all the ‘lessons have been learned’ PR BS , worse was to follow as we reported in our WIRRALGATE! – Foulkesy the Fibber  story where it was subsequently proven that Foulkesy was a smear campaign organiser and a serial liar – as we said at the time :

Is it only us at Leaky Towers who find the  term ‘economical with the truth’ much more offensive than ‘liar’. What should we do call Foulkesy a ‘fibber’ ? – sorry we’re in no mood for polite and dare we say evasive euphemisms –  Foulkesy is a LIAR – and a well practised if not very accomplished one at that . Even when confronted with incontrovertible evidence he persists with the lies…

But then we have reason to believe that Foulkesy has a long and inglorious history of being dishonest. Could this be the same man who prior to being a councillor was caught fare dodging on Merseyrail and yet is now one of Wirral Council’s (well remunerated) representatives at Merseytravel meetings ?

Ultimately , why should we care ? Mainly because we do – but we also concede that we get the politicians we deserve or at least what Claughton and Noctorum deserve.  However we still believe that the rest of Wirral deserve so much better…

6 thoughts on “Foulkesy – Faking it ’til he makes it…”