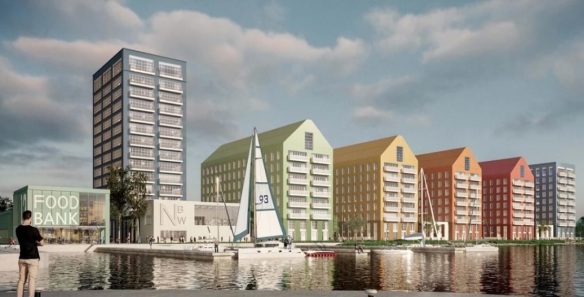 A reserved matters application for Wirral Waters One, a 500-home project at East Float Dock in Peel’s Wirral Waters will be considered at planning committee next Thursday, with a recommendation for approval.

Along with an application for 430,000 sq ft of offices in a mixed-use creative industries quarter at Vittoria Studios East, the scheme was submitted in May for reserved matters, the two applications meeting the condition set at the granting of outline consent in 2012 over the phasing of development.

The apartment scheme is proposed by Peel Land & Property and Legacy, a company founded by footballers Rio Ferdinand, Mark Noble and Bobby Zamora. The JV said in October that it intends to start work on the Glenn Howells Architects-designed scheme next summer. Comprising a mix of 256 one-bedroom and 280 two-bedroom apartments, 20% of the scheme will be classed as affordable dwellings.

Turley’s planning statement said that is design terms, “the building façades utilise a mix of materials including corrugated sheet cladding and a pre-cast construction which will provide identity and character. Bold colours will complement the existing maritime environment.”

The project is funded by Aviva and also counts the council as a partner, Wirral having agreed a business case for the project at a cabinet meeting on 1 October.

As you can see on the webcast below Planning Committee Chair and serial liar Cllr Steve ‘Foulkesy’ Foulkes  (what could possibly go wrong? ) seems to be conceding that any idea that Wirral Waters is about business development has been thrown into the River Mersey with the International Trade Centre. It’s all about investment opportunities for second home owners now – but as we’ve asked before who is going to live in these so called ‘luxury’ apartments ?

The day after all this was approved it was announced that Chief council officer quits £115,000 post after just a few months . The Chief Officer in question being Brian Bailey , who is someone we brought to your attention when he was appointed in our  Peel, Pillow Talk & Forked Tongues post. We are left wondering whether Bailey’s decision to quit has anything to do with developments (or non-developments) or he’s been in touch with his old mucker from Blackburn & Darwen Council and former Wirral Council CEO Graham Burgess? – ” What’s that you say Bri, Foulkesy is chair of the Planning Committee and  George Davies is the Cabinet member responsible all this ? They and their protector Frank Field were my undoing . My advice would be to get out before they’re out to get you!”

We also ask ourselves whether there could be another clue in the Place North West Wirral Waters promo :

No major issues with the proposal are highlighted by statutory consultees, with the only potential sticking point being a notification from the council’s housing officer that depending on level of occupation, some apartments could fall below the threshold of the Nationally Described Space Standards, although Wirral has in any case not yet adopted NDSS.

So basically can we deduce that Wirral Waters is to be reduced to rabbit hutches offering high yield returns for rich investors – if they can get anyone to live in them!

12 thoughts on “Wirral Waters and That Sinking Feeling”