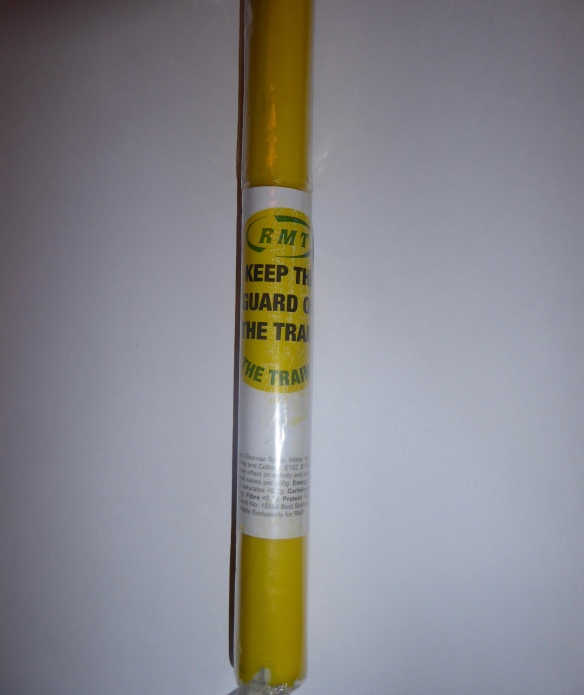 We’d like to thank the Rail,Maritime & Transport (RMT) Union for the little stick of rock that found itself in this year’s Christmas stocking. How thoughtful of them to match the colour of the confectionary to not only the livery of Merseytravel but in solidarity with les gilets jaunes and the current colour of rebellion.

Now we haven’t always seen eye to eye with unions (and Unison in particular) but we’re quite happy to support righteous and concerted causes such as the Cammell Laird ‘Turning the Tide on Casualisation’ action organised by GMB and Unite  and the RMT campaign to maintain guards on the trains.

What we’re not so happy to report is former Wirral Council spin doctor Emma Degg gegging in on the latter situation and squarely blaming the disruption to Northern train services on ‘strike action’  :

Emma Degg, Chief Executive of the North West Business Leadership Team (NWBLT): “We welcome this proactive initiative on the part of Northern to seek to resolve the ongoing strike action that has caused so much damage to our region’s economy. We hope both sides can work together to deliver the much-needed improvements that are planned to our railways in 2019.”

We’re not usually concerned with what comes out of Degg’s mouth but we have to say we    doff our cap to this consummate player with the great connections – making her a mover and a shaker in the North West, commenting on matters of regional significance and from what we hear, still harbouring political ambitions. But then you know what they say  – you can’t keep a good woman down (insert own joke here).

Unfortunately, from our perspective , the people running the show are the appeasers who are given a platform to appeal for reasonableness and wanting everything to be as nice and pleasant and comfortable as their own existence without acknowledging that some people’s lives are brutal and tough and their livelihoods are at the whim of so-called ‘leaders’ .

Dare we a suggest that those who lack the political and personal guile to ‘succeed’ as ‘leaders’ need to be a bit more Gallic in their outlook and and be more like les gilets jaunes – a little less civil, a little less servile , a little less obedient…