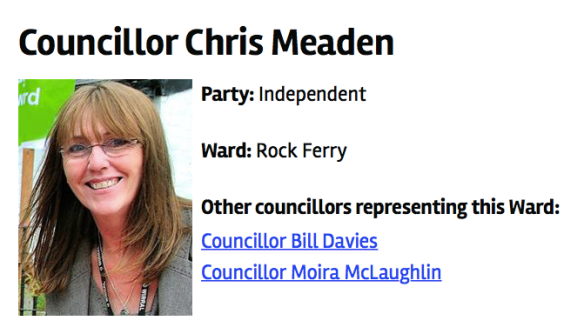 We were alerted to the fact that Cllr Chris Meaden had changed the party status on the Wirral Council website and that she now classed herself as ‘Independent’.  This struck us as somewhat ironic as Cllr Meaden aways struck us as one of those councillors who did as they were told by the local Labour Party elite and was quite content to be swept along on Rock Ferry councillor Moira McLaughlin’s coat-tails as it was an easy ride. We were once again minded to recall that old joke  Q:   What’s the difference between a supermarket trolley and Cllr Chris Meaden ?  A:  A Supermarket trolley has a mind of its own.

The belated declaration of ‘independence’  was all very reminiscent of an adolescent flouncing off  Facebook when no-one is paying them any attention and hoping for a few ‘U OK Huns ?’

Despite the Liverpool Echo headline  Yet ANOTHER top Labour politician quits party -blaming ‘hard-left’ takeover  our initial reaction to such a political hasbeen was CBA.   However reading the local media coverage it is clear that Meaden  has taken her acting out her adolescent angst to another level and be seen a-bitchin’ and a-snipin’ and a-moanin’ all over the local papers (the story in the Wirral Globe written by the same ‘Local Democracy Reporter’ Tom Houghton is a barely disguised re-write ) . As washing your dirty linen in public goes, the soon to be ex- councillor Meaden seems to have dug out the skiddy undies from the bottom of the washing basket , talking of ‘verbal attacks’ , ‘public attacks’ and ‘double standards’ . Much of her bitterness is directed towards Yvonne Nolan , her successor as Labour Party candidate for the Rock Ferry ward.

I believe over the coming months more information about Ms Nolan`s past involvement with politics will emerge and I don’t believe she is fit to serve the people of Rock Ferry. With her term coming to an end this spring, Cllr Meaden was ousted at a selection meeting back in October. But she said some of those present had “never attended” a branch meeting, while others had “never so much as delivered a leaflet’.That makes me believe that the meeting was packed with the aim of removing me and replacing me with Yvonne Nolan and the intention is to bring her in to lead the group.

Now we can’t comment at this stage whether Nolan is fit to serve the people of Rock Ferry but we do know that there are a few current Labour councillors who are DEFINITELY unfit for public office but has Cllr Meaden ever publicly voiced her concerns about them?  No, she hasn’t ! – and it suggests to us that the Rock Ferry selection committee made the right decision in getting rid of someone who was quite happy to follow the orders of a PROVEN dishonest,bullying and controlling Labour cabal whilst it suited her which makes her  declaration of independence nothing more than an exercise in pointlessness.

6 thoughts on “Cllr Chris Meaden : Not so much a declaration of independence as an exercise in pointlessness”