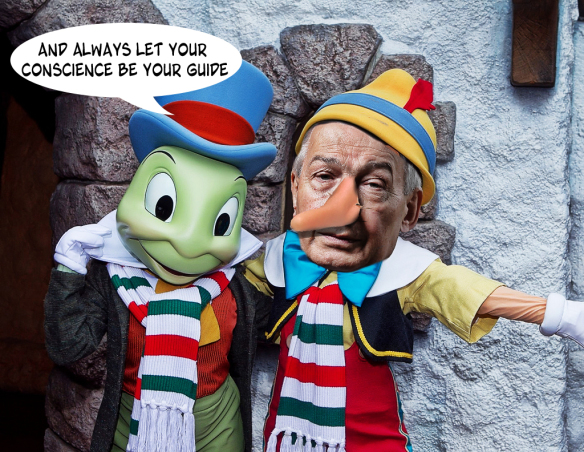 Well that’ll be a first! we all cry at Leaky Towers.

And what you might ask has inspired this latest portentous statement by the Birkenhead MP with a particular flair for melodrama?

Well, this is an interesting little story that just might become a very big story indeed. The quote above comes from an excellent piece in Schools Week titled DfE policy adviser leaves trust amid finance investigation. We admit it is not one of our regular reads but our readers are an educated bunch and one of them tipped us the wink about this particular story which concerns :

A chief executive and operations manager at an academy trust have left their posts amid an internal investigation over a budget black hole supposedly totalling several hundreds of thousands of pounds.

Quinn is a member of the secondary headteacher reference group, a select group of “leading headteachers” that advise and influence the Department for Education’s policy development.

A statement from the Diocese of Shrewsbury, which founded the Wirral-based trust, said Quinn and Mitchell left “with the mutual consent of the trustee directors” on Thursday. Quinn also served as executive headteacher at the Holy Family’s St John Plessington Catholic College. The school’s chair of governors, John Williams, has also resigned.

Schools Week understands that an internal financial investigation is ongoing surrounding potentially several hundreds of thousands of pounds of cash missing from the trust’s budget. The trust would not comment on this allegation.

Needless to say Wirral Leaks has already run several stories on the Frank Field Education Trust and the questionable connections that Frankenfield has made in the set up of this almighty (no pun intended) and monumental vanity project. Liverpool Echo have belatedly caught up with their Super head who left role a week ago amid investigation has ALREADY got a new top job story where Field comments  : “On behalf of the Board, we are looking forward tremendously to working with Tom in boosting the life chances of children who, without his ability, would have opportunities denied to them.” The Frank Field Education Trust itself did not comment on the little local difficulty involving Tom Quinn and his sudden departure from the Holy Family Catholic Multi-Academy Trust and St John Plessington Catholic College.

However Field is a lot more forthcoming in Schools Week. After the Frank Field Education Trust refused to comment on the grounds that there was an ongoing investigation the man himself was up to his usual tricks and when questioned about the Holy Family’s ongoing investigation, Field added:

As things unfold, we must try and understand why people have tried to bring down one of our great headmasters. The most important thing for me is to bind myself with Tom. I have never ever doubted his qualities, his brilliance in teaching, his honesty.

At stages in the future, people will have to account for their actions. I’m willing to answer for mine.

Oh, if only that were the case! We can only hope and pray that one day those final words will come back and bite Field hard and where it hurts most – his ego. All we do know that whilst at this stage we can’t comment on Mr Quinn’s qualities – good or bad – we do know that based on the dodgy acolytes and dubious chancers that Field has surrounded himself with over the years that he has consistently proved to be an appalling judgment of character…

11 thoughts on ““At stages in the future, people will have to account for their actions. I’m willing to answer for mine.” – Frank Field”