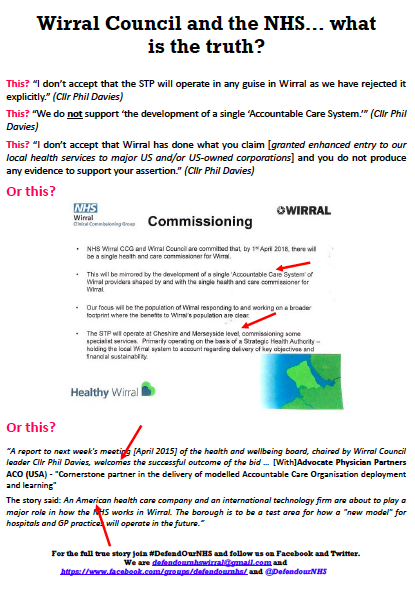 In advance of a report of tonight’s public meeting at Birkenhead Town Hall where the headline issue is the threat to close all Wirral’s NHS walk-in centres we provide some background information indicating that this threat is the tip of the iceberg. Which is an appropriate metaphor as what Wirral Council and Wirral Clinical Commissioning Group  (CCG) are doing is rearranging the deckchairs of Wirral’s NHS Titanic.)

The fundamental issue is that the Council and CCG have amalgamated health and care services and ‘pooled’ related budgets. (This will end in tears.)

To finalise the shenanigans on 16th October they will sign something called a Section 75 agreement (laid down by the Tories in their 2012 Health and Social Care Act). Incredibly the agreement has not been shown to Wirral councillors on the scrutiny committee, let alone the public. And they have refused to release the associated ‘due diligence’ report until the same date even to their councillors!!! The ‘due diligence’ was done for £40 by the very very iffy PricewaterhouseCoopers (PWC).

The Labour Party nationally is dead set against S.75 because it allows whatever is its subject to be subsequently contracted off (as will be inevitable as the two parties discover that trying to do twice as much with two slashed budgets is not an easy trick to pull off and so they will have to sub-contract the mess to the highest bidder).

But then the Labour Party nationally (and apparently some of its councillors locally – who knew?) are dead set against most of what Cllr Phil ‘Power Boy Pip’ Davies is seemingly prepared to go along with.

It could, for example, end up with a group of GPs bidding for the contract… or a health company of which some Wirral GPs are very fond? Only speculating, of course…

There is a judicial review of the contract about to be heard so the whole caboodle could end up being illegal! http://999callfornhs.org.uk/999-judicial-review-aug-2018/4594401565

Pip could land in deep water with the law – and with his party nationally.  But does he care?

Whilst we’re familiar with the old refrain – ” April fool is past and gone , so you’re the fool for carrying on….”  we felt that the following leak was too significant to be included in our  Wirral Leaks Weekly Dispatch #10 and have instead chosen to post separately, if belatedly , today :

“I’m not in the Labour Party and have no wish to be drawn into their internal rows. However I notice that the final item in the screenshot in your post below refers to  Cllr Phil Davies vowing  “that Wirral council are doing all they can to stop ACS’s in the NHS…..

He’s opposed to the ‘STP’ (Sustainability and Transformation Partnerships), he’s opposed to the  ACS (Accountable Care System)  , so how does he explain his own Council’s policy to implement both – from 1st April 2018 ?

See the screen shot above from a presentation to staff by Wirral’s  Director of Adult Social Services Graham Hodkinson (who by the way, also from 1st April 2018 , becomes the deputy at Wirral Clinical Commissioning Group (CCG) , thus committing  Wirral Council into NHS England’s plans to ‘slash, trash and privatise’ the hand that feeds them very well indeed).”

Perhaps Pip can feed this back to the Birkenhead Constituency Labour Party (CLP) at their next meeting or is he quite happy to continue to make fools of both his Labour colleagues and Wirral’s constituents?