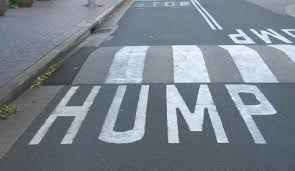 We’ve been contacted by a local Wirral resident who’s got the hump with Wirral Council .

So what ? – join the queue we hear you cry !. No  , bear with us ,  it would appear this person may be getting the hump whether they like it or not. Road humps to be precise.

We are told that in his election leaflets that George Davies Deputy Leader of Labour Group ,  Cabinet Member for Housing and Community Safety and Labour Councillor for Claughton Ward made reference to road improvements and a consultation concerning the problems caused to local residents by the parents of St. Anselms and Birkenhead High School afflicted with school run psychosis.

Our concerned resident emailed Cllr Davies to seek clarification, and was advised this would be outlined in due course and made reference to a sum of funds allocated to the traffic calming scheme that our source would apparently remember although they inform us that they were unaware of this being publicised at any time.
Our source writes to us :
‘Surprise, surprise the proposals were unveiled a week after the election – given that all the neighbours I have spoken to thus far are vehemently opposed to the proposals, I imagine that the councillor was unwilling to unveil this prior to the election.
For the sake of me I cannot understand why these proposals have been put forward, other than to ensure that the money is spent, since it fundamentally fails to address the problems it is seeking to resolve.’
And writing directly to Cllr Davies they asked :
‘Whilst I am aware that as governor of two schools you may well excuse (or be required to be excused) yourself from many of the formalities,  I trust the interests of the residents, which elected you and whom you represent, will take priority in your decisions, and the considerations of all local councillors.’
We’re not sure whether our source is familiar with how exactly Wirral Councillors operate but the “interests of residents”  are seldom a priority and furthermore we anticipate they may have a hard time  getting answers to the following questions they’ve raised in a formal objection.These questions include :
Whether the consultation is part of a planning condition associated with development of Birkenhead High School Academy  and , was this formally conveyed to residents affected at any time?
Why was this notice not issued prior to recent local election – who decided on timing, and why?
How many traffic accidents have there been in the last four years in the areas affected and how many people were injured?
Are any of the roads covered by the proposals deemed to be amongst the top 5% of roads in the Borough for frequency of accidents?
What is the average speed of vehicles during term time, and in the peak traffic periods associated with school collection / drop off – NB not during the rest of the day – when was the traffic study undertaken?
What is the cost of the construction of the measures?.

How were the location of the humps calculated?

When will the work be undertaken – if approved, and what would be the timescale ?.

Which councillors are members of Birkenhead Constituency Committee, and were appropriate did they excuse themselves from voting if they were governors of any of the schools concerned?

Are the funds allocated for the scheme ring fenced, would they have to be surrendered if the scheme did not proceed?

Unfortunately our source will not be able to raise these issues directly with Cllr George Davies or the Birkenhead Constituency Committee as the meeting planned for May 26th has now been cancelled – just like the one before it – so that Birkenhead constituents won’t have had a meeting in six months and meaning that local democracy and public accountability still don’t seem to be on the agenda!.