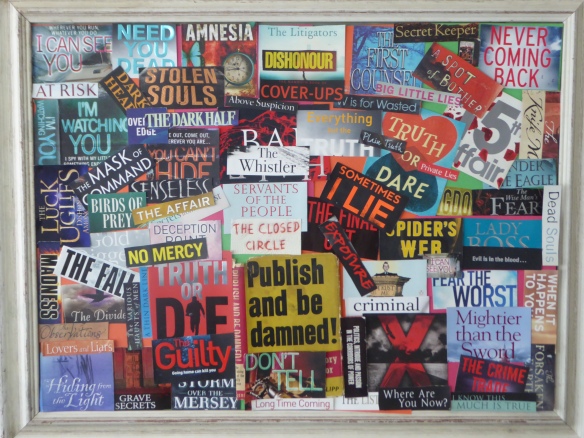 Our thanks go to one of our readers who has sent us some eye-popping pop art. At first we thought to ourselves :  “Here’s someone with too much times on their hands and a penchant for pulp fiction. Quick! Press the ‘Block’ button .” However they went on to explain that the above collage was specially created to commemorate the appointment of  Wirral Council leader Cllr Phil ‘Power Boy Pip’ Davies to Arts Council England. Although we’d all be be forgiven for thinking the appointment was to the Arse Council knowing as we do that the nearest that Pip gets to culture is licking the lid of the yoghurt pot ( now there’s an image to haunt you for the rest of the day).

Our featured artist who goes by the name of Toulouse Le Plot further explained that their kids helped them with ‘the muriel’ as a) it was the school holidays b) it was never too early to teach your kids about local politics and yet be creative at the same time.

However back to the latest Pip appointment. His  place on the organisation’s North area council follows a visit to Wirral by its chief Darren ‘Hooray’ Henley, who inevitably described Wirral as a ‘creative hub for the entire region’.

Yes , Tristram  – whatever you say sweetheart. Our Hugo then went into luvvie-overdrive:

“As I stood in Birkenhead looking across the River Mersey to Liverpool’s impressive skyline with its stunning mix of old and new architecture, I was reminded of a recent visit to New York.Just as the Wirral look across the water towards Liverpool, so Brooklyn stares out across the East River towards Manhattan.The latter has traditionally been thought of as being the glitzier of the two areas, with its towering skyscrapers dominating the landscape and looking down on the other less successful parts of the city. But for me, it’s Brooklyn, on the other side of the river, where one of New York’s more exciting stories has unfolded over recent years. Following a sustained and well thought out programme of investment, it’s now a hotbed of creativity, with artists, designers and techies making this formerly rundown neighbourhood an exciting and vibrant place to live and work.Derelict buildings have been brought back to life.They’re now thriving creative communities, home to a network of makers who imagine, invent and build everything from traditional craft products to high end computer software.

As I stood in Birkenhead, it struck me that Brooklyn is a model for the Wirral…”

Has Rupert been drinking in the Brew Dog bar with Wirral Council CEO Eric ‘Feeble’ Robinson ?-  ” Mine’s a pint of ‘Desperate Illusion’ what are you having old chap? I thoroughly recommend  ‘Mersey Mirage’ created by local artisan brewers Chimera & Artifice’ . Don’t worry dear boy we can put it on expenses…”

Did Giles and Eric independently come up with the ‘Birkenhead Should Be Brooklyn, Not Another Manhattan’ tagline? Or is it a case of deluded minds think alike?

As he seems to be so enamoured of the place no doubt Sebastian is eyeing up a penthouse suite in one of the thousands and thousands of luxury apartments that Peel Group are currently building on Wirral Waters. Perhaps when Sebastian moves in we can make a house-warming gift of a limited edition signed print of our commemorative collage . As a mash up of the local art and political scene we’re sure Tarquin will give the picture pride of place in his pop up art gallery .