A couple of Wirral Leaks readers have been in touch seeking clarification on last night’s Brexit vote after hearing on the BBC local news that ALL North West Labour MPs voted against Theresa May’s Brexit deal. This would appear to be very poor reporting or deliberately misleading information from the BBC – nothing new there then!

The confusion arose after they’d earlier received this message : 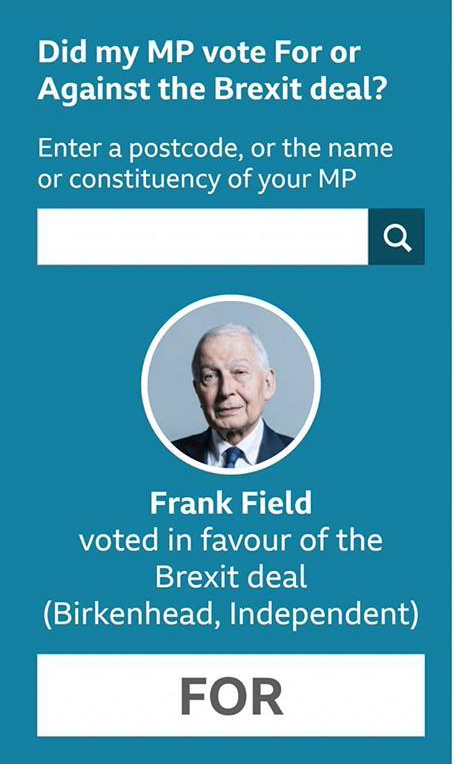 Here’s how the Liverpool Echo reported how Merseyside MPs voted : 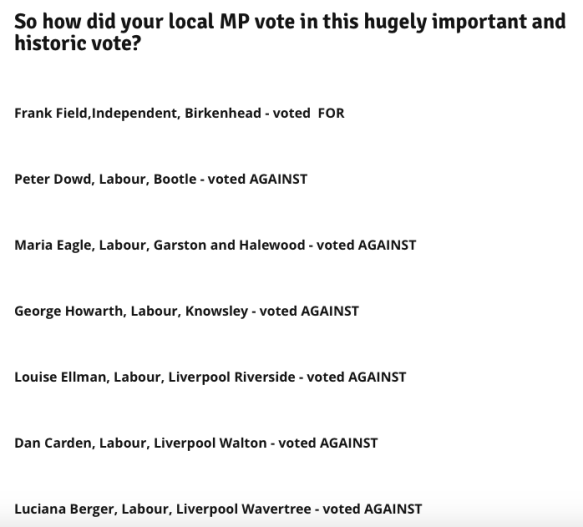 We  await with interest how today’s ” No Confidence” vote in the House  of Commons goes. We know at least one North West/Merseyside/Wirral MP who won’t be looking forward to a General Election should Theresa May lose … 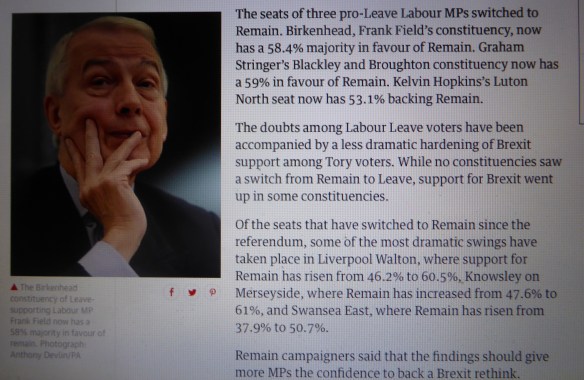 Needless to say we made our own Wexit (Wirral-exit) a while ago. However it would appear there is no escape from Brexit and the never-ending Shakespearean feud between the Brexiteers and the Remainers/ Remoaners.

An interesting development to report on the local front is the results of a poll reported in The Observer undertaken by researchers at Focaldata who have compiled the breakdown by modelling two YouGov polls of more than 15,000 people in total, conducted before and after Theresa May published her proposed Brexit deal on 6 July. Their analysis shows voters in most constituencies now favour remaining in the EU.

This includes Birkenhead, Frank Field’s constituency, which apparently now has a 58.4% majority in favour of Remain ,having had a 51.7% majority to leave when the Referendum was held .

Yes , we only it’s only a poll and yes, we know the report is in the pro-EU Observer but we thought it was both an interesting indicator and potentially an intriguing challenge for Field.

…and yet somehow justifies his recent voting record on Brexit by claiming that he is reflecting the views of his constituents who voted to leave!

Of course we also know that Field is the consummate politician , which is absolutely not meant as a compliment, and no doubt he will continue to pirouette his way through this political minefield. But for how long can he continue to swing both ways  – on the right and always right. 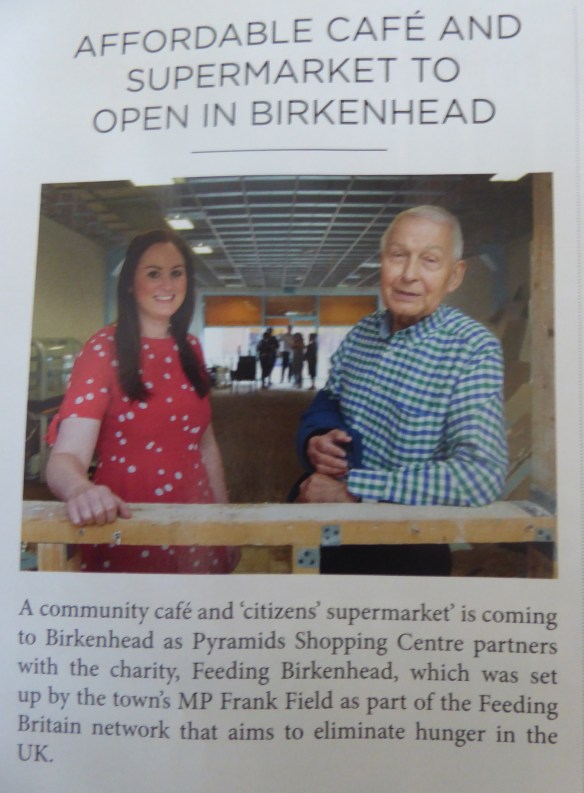 Concerned Wirral Leaks readers have been in touch asking us whether we know anything about how Birkenhead MP Frank Field ended up with a cast on his arm.As you can see from the above publicity shot taken at a community cafe and citizen’s supermarket in the Pyramids shopping centre. This picture which has been seen all over the shop including what we understand to be Frankenfield’s first of soon to be many appearances in the glossy and vacuous Wirral Life magazine. One of the queries we received from someone who saw the picture asked : “What happened to Onan the Librarian?”

Which after this week’s Exclusive : Will Frank Field have the Labour Whip withdrawn?  story may not be so far from the truth. This exclusive has since gone national after being picked up by the Huffington Post in their Labour Members Move To Suspend Brexiteer MP Frank Field For Backing Tories post.

Now thanks to correspondence (see below) from another Tory MP, Esther McVey, we can reveal that Frankenfield has broken his arm. We will make no comment on other people’s misfortune. We just wish that the Birkenhead MP would do the same. As you can read he continues to make emotive references to particularly sad cases in his letter – which let’s face it will be totally wasted on McVey ,who as you can also read, is as policy driven as Field is publicity driven. Although ,as we’ve reported before, McVey is herself no stranger to exploiting others plight for political gain. But then again why should we expect political animals to fight their nature?

However back to our picture at the top which shows Frankenfield  and a.n.other. The woman on the left next to the man on the right (!)  is not even credited in the Wirral Life story as this is strictly The Frank Field Show. But is everything as it seems  ? A source writes to tell us that :

Feeding Birkenhead Social Supermarket that is due to open in Birkenhead has been donated £100 thousand pounds from Cammell Laird and also Labour too – complete with the re fit. No argument from me that more Social Supermarkets are opening BUT it is not open to all…  only 100 people who have been “picked” from Magenta housing will be able to shop there for 6 months…

What’s more (and we’re going to bang on about this  ’til we’re red in the face) is Feeding Birkenhead and this enterprise in particular is funded by WIRRAL COUNCIL or should I say WIRRAL COUNCIL TAX PAYERS and Magenta Living to the tune of £80,000.  The minutes of the Birkenhead Constituency Committee from January 2016 read :

Once established, the Task and Finish Group was also requested to consider a request from the Chair for £80,000 of Your Wirral funding to be used as a block grant towards a new Community Shop in the Pyramids Shopping Centre and should this request be agreed to, a formal request from the Committee be made to Magenta Living.At this point Councillor S Foulkes declared a Personal Interest by virtue of his being a Board Member of Magenta Living. Full minutes here:  Your Wirral

I’m sure you can all see how this works and we don’t need to repeat our concerns about the Magenta Living connections. But it all perpetuates the myth that ‘Feeding Birkenhead’  is a Frank Field and the local Labour Party production. Whilst the Birkenhead MP has been the driving force behind the initiative it would not have happened without public money. ‘Your Wirral’describes itself thus :

Your Wirral is a fund administered by Wirral Council and Wirral Partnership Homes (now Magenta Living)  which offers grants of up to £2,500 for community or voluntary groups right across Wirral to fund one-off projects or events.

Which leads us to wonder where the £80,000 for the Feeding Birkenhead  Social Supermarket came from? Is it any wonder that the Wirral Council website reads :

Your Wirral was a community grants programme and a joint initiative between Magenta Living and the council. Your Wirral has now ended in Wirral West, Wirral South and Wallasey constituencies. The Wirral-wide programme, for projects that affected two or more constituencies has also ended.

The Birkenhead Your Wirral fund is currently closed for applications.

So it would appear to be the case that for any other community or voluntary groups seeking grants on Wirral that unless you’re part of ‘Feeding Birkenhead’ the cupboard is bare – and much like the ‘citizen’s supermarket ‘ public money is for the few and not the many! 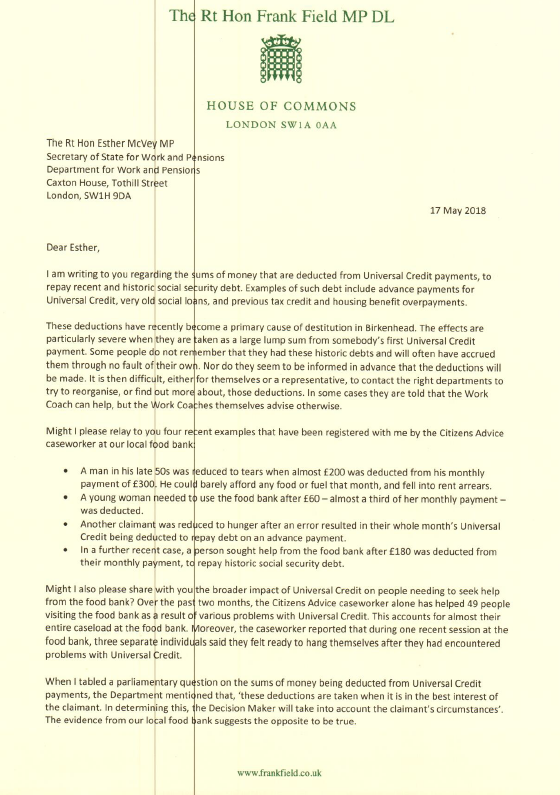 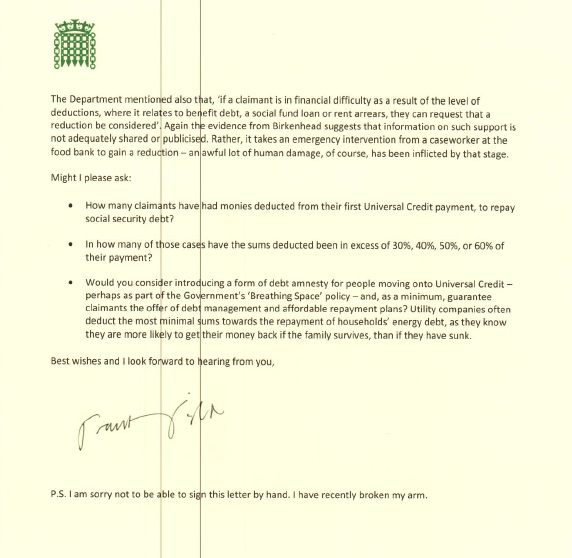 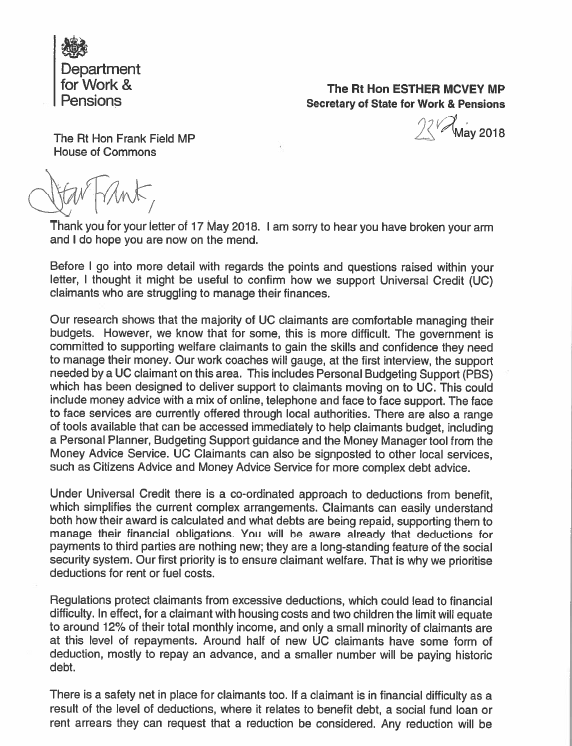 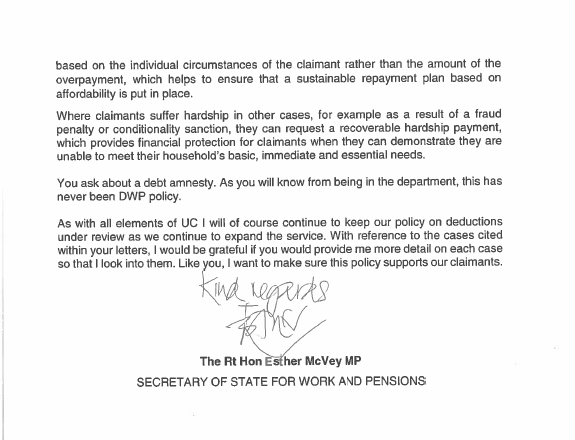 A special Wirral Leaks Brexit quiz to keep you all amused/bemused for two seconds.

Can you guess which one of our 4 Wirral MPs sided with the government on a crucial Brexit bill?

Who are the Labour leavers who just bailed out Theresa May?

There are no prizes for guessing…

Birkenhead MP Frank Field ,  having moved an amendment to the European Union (Withdrawal ) Bill earlier this week must be grateful that the local TV media chose a clip of Wirral South MP Alison McGovern’s contribution to the House of Commons Brexit debate for their news bulletin rather than his latest waspish display of self-aggrandizing disrespect for others. Therefore we’d particularly like to thank Old Queen TV  for posting the above footage.

Field’s innocuous amendment read : ” The UK ceases to belong to the European Union on 30 March 2019″ and  we can say one thing about Frankenfield and that he united the House during the debate  – united that is in their distaste of his sly jibes.

The most spectacular putdown was of fellow Labour MP Hilary Benn which drew gasps from benches on both sides of the House. Sitting behind Frankenfield David Lammy looks simply aghast……and who wouldn’t be as Field snipes at Benn : ” I’ve always bought my houses, I’ve never inherited them……”  . On being corrected by Benn he apologised and withdrew the comment. However the snooty, sarky tone of his statement , part Lady Bracknell/part Lily Savage, continued unabated.

The thing is with Frankenfield is that locally he is so used to saying what he likes to who he likes – and being gifted a platform to do it – that it comes as a bit of a surprise when someone dares to challenge him on the facts.

However there were several other comments Frankenfield made during his speech which led to us sit here scratching our heads with our mouths agape. The full transcript of the debate can read here 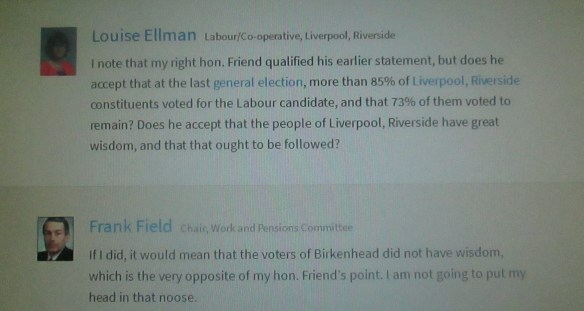 We’re confused as to what Frankenfield is trying to say in these statements . However it  should be noted that overall 51.7% of the voters of Wirral voted to remain in the  EU Referendum , whilst  his own constituency  voted 51.7% to leave . 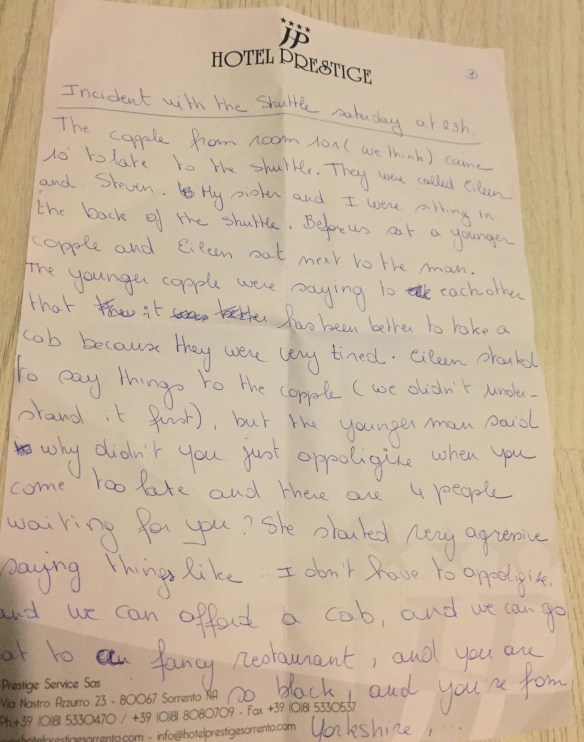 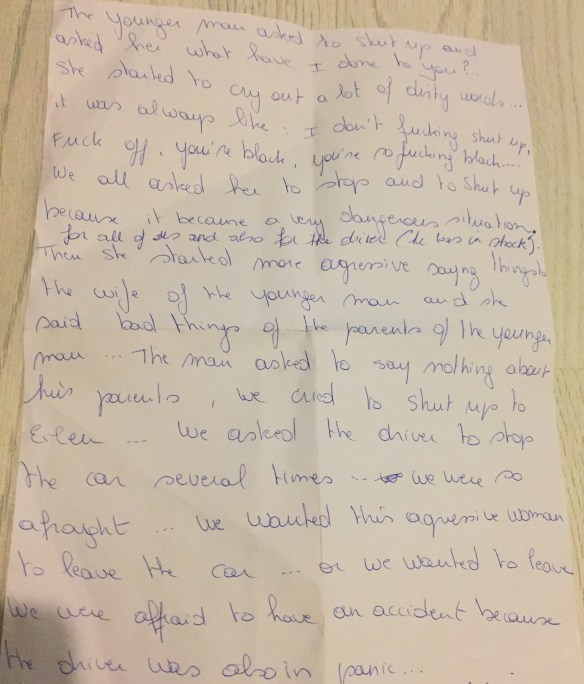 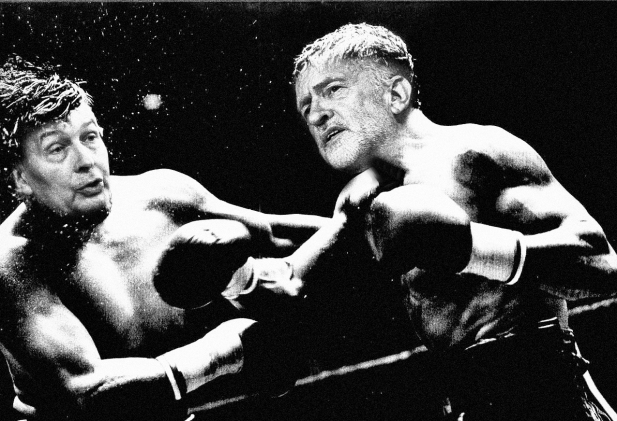 Call us the ‘Imp of the Perverse’ if you must but we were delighted that the Labour Party did much better than predicted in the General Election.

Of course this was mainly because that after Birkenhead MP Frank Field’s continual sniping and undermining of Labour leader Jezza Corbyn and Wallasey MP Angela Eagle’s failed leadership coup against him , both of them now look rather foolish, duplicitous and frankly out of touch with their own Labour Party members (no change there then!)

Of course we know that Corbyn was assisted by the calamitous campaign of the Conservatives and he’s getting a bit carried away with himself when he says ” It’s pretty clear who won the election”  . Sorry to have to tell you Jezza it wasn’t you or the Labour Party in terms of votes cast ,seats won or percentage of the overall vote (44% – 41%) and let’s not forget the Conservatives – with the dubious assistance of the Democratic Unionist Party – are still in power.

Nevertheless it was a jolly good show – and after Brexit and Trump yet another two finger salute from the public to political pundits.

It must be galling for Frankenfield in particular, to have to say through gritted teeth and prissy pursed lips :  “This is real success for Labour and Jeremy Corbyn”

After all,could it be that only on May 16 Frankenfield became the first Labour politician to call for the party to split after the election following what The S*n  described as an ‘expected election thumping’. Described by this disgraced organ as “the respected Labour grandee” ,they reported that Frankenfield had called for MPs to form the “People’s Labour” bloc in the Commons if Jeremy Corbyn refused to quit in June.

We’ve got news for you Frankenfield, Jezza ain’t goin’ nowhere ( although we can’t say the same about Tory leader Theresa May!)

So tell us Frank – do they serve humble pie in those foodbanks of yours?………..