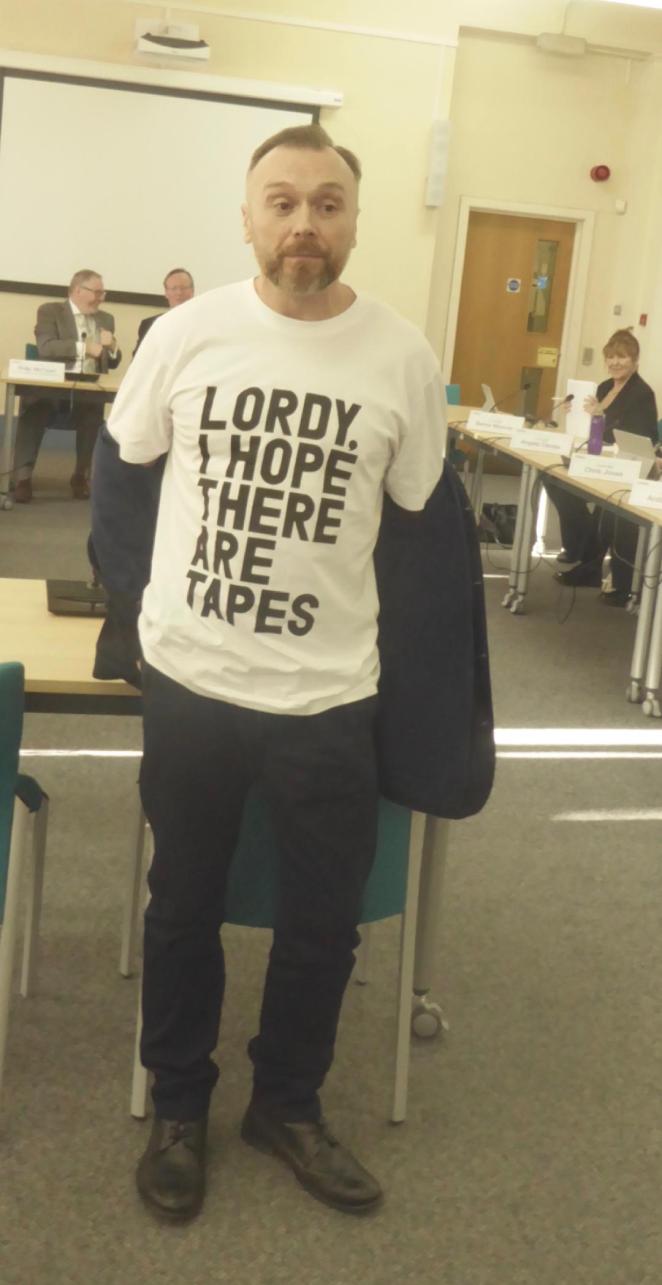 As we predicted in Sunday’s  Hoylake Golf Resort : Protest and Protect post the start to the week would be a challenging one for the ruling Labour administration at Wirral Council.

However we couldn’t have predicted that it would start so early with an unexpected surprise at the end of what seems to be the dreariest Wirral Council meeting ever. As you can see from our exclusive footage serial whistleblower Martin Morton makes a return to the scene of many a crime. We are grateful for his son for forwarding the footage , apparently Morton Jnr is at University studying film and is making a video about whistleblowing. Should be essential viewing and if it involves Wirral Council –  x-rated!

Of course we just took that the message on Morton’s t-shirt – LORDY, I HOPE THERE ARE TAPES – was addressed directly to us at Wirral Leaks. Is this an example of what is known in modern parlance as ‘meta’? For as we know ‘His Lordship’ has known about Wirralgate since 2013 and knows that there are tapes (as does Mr Morton and many others) and which would (and should have) brought the corrupt ruling Labour administration crashing down a long time ago .

However we appreciate that for many of our readers and the wider public that the origins of the quote on the t-shirt may be somewhat obscure. We’ve done a bit of research and apparently these are the infamous words of former FBI Director James Comey commenting on alleged recorded conversations between him and US President Donald Trump.

Unfortunately you won’t see the footage on the Wirral Council website or, rather disappointingly on John Brace’s video coverage – although we understand that he wouldn’t want to spoil the enjoyment of the 4 people who have endured the video so far.

Unfortunately there is no sound but we understand that belligerent Cllr Bernie ‘The Bruiser’ Mooney shouts out :

and you can lip read Mr Morton’s reply :

Apparently the cheeky wave from Morton was directed at Wirral Council’s Head of Communications Kev ‘Lost Boy’ MacCallum who was sitting there stony-faced and cross-armed and you can see Cllr Phill ‘Two L and Back’ Brightmore leaving his seat to get a good look at the message on the t-shirt. Meanwhile the three wise monkeys at the back ( Head of Law Philip McCourt, council ‘leader’ Cllr Phil ‘Power Boy Pip’ Davies and council CEO  Eric ‘Feeble’ Robinson appear to be having a jolly good laugh at Morton’s expense )

Watching that sickening section of footage (we advise you watch it on full screen and focus on the three of them) we can’t help thinking that Morton should have pulled this stunt way back in 2013 at the Improvement Board meeting where Power Boy Pip couldn’t even stay in the room when Morton spoke. Now, like a typical coward –  and oh how weakness and cowardice have characterised his political career – Pip feels confident with  a room full of cronies behind him to LOL.

We’re left wondering as to who will have the last laugh?  History tells us it will be Pip and co – but that’s only because other people who had the means to do something about it, have instead, simply allowed it or in some cases through fear or favour , facilitated it. Shame on you all…

More leaked emails from Wirral Council featuring correspondence between Liberty Antiques shop owner  Sean Martin and various councillors is most illuminating on the political machinations that are going on behind the scenes.

We’re confident that our campaigning friends at Wirral Against The Litter Police (Kingdom Security) understand the motives of a ‘Tory-Come-Lately’ or a ‘Labour Appeaser’ as clearly there is much political capital that can be made from the increasingly contentious situation in the run up to the local elections in May.

Our main concern is that the current ruling administration would rather stick with a highly unpopular course of action than be seen to cave in to public pressure . The same approach also applies to the plans for the Hoylake Golf Resort/Celtic Manor Resort and the publication of Wirral View.

This also seems to be the approach of Cllr Anita Leech , Wirral Council Cabinet Member for Environment about whom it is alleged knows nothing of Kingdom’s actions – which is simply either untrue or a failure of scrutiny. Although it must be said from other comments she’s alleged to have made at least she seems to be upfront about her motives – money for Wirral Council and political power for her party.

Liberty Antiques <libertyantiques@gmail.com> Thu, Feb 14, 12:10 AM  to all Wirral councillors

Good morning all Wirral Councillors I received a call today from a small business owner in Pensby who had just received a £300 fine from Kingdom. This is what he said to me: “I feel that Wirral Council have given someone the authority to enter our premises and take £300 from our till and there is nothing I can do about it” As an elected councillor whose job it is to serve the public if you think what Kingdom are doing is right you have lost touch with reality and you should be ashamed of yourself.

Your views on this matter would be welcomed

Thanks for the copy of your message to councillors. I totally agree with you. It was a discrace (sic) for Kingdom to behave in the way they did. However, I understand that our Cabinet Member responsible for Waste was not aware of Kingdom’s actions and she has now ordered them to cease the practise until council officers have investigated what is going on and reviewed the policy.

I am sorry sir but you are deluded if you think that. Her own constituents have been telling her for the last 4 weeks and she has been rude and dismissive with quotes such as “the council need the money” and “it’s either us or the tories so take your pick” . My local representatives Pat Hackett and Tony Jones have been canvassing her for the last 2 weeks without success. Pat Hackett actually asked her to come down to meet us and listen to our concerns and she ignored his request

I stand over my beliefs

For those of you who peruse the Wirral Council calendar of meetings and who might be wondering what the Extraordinary Meeting called for 25 February 2019 was all about we can exclusively reveal, courtesy of the above leaked email, that it’s all about the Hoylake Golf Resort (aka Celtic Manor Resort).

As you can see the letter requisitioning the meeting emanates from the Wirral Council Conservative Group : 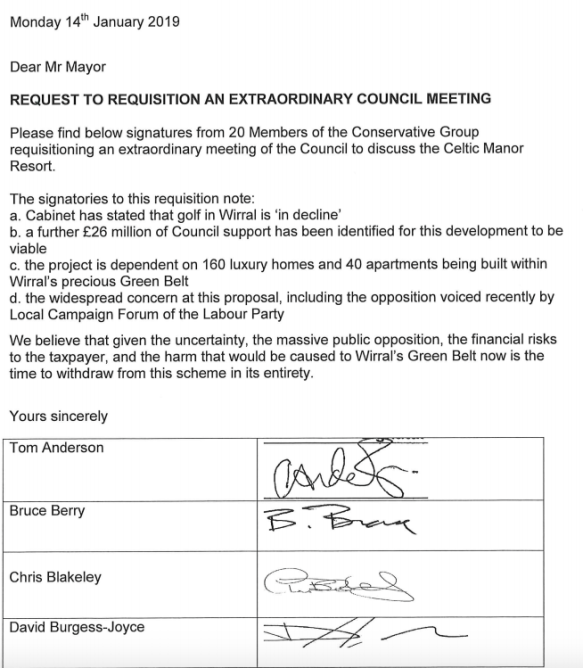 Now where do you think the ever opportunistic Conservative Group might have read about ‘the opposition voiced recently by the Local Campaign Forum of The Labour Party’ ?

We’ll give you one guess : Hoylake Golf Resort : ‘Wirral Local Campaign Forum reflects the views of the members which may at times differ from the Labour Group’

Whilst a credit would have been nice we are more than compensated by the thought that the Extraordinary Meeting will be a test of Wirral Council leader Cllr Phil ‘Power Boy Pip’ Davies’ ‘leadership’ (no laughing at the back) . After all Pip has bewilderingly pushed for this misbegotten development against all known reason, logic and finance and after the sinking of Wirral Waters courtesy of his naive faith in Stella Shiu this was presumably to be his ‘lasting legacy’ on Wirral (we can  make some suggestions as to what his lasting legacy really should be but we’ll leave that for a later date )

Not only will Pip face opposition from the Conservative Group and presumably the might of the Green Party ( yes,that’s you Cllr Pat Cleary) but opposition within his own ranks of newly elected or up and coming councillors who will no longer do as their told or bend to the will of a power crazed elite. But will they stick by their new found principles and back the Local Campaign Forum of The Labour Party AND the Conservative Group ?  Now there’s a political dilemma !

A  press release we have just received from the Wirral Local Campaign Forum (formerly known as the Wirral District Labour Party) is the clearest indication yet of the schism between local party members and the old guard of Labour Group . The LCF declares its opposition to the Hoylake Golf Resort – or Celtic Manor Resort as its being rebranded in certain quarters – which has been a flagship development for the ruling administration under the ‘leadership’ of council ‘leader’ Cllr Phil ‘Power Boy Pip’ Davies.

We did predict that 2019 would be an interesting year for politics on Wirral. One week in and things just got a whole lot more interesting… 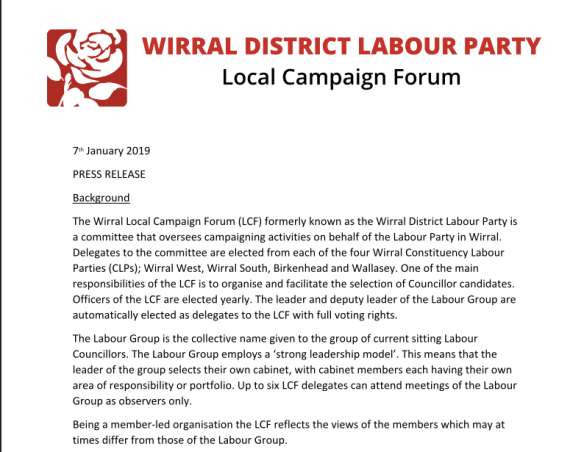 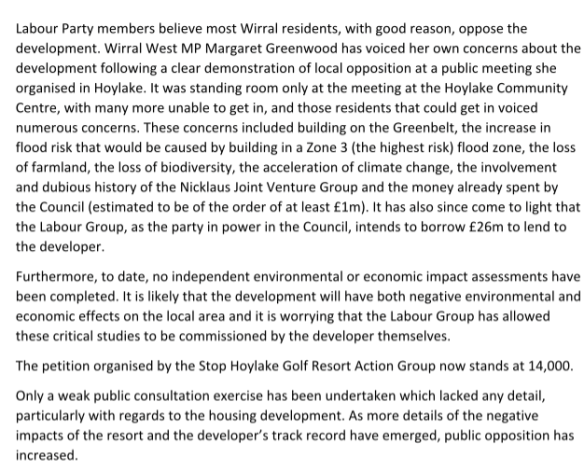 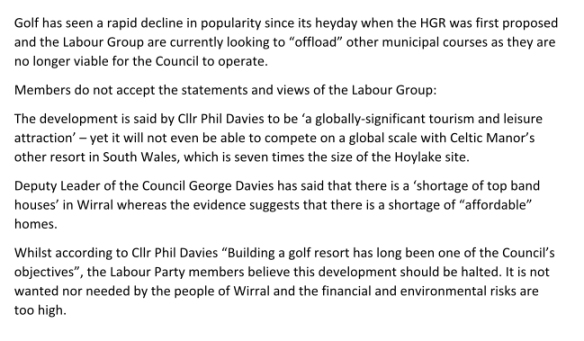