You know it’s the ‘Silly Season’ when the weather breaks just in time for the school summer holidays and the national papers are full of cheap titillation and shaggy dog stories.

However it’s nice to see a story with a Wirral connection reaching the nationals. Let’s face it it makes a change from Frank Field writing for The S*n. This particular story has been picked up by the Daily Mirror from the Liverpool Echo and concerns a swingers club in Birkenhead known as the Townhouse , replete with a sex dungeon ,puppy cages ( no ,us neither – but we can imagine) ,swings , spanking benches and fetter’s wheel (again – a new one on us). Read fully story here : Inside the unassuming swingers club…

Wirral Council must be so pleased that their potential twin town arrangements with American sin city Reno are going well with lap dancing club Peachez defying attempts to close it down and this classy joint , er , springing up.

Owners Vicky and Jim described their clientele to Echo reporter Emilia Bona (!) ,yes you read that right ‘Bona’,- as follows :

There’s no mention of councillors or council officers being clients ,although the Townhouse seems just the place for a certain councillor we know to dance the night away . We wonder what former council officers of ill repute would make of the place ? – but then they preferred their shag-pads to be a bit more upmarket. West Kirby pop ups during the Open and that award winning hotel out in Thornton Hough – and all the better if Wirral Council taxpayers were paying for it!

However it looks like Wirral is finally on the map and in the public consciousness at last  ! But please be warned don’t Google ‘Wirral -spit roast’ expecting to find recommendations for hearty dinners to be had on the pervy peninsula!

Let’s get one thing clear –  no-one’s hands are clean in this long running  debacle even though Sir Slippery may have acted within the law his conduct remains highly questionable. However our issue is mainly with Frankenfield who , as is his wont, is wanting to take the moral high ground in a sleazy tabloid tit-for-tat between the Daily Mirror and Daily Mail.

The  long running feud was re-ignited in recent Daily Mirror front page where they christened the tawdry tycoon as ‘Sir Slippery’ and continued over the weekend in the Mail on Sunday and again in Monday’s Daily Mirror which picked up on the exclusive Mail interview. Mail readers must’ve been torn as S*n columnist Field is unsurprisngly their pet Labour MP! 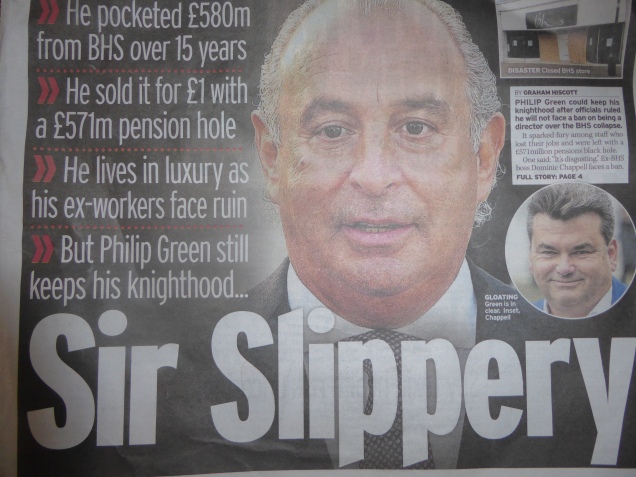 What’s more it all seems very reminiscent of a case closer to home where again the ‘saintly’ Field took issue issue with another man called Green and used the same tactics and with the same result!

So let’s take a look at some selective quotes from the stories and comment on he worrying similarities .

Sir Slippery maintains that St Slimy is a man who has a personal vendetta against him. However based on what we know we are more inclined to believe Green ‘s claim that Frankenfield is  mainly ‘interested in publicity for himself ‘ 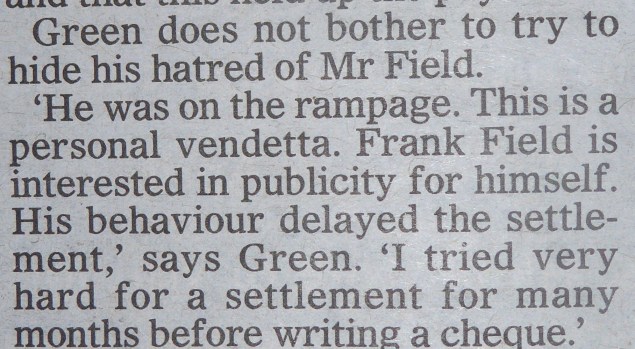 Significantly  ‘Sir’ Philip Green was cleared of any wrongdoing following an investigation by the Insolvency Service  and therefore can continue as a company director and yet Frankenfield continues to pursue and publicly condemn the tycoon. All very similar to his pursuit of former Wirral Council director Dave Green . 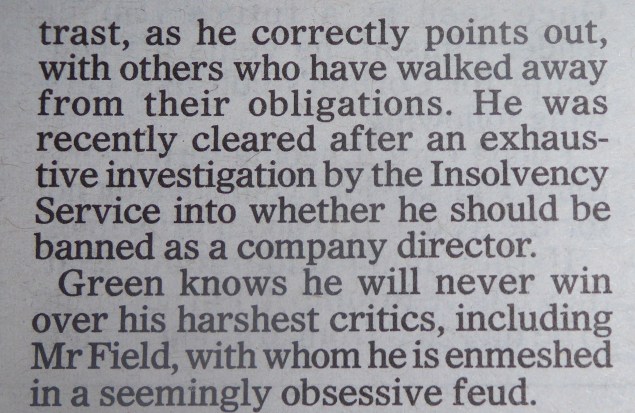 There were inquiries undertaken by the Audit Commission , Wirral Council and investigations instigated by Field undertaken by Serious Fraud Office and Merseyside Police into allegations that EU procurement rules were broken by Dave Green and ‘whistleblowers’ supported by Field suffered detriment as a result of reporting the alleged breach.

This is countered by Sir Slippery’s claim that Field also intimidated/frightened the Pensions Regulator . This must be very familiar to Wirral Council officers at all levels of seniority who have faced the same tactics from the saintly people’s champion. This includes the former Wirral Council CEO Graham Burgess who would not bend to Field’s will when it came to paying off the whistleblowers who he ‘championed’ – mainly because they had the means to incriminate his electoral agent , Cllr George Davies and other political allies , in serious  misconduct . Therefore Burgess had to go – and go he did.

And yet still Field implores PM Theresa May to strip Sir Slippery of his knighthood much in the same way he wanted Dave Green stripped of his livelihood.  As a fully paid up member of ‘the Establishment’  who never fails to use his contacts  and connections to get what he wants and to crush any opposition to his carefully constructed public persona and to counter criticism of his cronies  Field’s statements below are early contenders for ‘Quote of the Year’ . As ever the hypocrisy is simply breathtaking.  And as for asking the question as to whether May is with ‘the big guy or the little guy’ we think that after this week’s events we all know the answer to that question don’t we?

For a change we’ll leave the last word to ‘Sir’ Philip Green rather than ‘St’ Frank. Whilst Green keeps it as classy as his ‘hot-felon’ dating daughter we find it hard to disagree with his description of the current incumbents (of all parties) in the House of Commons .

One of the many curious aspects of this week’s  Jim ‘Crabby’ Crabtree conviction was the quote :  ‘You need to pay back the £19,000 bitch, or I will do what happened to that MP today’ which was addressed to Cllr Louise Reecejones and as we now know referred to the murdered MP, Jo Cox.

Never has the mention of a sum of money so troubled the minds of  Wirral Leaks and its readers since the infamous £48,000 paid to former Wirral Council head of communications, Emma Degg.

Unfortunately as Crabtree pleaded guilty he was spared cross examination and so the finer details of his threat were not heard in court. Subsequently Reecejones has also failed to enlighten us on the significance of the £19,000 in her exclusive interview with the Wirral Globe :

So what are we to make of this £19,000 ? –  an amount plucked out of the air in a drunken tirade or does it refer to matters which have been under-reported ?

We have reason to believe that the crux of this particular matter harks back to a time when both Crabtree and Reecejones were suspended , facing separate allegations and under investigation by the North West Labour Party – but not by the local Labour Party .

Indeed we believe that what unfolded in this highly damaging case to the reputation of the local Labour group is due to a total absence of leadership. Also , witness the fact that despite this shameful case making the national newspapers (Daily Mirror and Daily Mail) that no prominent local Labour politician has issued a word of support for Reecejones or has been prepared to condemn Crabtree for his ‘despicable’ conduct.

However we have reason to understand that the £19,000 Crabtree referred to was not owed to him personally but was rather what he believed was owed, for some reason, to Wirral Council by Cllr Reecejones. Information we have received suggests this money was for the implementation of the special education needs and disability reforms given to Wirral Council by the Department for Education and there have been claims it was allegedly misused.

Although Reecejones was investigated , cleared of any wrongdoing and reinstated  , Crabtree was given a formal warning about his conduct which related to quite separate matters which we have covered extensively on Wirral Leaks. He subsequently failed to be selected as Labour’s ward representative for Bidston & St. James . Could this have been the cause of deep abiding resentment that let led to last June’s cataclysmic phone call ?

Meanwhile we are promised that  : “There are more newsworthy issues to yet come out about LRJ in the not too distant future. “

Perhaps then we will finally find out what the £19K is all about – just as we eventually found out that the £48K that Degg received was a result of allegedly being bullied and harassed by ex – council leader and ex – mayor Cllr Steve ‘Foulkesy’ Foulkes.

Some of the local Labour group are a lovely bunch, aren’t they?.