One of the advantages of the nights drawing in is the opportunity to hunker down under the duvet and review the prolific output of esteemed local videographer John Brace.

What will we do when Wirral Council start filming their own meetings next year and we can no longer view the unedited, unexpurgated and unrehearsed proceedings that ,laughably, are held in the name of local democracy?

Talking of laughing, my how we laughed at Leaky Towers at the sight of the chair of the Business Overview and Scrutiny Committee , Cllr  Michael  ‘Wild-Eyed’ Sullivan, having a pop at fellow Labour councillor Ron Abbey  (and Cllr Jerry Williams) for contemptuously putting his coat on, throwing his agenda in the bin and walking away before this particular meeting had finished.  Of course we know that Cllr Abbey is a graduate of the Cllr Harry Smith Charm School so we expect nothing less from this bellicose bruiser. However it’s a high five from Wirral Leaks to Cllr Sullivan, who Her Ladyship describes as a looking like a ‘ Dapper Psychopath’ , and that’s a compliment by the way. You can view the hilarity here from 6:38 – Sullivan v Abbey spat

On a rather more serious note we’d like to ask Mark ‘ Nodding Dog’ Niblock   (astonishingly) Wirral Council’s Head of Infernal Audit  – do you think it is appropriate to give Robin Baker the thumbs up when it is announced by  Cllr Adrian ‘ Welsh Windbag’ Jones , the chair of the Audit & Risk Management Committee,that the Grant Thornton external audit contract has been renewed for another 5 years  – for ‘services (not) rendered’. Niblock and Baker – a sweetheart contract made in hell. And unfortunately we’re paying for it!

The full googly-eyed horrorshow can be viewed here at 0.50 –  Grant Thornton Thumbs Up 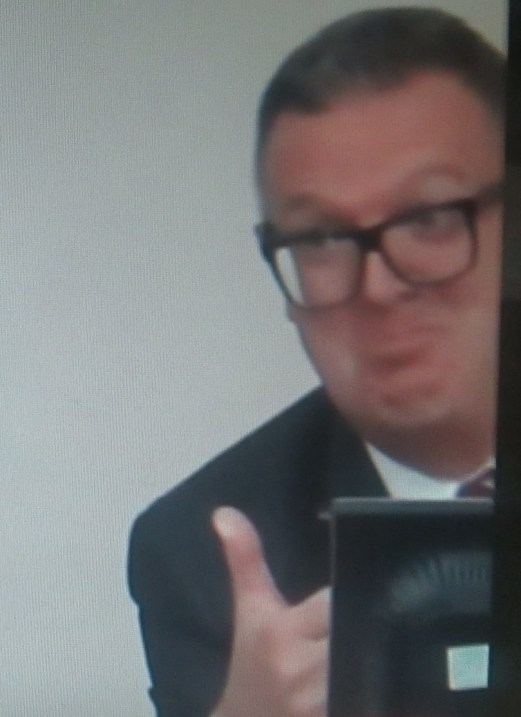 And at this juncture we’d like like to ask Niblock – ‘ It worked out well for you but are you proud of being David Garry’s bitch?’  Just sayin’ !