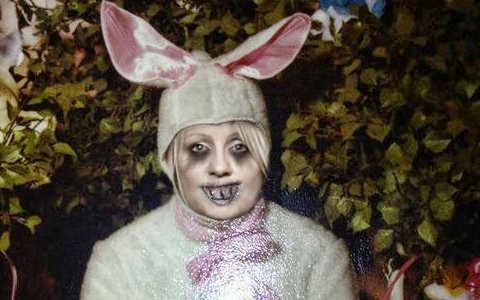 This isn’t just an excuse to pull out one of our old Easter pictures featuring former Wirral West – and current  MP for Tatton- Esther McVey . Although we do have to say it is a particular favourite. No ,dear readers it is to draw your attention as to why you should always, always question the facts behind the headlines (and that includes ours). A story which particularly caught our attention appeared in this week’s Wirral Globe and was titled 98 benefits staff face the axe at Birkenhead jobcentre

The story featured McVey and Birkenhead MP Frank Field who appear to be currently competing for column inches (oo-er missus) .  This bogus story was peak Field/McVey  – not so much ‘Clash of the Titans’ as ‘Clash of the Titheads’ . For a start off 98 Department of Work and Pensions (DWP) staff are NOT facing the ‘axe’ . They are on fixed term contracts which end in ONE YEAR’S TIME.  Their contracts may or may not be renewed depending on demand for DWP services in Birkenhead. As Field and McVey both know such arrangements are what keeps the Civil Service going. It’s like suggesting that MPs who are ousted at the General Election should remain in office because the country is in a mess.

Frankenfield does his usual amateur dramatics  describing the situation as ” gutwrenching”  and cites an unverifiable yet exploitative case of a “female constituent (who) has told him she has been reduced to penury and is living on 7p a day” . Lord knows what that has to do with 98 DWP “facing the axe” other than serving Field’s personal and political agenda.

By the way this is the actual Field/McVey exchange in the House of Commons that prompted the story . Does this look like a ‘clash’ to you?

I ask the Secretary of State not to give an immediate reply to this question but to ponder it. The Secretary of State has told me that the 98 members of jobcentre staff on temporary contracts in Birkenhead are going to be laid off because they have come to the end of their contract period. Unlike Gloucester, we are having real problems with the roll-out of universal credit. I had five cases last week, including one involving a woman who had been reduced to living on 7p. Might not some, if not all, of those staff be redeployed to ensure a smooth transition from traditional benefits to the new one?

Esther McVey The Secretary of State for Work and Pensions

I appreciate the right hon. Gentleman saying that I could speak to and work with him to see what is happening in Birkenhead. What I know is that we on this side of the House brought forward up to 100% advances, so that anyone in need of money could have it. We have also stopped the waiting days, and from April we are providing the two-week housing payment. That is what we on this side of the House have done to protect the most vulnerable, but the Opposition voted against it.

We received this correspondence from one of our readers who is concerned about Merseyside Police and their approach to drug dealing on Wirral :

I have become more than aware of a number of cases over the years of law abiding members of the general public becoming increasingly frustrated at what they perceive to be the total lack of action by the Police when they are informed of
consistent drug dealing from domestic premises.

There appears to be a pattern of Police response in ALL the cases that I am aware of.

Firstly, after several complaints about lack of action by the Police, individuals find themselves having  to complain higher up the ‘food chain’  ((i.e. to the Chief Constable or to their local member of parliament ) Eventually a ‘community’ Police officer gets in touch and explains that they need more detailed ‘intel’ (Intelligence). They will want car registration numbers, times of callers, reports of ‘incidents’ (such the associated shouting outside of the various properties etc)  In all the cases that I am aware of all this information (and much more) is provided. This usually goes on for a number of months.

Then the question from local residents becomes ‘How much information do the Police actually require before they actually do something?’ This is a question no one actually gets an answer to… because nothing actually happens.

No doors are kicked in, open drug dealing continues. Nothing changes. Local residents give up. This is the pattern on the Wirral.

It seems that there is something structurally wrong with the organisation of the local Police for things like this to continue.

I am not anti Police. I know that the ordinary copper has to go out and fight with knobheads everyday. (And that they do this day in and day out. ) But there is something wrong with the set up as it stands,  concerning the response to reports of drug dealing from domestic premises.

So this is my appeal to Merseyside Police, do something, get a grip   –  or you are going to loose all the good will and respect of a lot of very ordinary Wirral people.

We gave a fulsome response to this but we’ll keep it off these pages for now – but suffice to say Wirral Leaks has a view – a dim view of what’s going on with Merseyside Police (or above a certain seniority anyway). However in the interest of balance we are pleased to bring you this report from Merseyside Police :  Investigation launched following discovery of cannabis farm -Townsend St, Birkenhead

Here we discover that Merseyside Police have a ‘Cannabis Dismantling Team’ .  Just think about that for a moment . A  whole team …… dismantling ……. cannabis. It brings a whole new meaning to the term ‘high public office’ ! Shame they don’t have a Corruption Dismantling Team – but then there will never be enough resources for tackling that type of crime would there boys and girls?

We were particularly pleased to be informed about the the formation of the Facebook group Wirral Against the Litter Police. (Kingdom Security)

We made our position clear on the matter of Kingdom Security way back in 2015 when we said :

There’s been much clamour in the local press concerning the overzealous pursuit of alleged litter louts or more accurately those who happen to be easy targets of litter Hitlers issuing Fixed Penalty Notices (FPNs) at the drop of a bookmark.

Now as our readers will know we have a particular aversion to filth and detritus at Leaky Towers which may explain why we report so often on the dirty dealings of Wirral Council. Therefore whilst we realise the days of the Litter Defence Volunteers have long gone we would usually wholeheartedly applaud efforts to keep Wirral tidy. However we also realise that standards in local public life have also fallen into the gutter.So when we read that fines from FPNs issued by Kingdom Security Ltd on behalf of Wirral Council had topped well over a quarter of a million pounds in the first three months of their mutually beneficial arrangement we began to question the motivation behind the cash for trash scheme.

Is this more about swelling Council coffers than about environmental concerns ?.

and finally….. FUN WITH POTHOLES

We’ll leave you with this video of  Wirral pothole fillers . The original video was brought to our attention on Facebook and has since been adapted into a rather marvellous and amusing Youtube video. We don’t know whether the chaps in the video are sub-contractors or will become Wirral Council employees when BAM Nuttall hit the road in October. However in the meantime let’s enjoy their workmanship.