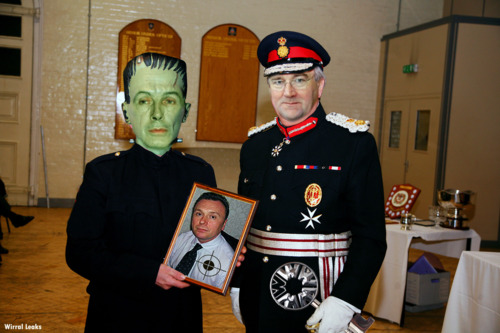 Two Deputy Lieutenants of Merseyside are of one mind.

From time to time we like to check up on the progress on some of the Wirral Council charlatans and chancers that have (dis)graced our pages over the years in our special ‘ Where Are They Now?’ feature.

Whilst we readily acknowledge that we featured former Wirral Council CEO  Steve ‘ Mad Dog’ Maddox in such a post earlier this year we feel the original post needs enhancing mainly because we believe that in many ways it is most instructive on the ways of Wirral.

If ever there was an example of how to evade accountability and manage your reputation then Maddox is the ultimate case study. He saw the writing was on the wall when so called independent investigator Anna Klonowski was brought in by the Tories to find out what whistleblower Martin Morton was blathering on about . On the very day Maddox was due to meet with Klonowski  , Maddox took the coward’s way out and suddenly announced he was going to spend more time with his long suffering family. This followed over two years of Wirral Council senior management covering his expansive arse . Of course Maddox didn’t even need to work his 3 month notice period and swiftly pissed off to the golf course with additional pension payments made up to when he would have retired – about which we can only ask – why?

The panicked leader of Wirral Council at the time Cllr Steve Foulkes provided this farewell quote :

“Steve is essentially a self effacing and modest man who probably has no idea of the very real and extensive legacy he will be leaving behind.We know, and are grateful for it. I wish him all the best for the future and hope that he will continue to be involved with the people of Wirral, for whom he has always been an eloquent and passionate advocate.” Steve 2 Steve

This translates as Maddox did as he was told and his greatest quality is that he could go on and on and on and on and on and on and on and on and on .  But oh what a legacy he left behind!  Whilst Maddox secured himself a tidy six figure bung , collected the Freedom of the Borough of Wirral to add to his OBE and was made a Deputy Lieutenant of Merseyside to stand alongside Birkenhead MP Frank Field, his swift departure meant his hapless and hopeless sidekick Jim ‘Wee Willie’ Wilkie was to reap the wild wind of what his former boss had created – a toxic,corrosive culture of bullying,incompetence and deceit which was soon to be (partly) revealed in the Independent Review in  January 2012 . Needless to say shortly after Wilkie ended up being escorted from Wallasey Town Hall premises a broken man.

What’s more when the furore over the Independent Review had died down Maddox reappeared on the local scene and within the year was appointed as a Director of  mental health organisation Wirral Mind in December 2012 .

This appointment has always intrigued us ,  primarily because it is with some irony that Wirral Mind were seemingly gifted the management of the learning disability service that was a significant feature of Morton whistleblowing case that led to the Independent Review that in turn was the impetus for  Maddox’s ‘retirement’ !

It has long been thought that Wirral Mind, with no significant track record of supporting people with learning disabilities, were rewarded  the contract for keeping a lid on the unlawful charging scandal when they were appointed as advocates on behalf of those who couldn’t speak up for themselves when the scandal blew up . Unfortunately this ‘advocacy’ service didn’t actually extend to advocating on behalf of those who had been financially abused.  An appalled Wirral Leaks reader once recalled attending a  Wirral Council meeting  where Sandra Gilbert Wirral Mind CEO , said that the tenants who had been financially abused ‘lived in the lap of luxury’ . Perhaps if  we put aside the issue of illegality and equality Ms Gilbert might appreciate that if she had £100 + a WEEK taken out of her salary over a number of years she might have fought a bit harder on behalf of disabled people instead of leaving it to Morton and others.

” a need for the Council to refresh its contractual arrangements with (Wirral Mind) in the context of EU procurement requirements.”

Funny how Frank Field wasn’t jumping up and down about this proven case of Wirral Council flouting EU procurement regulations isn’t it ? Or getting Merseyside Police and the Serious Fraud Office involved as he did with the Highways contract complainants that apparently he is still ‘gallantly’ supporting 9 years after their alleged whistleblowing exploits !

Since our report we note that in August 2017 there was a  cessation of Maddox  being ‘a person with significant control’ of Wirral Mind  August 2017.   However he still remains a Director – presumably because of the lustre and prestige that someone with his impeccable track record brings to an organisation.