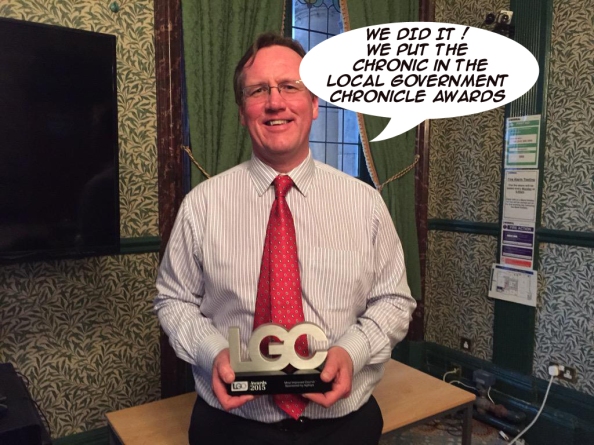 It was three years ago that Wirral Council was named  ‘Most Improved Council’ at the Local Government Chronicle (LGC) awards and anyone receiving an email or a letter from Wirral Council will see they are still desperately trading on this tired and bogus accolade.

As you know we are deeply suspicious of awards and titles as they often serve to provide a veneer of credence to the least deserving. This is something we deconstructed when the LGC award was first announced. Read here : The Bamboozlers

Might we suggest that it would have been more appropriate – or at least in the interest of balance – to include ‘Rated Inadequate by Ofsted 2016′ on official Wirral Council correspondence. After all what would be more indicative of the true state of Wirral Council – a rigorous full inspection of Children’s Services by a team of qualified and experienced inspectors or a 20 minute presentation to a group of gullible local government gurus at Grosvenor House  ,London ? The LGC  judge’s comments from 2015 read :

This is a council that has broken the mould of old ways of working to deliver a dramatic improve to its governance. Under a sector-led approach it has gone from being an abnormal authority known locally as the ‘insular peninsula’ to an organisation that seeks help and inspiration from others and is working with residents in a way they have never done before with impressive results in terms of new jobs.

And yet one year later Wirral council gets slated by Ofsted. But then a LGC award is a notorious kiss of death. It’s just a shame we didn’t get to hear the full story about how Wirral Council got this dubious award . Maybe Jo Miller the CEO of Doncaster Metropolitan Borough Council -who were ‘Highly Commended’ by the LGC judges -will one day tell us about the backstage wheeler dealing that went on to ensure Wirral Council won the award. Apparently the judges thought “they’d had a hard time” . So it was the sympathy vote that won it. Bless. No wonder Cllr Phil ‘Power Boy Pip’ Davies looks so proud in the picture above. Read more here: Most Improved Council 2015

Is it any wonder that the ‘Most Improved Council’ award has subsequently become so discredited that as far as we understand there hasn’t been such an award since? This includes this year’s shit-glittering ceremony  which is to be held tonight : LGC Awards 2018

Sally Clark has recently been promoted to assistant head of communications but joined Wirral when it was undergoing major internal redesign. Her role was to help the council engage with employees to help communicate the challenges, the necessary redundancies and reshaping of services. She very quickly embedded herself across the organisation and her work on shaping how those messages were delivered had a huge impact on the final outcome and how the council was perceived. Ms Clark has been key to driving and maintaining pace in changing the way the council engages with staff, and has helped to set up new organisations that enabled Wirral to become a commissioning council.

We’ve got to admit that trying to improve how Wirral Council is perceived is a tough gig and it will be interesting to see whether Ms Clark fares better than last year’s Wirral Council  ‘Rising Star’ nominee, Strategy Manager Lucy Barrow , who we understand is now ‘all things culture’ . We also understand from a source that reclusive Wirral Council CEO  Eric ‘Feeble’ Robinson has a ‘special liking’ for Ms Barrow and “can’t stop singing her praises” . But then according to last year’s LGC award pitch “People at every level of the organisation rely on her advice,support and talent” . As no doubt does her husband Mark Barrow – who just so happens to be ‘Campaign Manager’ at Wirral Chamber of Commerce’ ! Proving once again to us that if you impress the right people and have the right connections on the insular peninsula you’ll go far. Is Wirral ‘s talent pool really that shallow? Sadly the answer appears to be yes! Read more here :  Rising Star- Lucy Barrow

Now we can’t comment on the merits and attributes of these ‘Rising Stars’  but we do think it is revealing about what kind of roles are valued and relied upon by Wirral Council  – salespeople and spin doctors.

However such is the mysterious workings of the universe it would appear that it is a truism that for every rising star there is a falling star. And apparently disappearing into a black hole is former Wirral Council Super Duper Director Kevin ‘Addled’ Adderley who having being exiled by Wirral Chamber of Commerce to Egerton House as a glorified facilities manager, has we now understand, gone altogether . Perhaps he didn’t fit with the slick ,glossy image that the aspirational Chamber are promoting. As Her Ladyship said : ” I fear that burgundy cummerbund at the LGC Awards 2015 may have been the beginning of the end for him”

If this is the case it’s lucky for Adderley that the £250,000 pay off he received from Wirral Council in 2015 will mean that (unlike others) he won’t have to darken the door of the DWP for whom he worked for 29 years. Perhaps he can give former Wirral CEO Graham Burgess a call to see if there are any jobs going within his burgeoning property empire (Torus /Bamboo Lettings etc;) …….on second thoughts, perhaps not.

But as the stars are going out

And this stage is full of nothing

And the friends have all but gone

For my life, my God, I’m singing 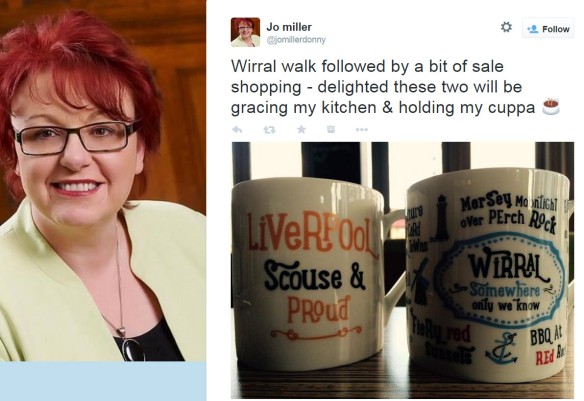 So what exactly has Doncaster Council Chief Executive Jo Miller been doing on the wilder shores of Wirral? On a fishing expedition following news of the imminent departure of outgoing failure Comrade Burgesski? Or borrowing a few more bob for Doncaster Council from the Wirral kitty?

She certainly has all the right credentials for the Wirral Council Chief Executive post – female ( we all know why that is) , links to SOLACE and the Local Government Association and has had former appointments on Merseyside so will no doubt have all the “right” connections.

Therefore we can only wonder whether her Wirral mug is soon to become her poisoned chalice ! ?…….