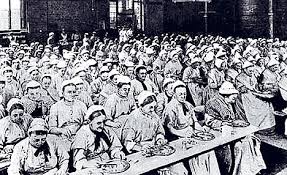 “Your call is important to us , but not as important as putting food on the table…..”

Following on from our posts earlier this week – which we understand has ruffled the feathers of those who are usually more concerned with feathering their own nest – we’ve been contacted by people with inside knowledge of exactly what happens when you give a multi-millionaire a million pounds of public money.

But first of all we need to declare a deep, abiding prejudice. As we’ve said before we think call centres are ‘the satanic mills of the 21st century’.

And indeed the Indeed website provides us with a fascinating insight into what it must be like to work in such a place :

Among the reviews from former employees we note the use of the term ‘workhouse’ . And again this is a term used by one of the commentators on one of our previous posts:

Speaking as one of many local little people, who is employed Mr Asif he runs two modern day work houses were approx 75% are employed by outside agencies , it is a work house where, fear of dismissal is ever present, a living wage is non existent, plus huge staff turnover, and low morale, he is a modern day pirate……..a very morally corrupt business model

So have local prominent politicians had that difficult conversation with The Contact Company owner Asif ‘Massive’* Hamid yet ? ( * the ‘Massive’ tag  refers to his ever expanding business empire obvs).

You know that difficult conversation about ‘championing’ the living wage?

No, thought not!. They clearly think that the serfs who keep them in power should be grateful for any level entry employment going no matter how demeaning/demoralising/disempowering.

However we at Leaky Towers like to look at the bigger picture and comment on the fact that all studies of mental health wellbeing always indicate security as the defining factor – be it security in relationships, security in employment and the ultimate security of having a roof over your head.

But how better to keep people in subservience  by being in constant threat of being unemployed and at risk of attending one of Frankenfield’s foodbanks ( do you see how this sh*t works yet?) . The Contact Company appear to do it by hiring staff via an agency ,presumably as a means to undermine employment rights. Wirral Council do something similar but pay lip service to the Employment Rights Act 1996 and instead subjugate their staff by subjecting them to the constant threat of redundancy. Forget zero hours contracts – this unspoken practice is the greatest threat to workers in the modern workplace and which has sent us hurtling back to the nineteenth century.

P.S. Oh and by the way  what’s this posted on our Facebook page about (we presume) Hamid buying water from Home Bargains for 24p a bottle and selling them for £1?. Surely that’s an urban myth?.