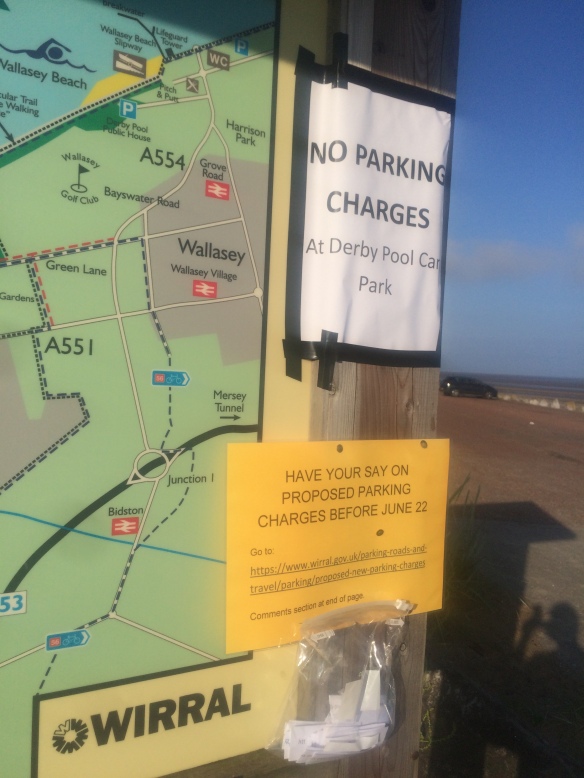 HAVE YOUR SAY ON PROPOSED PARKING CHARGES BEFORE JUNE 22

Derby Pool car park users have their say now its up to the rest of you to let Wirral Council know that drivers aren’t cash cows to fund fat cats.

ARTIST’S IMPRESSION OF THE WEEK

Here’s the latest artist’s impression for Wirral Waters (are they still calling it that?)

As well as creating a hub for marine ‘entrepreneurship, enterprise, skills and culture’, the complex will revamp the 1860s central hydraulic tower and engine house designed by Jesse Hartley as a copy of the Palazzo Vecchio in Florence. The Grade II-listed building was bombed during the Second World War and has remained largely derelict ever since.

It wouldn’t surprise us that the next thing you know Wirral Council leader  Cllr Phil ‘Power Boy Pip’ Davies and the usual crew from the Wirral Chamber of Commerce will be jetting off to Italy to twin Birkenhead with Florence!

However it seems to us that Wirral Waters continues to progress with its opportunistic, ad hoc  developments. A dementia care village here, a marine complex there etc; etc ; – backed by a never ending portfolio of artist’s impressions . All very eyecatching – but not as eyecatching as the big red bridge in Tower Road that is still resolutely refusing to be put back in its place.

Might we suggest that Labour Party members approach Wirral Councillors who sit on Magenta Living’s Board and particularly their Labour representatives Cllr Steve ‘Foulkesy’ Foulkes and Cllr Stuart ‘Witless’ Whittingham (or even Tory councillor  Jeff Green – after all he is Foulkesy’s ‘kindred’). Or perhaps not……

AND FINALLY ……THE GIFT THAT KEEPS ON GIVING

Details of  latest Wirral councillors ‘Gifts and Hospitality’ register has been published . Needless to say we were particularly drawn to Council leader  Power Boy Pip’s entries. which are as follows :

Birkenhead and Tranmere leader of the council Cllr Phil Davies

November 28, 2017: Meal and concert ticket at the Echo Arena, Liverpool offered by The Contact Company.

As our eyewitness source told us last November the latter was not just a meal and concert ticket- Pip  was in a private box….

We thought at the time that Pip could have been enjoying the hospitality of the Liverpool Echo itself  but it now transpires that he was the beneficiary of Asif Hamid’s largesse (!) via The Contact Company . As far as we’re concerned this is considerably worse in terms of conflict of interest , especially when you consider that Hamid is the Chair of Wirral Chamber of Commerce who have been the beneficiaries of Wirral Council generosity when it comes to giving the Chamber  grace and favour properties – sometimes at peppercorn rent. We would’ve thought that it would have been prudent of Pip to think twice before accepting such a gift.

But then we suppose this is nothing new for Pip. After all he is used to dancing to an old Queen’s tune isn’t he?……. 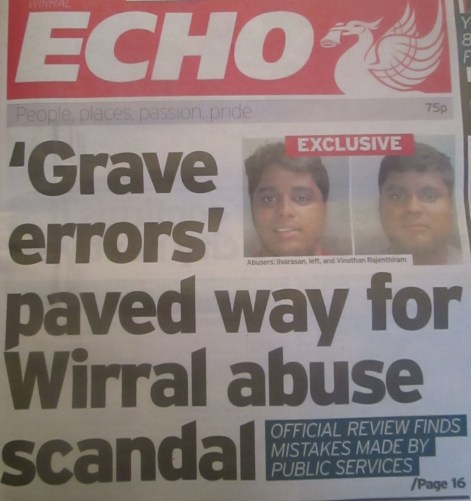 We understand that Wirral Council have just agreed a 3-year £750K contract with Trinity Mirror (publisher of the Liverpool Echo) to print their appalling rag Wirral View. This new arrangement  is due to start on December 1st so we just hope that council leader Cllr Phil ‘Power Boy Pip’ Davies , seen bopping away in a PRIVATE box in the Liverpool Echo Arena at last night’s Queen & Adam Lambert concert, paid for the dubious privilege or at least made an appropriate conflict of interest declaration. Just sayin’

However the arrangement seems to be bearing strange fruit for the Liverpool Echo as they publish an EXCLUSIVE! , presumably courtesy of Wirral Council ,on the repulsive Rajenthiram brothers Child Sexual Exploitation (CSE) case.

As we’ve already reported the Serious Case Review (SCR) report has not , and currently will not, be published . Instead  Liverpool Echo have today published a front page  EXCLUSIVE! under the headline ‘ Grave Errors ‘ paved way for Wirral abuse scandal ‘. Inside on page 16 there are details of the 24 ( count’em) recommendations of the SCR.  Crime Reporter Joe Thomas chips in with the sub-heading ” Too many missed opportunities. The public should be told”  and bigs up the Echo’s role in revealing ‘concerns’. However after the bigging up comes the inevitable copping out as Joe says :

“The safeguarding situation on Wirral is said to be much different now ….”

Yeah , whatever! Hey! Joe they said that in 2012 after the publication of a damning Independent Review about adult social services. They lie. It’s what these people do. Might we suggest you at  least check out the veracity of their claims before publishing.

Meanwhile we still think that the problem with Wirral Council is its culture and which is revealed in the 24th and last recommendation of the SCR  which reads :

Or in layperson’s terms – try and employ people who actually give a shit about their job and more importantly vulnerable people. Simple as that.

However isn’t it reassuring to know that the day before Wirral Council was humiliatingly yet again being called out for being crap all over the local TV and press that its ‘leader’ saw fit to play air guitar and headbang along to ‘Bohemian Rhapsody’ ?