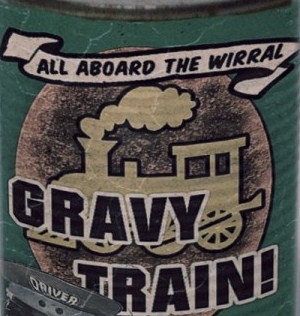 A round of applause for old Wirral Leaks favourites Anna Klonowski and Bill Norman as they make yet another guest appearance on our hallowed website.

You have to to hand it to Anna and Bill – never have such transparent blaggers made such a good living off the public purse. Needless to say their paths eventually crossed at Wirral Council –  the ground zero of local government corruption.

Having failed miserably to make a blind bit of difference to the culture of Wirral Council, whilst at the same time significantly enhancing their bank balances, we hold these particular fraudsters in complete contempt.

So what happened subsequently to these shysters? – that’s right they got found out.

Firstly – let’s deal with Anna and we reluctantly have to agree with a belligerent local Tory councillor on this one :

We noted at the time his deliberate typo ( ha! ha!ha!) but in the intervening 5 years this repugnant bulldog has just sniped from the sidelines and made NO DIFFERENCE WHATSOEVER. Neither did Klonowski. She was too busy cashing her £250K cheque and then smugly sitting on the ‘Improvement Board’ and feeding off the blood, sweat and tears of whistleblowers like the local government parasite she is (put that on your LINKED IN profile why dontcha).

We need to thank the magnificent blog The Bristolian for keeping us up to date with Anna’s travels (or should that be be travails ? – either way she doesn’t care as long as she’s getting paid for it).

It seems that Anna picked up a few tips whilst working for the Wirral Council power elite – like paying off people to keep their mouths shut. As you can read here : Klonowski Gag

And not only that she picked up a few bullying tips from Foulkesy , who she strangely supported. Not strangely at all in retrospect – he paid her humongous bills. You can read all about her shameful progress here : Big Wedge’s Bully Shame

What we do admire is The Bristolian’s challenge to this gravy train gobshite and their rider :

NB. Any legal threats in relation to this article to the Bristolian’s email please.

Because as we know Anna is not averse to threatening people with legal action who dare to challenge her. As we’ve reported previously she set Martyn Scott from DLA Piper onto Wirral Council whistleblower Martin Morton, who let’s not forget made her a cool quarter of a million, because her dared question her as to why she didn’t do her job properly and fully expose , among other things , that Wirral Council and Merseyside Police were mixed up with drugs money launderers.

But let’s move on to Billyboy Norman .

And can we say we’re simply astonished that this piece of work has lasted as long as he has . What an inspiration to one and all – that no matter how corrupt,how incompetent, how damn ugly you are you can still trawl the country picking up cheques from people who are more corrupt, more incompetent and more ugly than you are.

Anna Klonowski is no doubt taking notes and ready for her comeback.

NB. Any legal threats in relation to this article to Wirral Leaks email please. 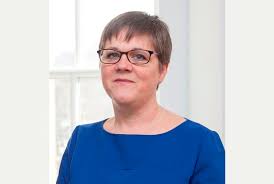 We return to one of our occasional series. This particular one brings you news of the great and the good who have graced our blog with their presence. Sadly for us that has not hindered their progress towards high office and more importantly for them, the bank.

This blog post features the relentless progress of consultant Anna Klonowski . As we mentioned last month it is 5 years since the Independent Review of Allegations Made by Martin Morton & Others report landed with a bang in a blaze of bad publicity for Wirral Council and ended in November 2013 with a whimper that was the damp squib of a final meeting of the so-called ‘Improvement Board’ which purportedly was set up to address Wirral Council’s failings identified in the report.

We now hear that Ms Klonowski has been appointed as the new Chief Executive of Bristol City Council on £160K a pop.

As we know Klonowski started her investigations at Wirral Council in August 2010 and when scheduled to meet the then Chief Executive Steve Maddox he promptly announced he was retiring to spend more time with his long suffering golf clubs. Three years on and with cowardly circularity Cllr Phil ‘Power Boy Pip’ Davies similarly made a swift exit at the aforementioned Improvement Board when whistleblower Martin Morton stood up to speak .

Although it must be said Davies had every reason to have the squirts. Morton tells us he regrets not specifically mentioning that the misconduct of Labour councillors Steve Foulkes and George Davies was one of the main reasons why he could not return to work for Wirral Council as it might have saved him 3 years of stonewalling and cover up. Sorry Mart, but we have to disagree with you on this one – stonewalling and cover up is like breathing to these people.

We understand that during her ‘investigation’ Klonowski bemoaned the fact to Morton that local authority investigative work was drying up. We suggest that this might explain why the investigation took so long. Despite the fact that Klonowski was on the case from August 2010 to  January 2012 and handbagged a £250,000 pay cheque and cost Wirral Council another £150,000+ as a result of legal advice and putting up Anna in her own Aparthotel in Liverpool , she summarily failed to complete what she was commissioned to do, and that was to FULLY investigate the whistleblowing allegations brought to her attention.

With a background in CIPFA ( Chartered Institute of Public Finance) it was clear that Klonowski was way out of her depth when it came to tackling the more problematic social care issues that Morton ( & unnamed and redacted others told her about ).

Klonowski was much more at home discussing corporate governance issues which led to the ‘Refresh & Renew’ report which was published in October 2011 . It’s just such a shame that this was not her brief. She returned to the CIPFA comfort zone in the Independent Review report itself were there are pages and pages and pages of endless, tedious observations about Wirral Council’s Internal Audit.

This led to some shameful omissions on Klonowski’s part. Morton tells us his most significant whistleblow concerned the death of a vulnerable young man who died whilst the staff who should have been giving him his medication were allegedly at the bingo.This received a couple of lines in her report!

The staff involved worked for an organisation by the name of Assisted Living Services (ALS). This organisation had links to drugs money laundering and yet were owned by former Merseyside Police CID officers. Strange bedfellows – or perhaps not! It was left to a subsequent investigation to identify these connections so we can only presume Klonowski either couldn’t be arsed or was warned off by ‘interested parties’.

As you can read no serious case review was undertaken into the death – instead Wirral Council saw fit to persecute Morton and respond to false allegations that he was in cahoots with disgruntled staff to bring down ALS. An investigation into the allegations against Morton led the investigator to declare them as ‘a crock of shit’.

Surprisingly (or unsurprisingly) considering her background in finance Klonowski also failed to address further issues of financial mismanagement involving disabled people – claiming she’d run out of time and that despite all evidence to the contrary that Wirral Council could be trusted to sort it out and left them to it ! Needless to say they never did .This is a matter we have previewed but have not got round to publishing. However whilst it is complicated story it is a cautionary tale of how a cover up is coordinated (and supported by other agencies) and something we will get back to at a later date.

Instead Klonowski sought the advice of largest legal firm in the world (DLA Piper)-like you do when someone else is footing the bill!- to come up with a convoluted and frankly ludicrous attempt to deny disabled people a full reimbursement of monies that was unlawfully taken from them on the grounds that to charge disability benefits from disabled people and not from non-disabled people was somehow not disability discrimination ! Even the shameless Wirral Council weren’t prepared to sustain this unsustainable argument and conceded that £736,000 should be repaid , despite DLA Piper giving them a get out.

Is it us? – or it is entirely perplexing that someone so seemingly intent on maximising their own fees wants to minimise the repayment of unlawful charges to disabled people – or are they in any way related? I think we should be told!

You won’t be surprised to hear that Morton wanted to raise these omissions with La Klonowski herself. After an unanswered telephone call and one email Special K set the hounds of law on him . Yes! , you guessed it – DLA Piper! 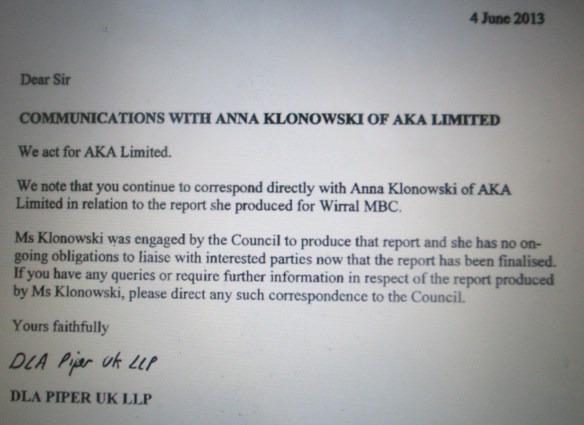 Isn’t it funny that Klonowski had ‘no on-going obligations to liaise with interested parties’ and yet sat on Wirral Council’s Improvement Board during this time (reputedly for £1,000 a day) . Again we can only presume that ‘interested parties’ is defined by their ability to pay.

Even more damning we understand that she was quite happy to discuss her concerns about Wirral Council with opportunistic ‘complainant’ Gary Downey . Downey alleges that Klonowski disclosed to him during the first Wirral  Council vote of no confidence vote in the then current leader Steve Foulkes ( aka Foulkesy ) that she hoped he didn’t lose as she had no trust and confidence that Wirral Council Tory leader Jeff Green would do anything about Wirral Council’s toxic culture. Whilst she may have called that one correct it also means that she subscribes to the Martin Liptrot school of political neutrality. Either that or she was taken in by Foulkesy’s cheeky chappy persona and his ‘bible-like’ devotion to her recommendations for cash-money purposes.

Nevertheless in conclusion it would seem that it all worked out well for Klonowski in the end. For unemployed Morton and the long suffering council tax payers of Wirral – not so much !