As Mayor Foulkesy nears the end of his mayoral reign the tributes begin to pour in.  Readers are invited to enter our caption competition and win a stay at at award winning top notch Wirral love nest Mere Brook House. 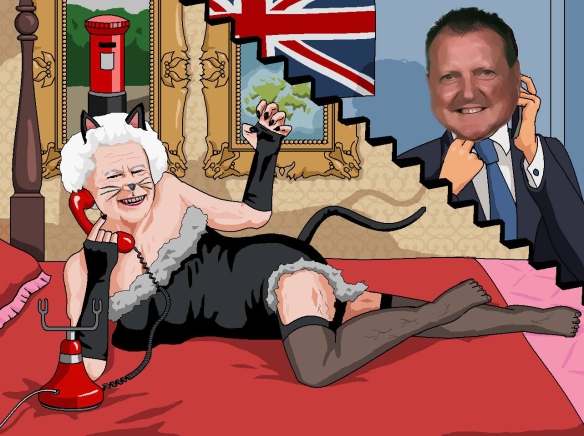 Imagine our delight at Leaky Towers when we discovered that last week’s Wirral News had not one,not two,not three but FOUR photos of Mayor Foulkesy .
This included the portrait attached to his yawn-inducing weekly column ,where for some strange reason , the Mayor’s Ball at Thornton Hall Hotel barely warranted a mention.
Can’t think why can you ?!……..

However we have to say that another highlight of the mayoral year has sadly not been reported locally.

This particular auspicious event was the Mayor and Mayoress’s attendance at a Royal Garden  Party at Buckingham Palace in June just after Foulkesy’s triumphant inauguration. 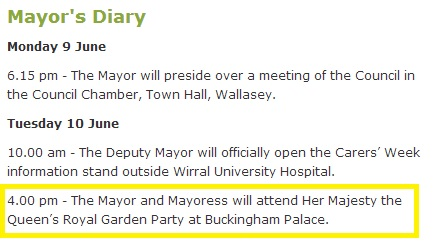 Of course we don’t expect Foulksey to have the insight to question the savage irony of attending a Royal Garden Party and posting pictures on social networks of exclusive dining at Roux Parliament Square  whilst at the same time championing foodbanks for the poor back on Wirral ……. well certainly not when there’s fawning and forelock tugging to be done and a day out in that there London impressing his fiancee.

Up until now we have been left to wonder as to what went on in the grounds of Buck House on that fateful day until our royal correspondent Si Coffant belatedly posted this eyewitness report:

Mayor Foulkesy and Mayoress,the Lovely Elaine were at the finger buffet when Foulksey dug his consort in the ribs and whispered: ” Hey Lainey isn’t that the one off the stamps and the coins and the telly on Christmas Day?…”

(The Lovely Elaine was preoccupied with a gobful of vol-au-vent but managed to nod in confirmation.) Foulkesy with his plate overloaded with fancy canapes bounded over the palace lawn,neatly dodging the corgis whilst rapidly being pursued by his consort:

Foulkesy : Hey! how ya diddlin’ Queen?.I’ve always wanted to say that ‘cos it’s funny as you is de actual Queen? Gerritt?!

Foulkesy : Deffo – our Council Leader Pip Lad says I’m an inspiration as I rose from humble origins to be Mayor and first citizen of Wirral.

Her Majesty : Wirral? Do tell me- where is that exactly ? Is it part of the Commonwealth?

Her Majesty : So I see ….and yes  I seem to have a faint recollection of Prince Philip and I receiving an apology from a Wirral Councillor by the name of  let me see (rummages in handbag for letter )  Ah yes ,here it is … a Councillor by the name of  Janette Willliamson who I understand made a rather vulgar and disrespectful  remark about my dear husband  ….. her apology reads as follows:  “I would like to make a full and unreserved apology for my comments on Twitter.I appreciate the tone and content of the messages was completely inappropriate and would like to say sorry for any offence caused.I feel I have let myself and the Labour Party down and promise to learn from my mistake….”

Foulkesy: She was only jokin’ ya , your Maj –  it’s just our cheeky northern humour …(rapidly changing subject)  …..Anyway can I introduce you to me judy,only she’s not called Judy it’s da lovely Elaine

Her Majesty: Charmed I’m sure….and how did you meet?

Her Majesty : No I have a man that makes all the necessary arrangements

Her Majesty : How delightful that’s the same name as my new great -grandson.

Foulkesy : Yeah and the similarities don’t end there Queen – our George is equally privileged, protected and always in da papers too.

The Lovely Elaine: Love your frock… is it from Marksy’s?

Her Majesty : (coughs)…It’s been a pleasure.However one must move on to meet one’s other guests (whispers to Lady In Waiting) …..call security.

And on a final note can we add  that this weeks Mayor’s Diary throws up another cruel irony :

As Her Ladyship said whilst shaking her head in despair : ” Dearie me it’s like getting Harold Shipman to head up Age Concern….” 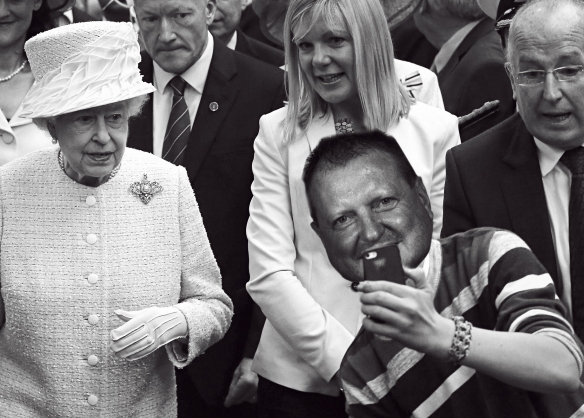 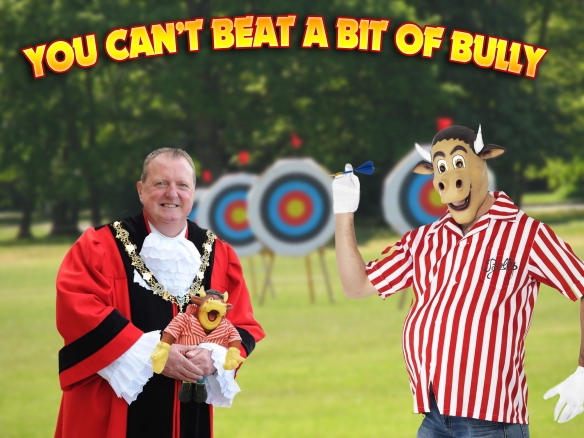 To be, or not to be, that is the question—
Whether ’tis Nobler in the mind to suffer
The slings and arrows of outrageous fortune,
Or to take arms against a sea of troubles….

We’ve said it before and we”ll say it again but our local politicos love dishing it out but they don’t like it up ’em. We’ve already reported Power Boy Pip’s wimpering about the fact that not all of the assembled throng at this week’s mayor-making ceremony prostrated themselves in adoration of Mayor Foulkesy. Pip’s reasoning that it was really,really bad form to upset the rellies and besties who were in attendance, especially consideringn Foulkesy has always been such a stickler for good manners and decorum!…….

Following this feigned outrage we then had ex-Councillor and bad loser Bri “Nylon” Kenny writing to the Globe complaining that the publishing of a “critical” letter by Lib Dem Councillor Stuart Kelly the day before the recent local elections was “political” and thereby inferring this influenced the outcome of the vote in the Birkenhead/Tranmere ward which Bri memorably lost.  SEE HERE

Don’t worry Bri  we’re sure they’ll find a safe seat for you next time round:

” Meanwhile he’s on the subs bench” chortled Verity
”  Does “subs” stand for substandard ” chipped in Her Ladyship
” Well it stands for something which is more than can be said of some of our Councillors!…” I retorted  –  Oh what larks we have at Leaky Towers!

No doubt it will be only be a matter of time before we hear Foulksey claim he’s being picked on by “disgraceful” blogs again (yawn!)

Oh , but in all good conscience he can’t can he?….. seeing as someone from the Council once complained about something similar,was supposedly ignored and the only way they could possibly be consoled was with a nice fat cheque. (No, we don’t know how that works either!…..)

So all we can say is, sorry Foulkesy, but if you put yourself in the position of mayor you automatically raise your profile and become an unmissable big red target for satire and all the “slings and arrows” that entails. As far as we’re concerned at Leaky Towers it’s “open season” and we’re not talking about the golf!

However on a more positive note we’d like to thank Councillor George Davies for having a little prick in the name of Diabetes Awareness.

What next on the health promotion front for Cllr Davies?
A “Smear (Campaign) Test” ? But will a positive reading lead to a negative outcome?
Health warning to Cllr.Davies : If you want to pass this test steer clear of “sweeteners”…..