As you have no doubt heard the government has updated the national and local population and household projections for the next 25 years (ONS website September 21st 2018). In the case of Wirral both the population growth and the household numbers growth have halved based on 2016 data. However you apply the numbers (for example by referencing back to your Litchfield Consultants report of 2016) the result is effectively the same. Instead of 12,000 houses over the fifteen year plan only ~5,900 are needed. Any attempts to ‘uplift’ this number based on now mythical economic growth scenarios, or affordability factors, or the later release of ‘pent up’ demand in certain age groups, will not be credible in the light of recent government economic forecasts. Indeed the credibility of the government housing needs methodology will now come under close scrutiny. I should also tell you that the latest population forecast growth to 2033 relies entirely on a large net migration into Wirral which your own consultants questioned in 2016. I expect the newly released numbers to be further challenged and actual Wirral future housing needs forecasts will be lower still (~4,400 based on current trends).
The housing implications are obvious. Some weeks ago I submitted an analysis to the public consultation which was also widely published. I enclose a copy. It works through several housing scenarios using brown field, Peel offers and empty house recovery assumptions for the 12,000 houses target and for that target simply scaled down by the changed population forecast (i.e. 7,100 houses). You can see that very little of your 4,900 acres proposed GB parcel release plan would be required. This land could support 71,000 houses. With the new government household growth forecasts the 15 year plan period housing needs drop to ~5,900. The effects of this are shown in the second document enclosed. Under most scenarios NO green belt land needs be used at all to meet housing needs. At most it would be a few percent of your 4,900 acre GB parcel release plan. The ‘plan’ is totally spurious and unjustified by the ‘official’ data.
In these circumstances I suggest the public consultation should be halted until the council makes the new housing need numbers clear to all Wirral residents and compares them honestly with your GB release plan proposals which in principle could accommodate 71,000 houses. It is not good enough for David Ball to tell public consultation meetings that the numbers will be looked at in camera, by a council appointed ‘expert’, ‘some time’ in the future. Alternatively the GB release plan could be withdrawn now before formal challenges to it emerge.

We proudly present a message from ‘The Prof’ along with his measured analysis of the newly released data from the Office of National Statistics (ONS) and the significant impact it should have the Green Belt debate. Spoiler alert : NO GREEN BELT IS NEEDED TO MEET HOUSING DEMAND!

Gents….the new ONS population / household growth forecasts for Wirral have just halved. (Still too high though). This means that Green Belt land requirements should be slashed even further than I suggested a few weeks ago. With a bit of the brown field already identified and a bit of Wirral Waters and a bit of refurbished empty housing NO Green Belt land release is needed.

The  council should objectively inform the public of the new numbers, halt the consultation and scrap their crazy 4,900 acre Green Belt release plan immediately. If they don’t we should ask why not? 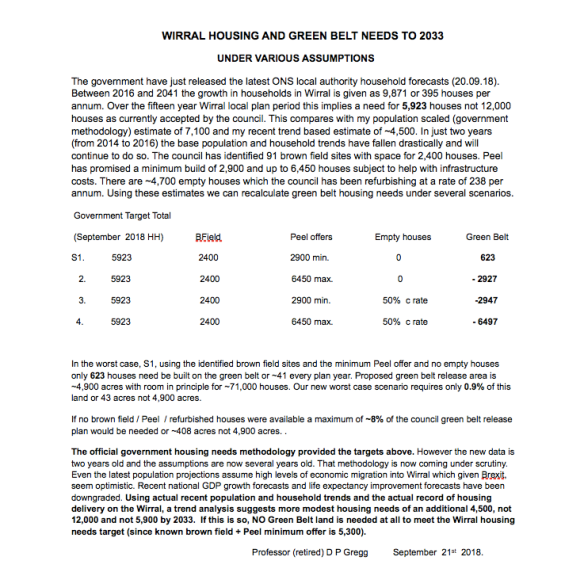 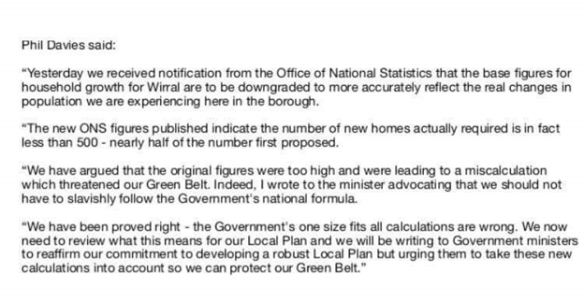 The above leaked internal Labour document shows the dissembling and deception over Wirral’s Green Belt that is going on behind the scenes at embattled local Labour HQ.

Prepare for the local press to print ,without question or edit, a news release blaming the Government for threatened assaults on the Green Belt and citing ‘miscalculations’ in statistics and how Wirral Council have been ‘proved right’. Nothing to do with the fact that Wirral Council hasn’t had a Local Plan for 14 years or that the ruling Labour administration have been playing  fast and loose with facts and figures to suit their political agenda or that they’ve been using the local press to try and make out that they are the saviours of the Green Belt when all the evidence points to the fact that they won’t be happy until Wirral is one big concrete jungle with a golf resort.

However it is the contempt with which the ruling Labour administration at Wirral Council (or what’s left of it anyway) treat the people of Wirral that particularly galls us. Fortunately there is a growing number of  well-informed people out there who have sussed out the town hall machinations.  Call us a Cassandra but we called this one out from the outset in our  Green Gauge Summer  post from July where we commented :

Is anyone taken in by this carefully orchestrated bullshit? Shall we gauge this summer by the amount of bogus stories about the alleged threat to Wirral’s Green Belt that clearly emanate from the power elite within Wallasey Town Hall?

Sure enough there has been enough wasted newsprint on the subject to turn Wirral’s Green Belt into landfill . All this is is to set up the scenario where Pip’s posse rides into town to save the day from evil Government interlopers trying to take over Dodgy City. The only problem is we’ve all seen this movie a million times ,the plot is predictable and Pip is no Clint Eastwood. He’s not so much the ‘The Man With No Name’ as ‘The Man With No Shame’ and ain’t nobody is gonna be taken in by this cowboy…