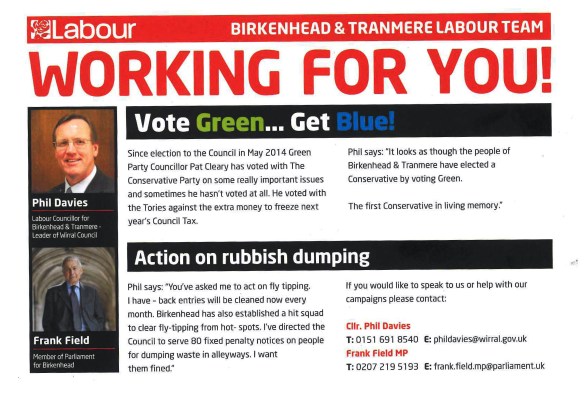 So having taken out one of “Labour’s” Inner Ring ( Bri “Nylon” Kenny) at the last local elections it was only a matter of time before the “Labour” group demonstrated that they’re green with envy at Cleary’s success at engaging with local communities and articulating what his party stands for…… something which , in their complacency , the “Labour” group seem to have given up on.

A “Labour Party” flyer sent out by a clear(l)y rattled Power Boy Pip and Frankenfield  screams “Vote Green – Get Blue” like a petulant,spoilt child who hasn’t grown up in 25 years and is used to getting it’s own way.

Our sage advice to Cllr Cleary is not to worry – believe us this isn’t the first smear campaign the “Labour” power elite have organised against a Green !!!………

The most heartwarming news of the local elections was the astonishing result of the Green Party ‘s Pat Cleary taking the Birkenhead & Tranmere seat.

And so we say “Bye Bye Bri” and farewell then to Labour cabinet member Brian Kenny who was very much part of Labour group power elite.

Meanwhile a less than gracious Power Boy Pip dismissed the momentous event as a “protest vote”   Displaying his usual lack of political acumen he failed to elaborate on what this was actually a protest against and at the same time displayed his contempt for the voters of Birkenhead and Tranmere. Could it be they were voting for someone who actually bothers to be active in the community and can cogently explain the Green Party’s ideology?

Meanwhile the usually mute Alison McGovern ,who apparently is a Wirral MP ( who knew?),popped up out of hibernation and offered the unique insight that only a MP can bring to the party  by saying  “you can get funny results at elections”.
Thanks for that Ali Bongo – you can get back in your (ballot) box now.

No reaction so far from Birkenhead MP Frank Field in whose constituency this remarkable result took place in – but then this is a man so much in denial he’ll say that the outcome of the election in fact endorses the wonderful work that he and his team are doing in the area.  No, Frank dearie it’s not,it’s really,really not.

Also on the way out is pesky (former ) Councillor Ian Lewis. We can only hope that his peskiness proves to be more of a potent force outside the Town Hall than inside because we need as many people as possible who are willing to shake up the political scene on Wirral.

Finally might we suggest that the result in Birkenhead/Tranmere will do more than any damning report to rattle the ruling Labour group out of their political complacency.
Whilst it wouldn’t surprise us if the resounding result is dismissed by these golf-obsessives as the “rub of the green” (geddit) we must remember that power is what these people crave and when one of their own is taken down these people must finally sit up and take note that they can no longer rely on a docile and compliant electorate – which can only be a good thing for democracy and the people of Wirral.