In the light of information we had received about Wirral Council’s Children’s Services we thought we’d do a bit of further research which included reluctantly checking out the John Brace footage of Children’s and Families Overview Committee held on January 25th .

We admit we couldn’t get past ‘Part One’  – but it was enough to introduce us to the new Director of Children Paul Boyce (forgive us but his title is giving us flashbacks to ‘The Childcatcher ‘ character in ‘Chitty Chitty Bang Bang’). Wirral Leaks readers will remember that Boyce was appointed back in October 2017 following the long overdue departure of the previous Director Julia Hassall. For further information read here :  Old Boyce Network

So what was our first impression of Boycie? Well, put it this way – as far as we’re concerned it’s never good when you can’t remember the original question asked by a councillor after Boyce has answered it .The repeated use of the terms ‘ improvement journey ‘ and ‘narrative’ didn’t help. So in answer to your question we thought the BS quotient was particularly high , even for a Director of Wirral Council .

Needless to say the councillors present appeared to be soothed and reassured . Laughably (and tragically) Cllr Moira ‘Matron’ McLaughlin thanked Boycie for his ‘realistic’ presentation. Because as we know Matron spent many years being duped by incompetent,dishonest Directors in the Department of Adult Social Services (DASS) and thus allowed vulnerable people to be abused over a prolonged period of time .

In the understatement of the year so far Boycie admitted there was ” a bit of work to do” and ” we’ve got a way to go” in Children’s Services . There was some ‘tough talk’ about not wanting social workers who don’t know what good practice looks like to work for Wirral Council anymore .

Whilst Boycie reminded councillors of the reality visits they would be undertaking to check the claims that Children’s Services was heading in the right direction on their ‘improvement journey’ and that there was ‘depth to the rhetoric’ ( see what we mean about the BS quotient?) can we ask him whether Sandra Dykstra is what ‘good social work looks like’ ?  (see below)

Therefore we challenge Wirral councillors to consider the ultimate Children’s Services reality check. In answer to the simple question “Why are there so many looked after children in Wirral”  this is the response they won’t get on their carefully managed visits. Simply because the quality of management in Children’s Services is – and always has been – appalling and your much lauded new agency recruits are motivated simply by money and we guarantee will be out the door when it all gets a bit messy. And believe us – it will. 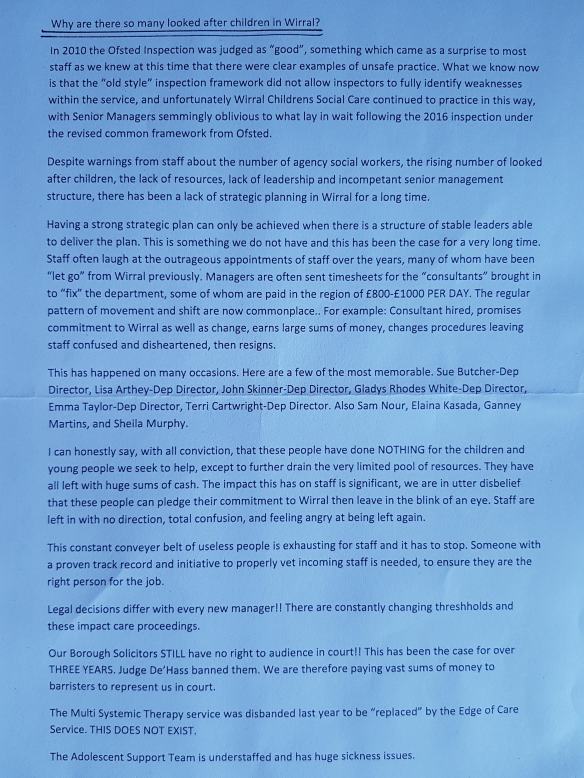