Apologies if we’re a bit late to the planning party but events have rather overtaken us this week . However we have been asked for your support against a planning application  concerning Ashton Court ,West Kirby  that comes before tonight’s Planning committee.

It will be interesting to observe the actions of Planning Committee Chair (!) Cllr Steve ‘Foulkesy’ Foulkes on this particular agenda item particularly considering the conflicts of interest involved with him being a board member of Magenta Living. But then this is Wirral Council where all kinds of conflicts go undeclared and unchallenged.

Here are the details of one of the objections to the plans:

3.      ‘Magenta Living’ has created three companies to privatise its housing stock. They are ‘Starfish Commercial’, ‘Bamboo Lettings’ and ‘Hilbre Homes’.

4.      The previous two identical applications were submitted by Starfish Commercial.

7.      Six petitions have now been submitted to the Council, objecting to this scheme.

8.     A large number of West Kirby residents want to see the Ashton Court flats refurbished, modernised and occupied, once more, by elderly people.

9.     The Lead Local Flood Authority (the LLFA) objects to this application and recommends refusal of planning permission contrary to what is printed in the Ashton Court Agenda, under the heading ‘CONSULTATIONS’.

“……the Lead Local Flood Authority object to this application and recommend refusal of planning permission….” adding “….the proposed scale of development may present risks of flooding on-site and/or elsewhere if surface water run-off is not effectively managed”.

The LLFA also states that “….there is no information whether the system will be in private ownership or offered for adoption, who will be responsible for maintenance and how maintenance of unadopted communal components…….will be secured and funded in perpetuity”.

The LLFA further adds: “In the absence of this information, the surface water flood risk resulting from the proposed development is unknown and this is therefore sufficient reason in itself for a refusal of planning permission”.

Reasons are given including one that states: “Surely, a refurbishment is possible and less costly, and would maintain the green space that is under threat from this application at the centre of Banks Road”.

Why is there no mention of the Wirral Society objection in the Ashton Court Agenda document under the heading ‘CONSULTATIONS’?

Why is the Agenda item ‘CONSULTATIONS’ so misleading and incomplete?

13.             Some West Kirby residents have suggested that the Council compulsorily purchase the Ashton Court retirement flats.

14.             Some West Kirby residents have expressed their desire to see the Ashton Court flats awarded listed status…….as an example of 1960s council housing.

With just under a month to go until the local council elections the electioneering seems to be in full swing . Leaflets, meetings , canvassing , campaigning, photo opportunities and doorstepping galore.

Therefore we’d appreciate your thoughts and observations on the people who appear out of nowhere every couple of years promising you the earth – and who usually end up delivering the third world!

We’ve already had a few contributions from people telling us they’ve had encounters with spectacularly naive or deeply manipulative  prospective candidates who when challenged about their respective parties (both locally and nationally) claim that they’re different and they’re the one who will challenge the local hegemony and change the world. To which the only sensible answer is : “Yeah, whatevs!”

One such correspondent writes:

I was talking to a group of people today in Upton who had set a table up with the Stop Hoylake Golf Resort petition, I was just about to say signed it etc…when one of the guys started telling me all about the campaign etc……I said that I thought it was being pushed through and many local people don’t want it….the chap went on to tell me they were all Labour Party members and they didn’t want it and he said that this was all down to Phil Davies and ‘his core buddies’ .This chap then produced a planning application and said ‘read the highlighted last paragraph of this! It said ‘ Upon planning permission being granted the developer will give Wirral Council £300k’ I was flabbergasted never seen the document before or heard anything about a ‘sweetener’
Talk about a conflict of interest…..just thought you may find this of interest.

Of course whilst this is interesting it isn’t news to us. It’s hidden in plain sight here : Hoylake Golf Resort (Cabinet November 2016)  and expertly highlighted in this John Brace blog post : Did Hoylake Golf Resort developer offer £300 ,000 if its planning application is approved . Although it must be said we particularly  liked the reference to Wirral Council leader Cllr Phil ‘Power Boy Pip’ Davies and ‘his core buddies’ because as we know he’s all about political power for the few and not the many!

However this is a shining example of what we always say about election time. This is your chance to find out what is actually going on in your name, to ask all those awkward questions and hold local politicians to account. REMEMBER : THEY ARE ACCOUNTABLE TO YOU! Think about local issues that matter to you and vote accordingly. Don’t just put an X in the box because the named candidate wears a particular coloured rosette.  Spoil your ballot paper if you must but please,please,please engage some critical thinking. After all these are critical times!

Meanwhile we at Wirral Leaks are happy to receive contributions for either satirical or political purposes. However we reserve the right to only publish information about issues we support or we can take the piss out of.  It’s how we roll! Accordingly we are more than happy to publish details of a ‘Social Housing Public Meeting’ to be held on Friday 13th April (!) which is chaired by Jo Bird , the Labour candidate for the Eastham ward.

Wirral Leaks readers will know our position on social housing in general and Bamboo Lettings in particular from reading our House of Bamboo and Bamboo- zled – The Future of Social Housing? posts. We recommend for those particularly interested in the future of social housing to attend. All we will say is that the crucial test for us will be whether Jo Bird, if elected, would be prepared to challenge Power Boy Pip’s ‘core buddies’ Cllr Steve Foulkes and Cllr Stuart Whittingham on their apparent stance, as Magenta Living board members ,on the issue of social housing. 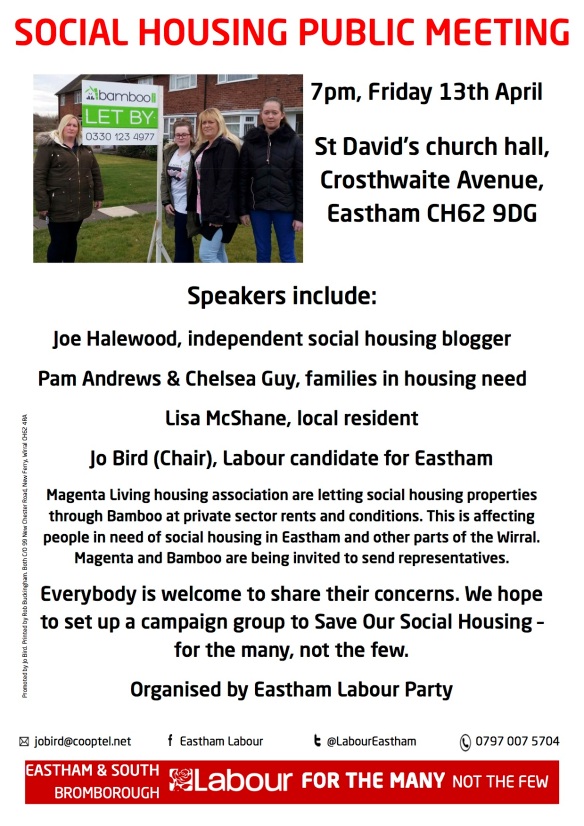