We’re really sorry we started this but since we’ve been monitoring the local and national media appearances since Birkenhead’s Labour MP Frank Field became an ‘independent’ we could make Wirral Leaks a wall-to-wall Frankenfield-fest…but ain’t nobody got time for that.

However there are a couple of stories which have caught our attention this week which we think highlight his hypocrisies.

The story concerns Sue Perkins ,ex Great British Bake Off presenter and leading media figure from the LGBTQXYZ community – we really try and keep up with the latest acronyms but apologies if this is not quite right – and her less than flattering assessment of Brexit in general and Theresa May in particular on a late night TV programme ‘The Last Leg’ on Channel 4 that about half a dozen people accidentally watch after they’ve got in from the pub. In response to the question How do you think Theresa May has handled this week? Do you admire her?’ Perkins replied :

‘In the same way I admire s*** on a shoe in that it endures and no amount of using a twig on it or power-hosing it will remove it, so her ability to cling on is the stuff of legend and I don’t want it near me.’

Conservative and Labour politicians reacted with fury to the comments yesterday, including Ministers who demanded an apology from the star.

MP Frank Field said: ‘There is a worrying trend in public life that people are getting more and more obscene and violent in their comments and are being allowed to get away with it. What Sue Perkins said crosses the line. Channel 4 and other broadcasters should not let her on again.’

We’d have thought there were more pressing matters for MPs to comment on at the moment but it does allow us to reiterate a point we’ve made before about powerful politicians. Frankenfield, in particular, seems to be cursed with the delicate sensibility of a Victorian maiden aunt forever being offended by the vulgarity and lack of deference of the ‘others’ towards their ‘superiors’. But then Frankenfield has always had a particularly low threshold about what he considers ‘obscene’ . We must tell you ‘The Mary Whitehouse Story’ one day which concerns a poem the anti-obscenity campaigner once showed Field which described Jesus Christ having sexual intercourse with Mary Magdalene. Apparently he’s never got over it…but we’ll save that one for another time.

However back to the point that we wanted to make. We believe that  Conservative and Labour politicians reacting with ‘fury’ to the Perkins’  ‘shit on a shoe’ comment is all about powerful people wanting to control the language,control the political discourse and ultimately control everything. It’s not only as though freedom of expression doesn’t exist – and some might say it doesn’t- but as an expression of righteous anger goes it’s a far cry from the actions of France’s gilets jaunes!

We’re left wondering whether Perkins first encountered this earthy expression when mixing with Wirral Council reps at the Local Government Chronicle awards in 2015 ?

As we know ,since the picture above was taken Kevin Adderley and Joe Blott have left the Wirral Council ‘shoe’ courtesy of being power-hosed off with vast amounts of public money whilst council ‘leader’ Cllr Phil ‘Power Boy Pip’ Davies is scraping himself off before he’s kicked to the kerb. Unfortunately the stain they all leave behind will be indelible and forever stink to high heaven.

As far we’re concerned another quote published this week by a different  national newspaper about their making Universal Credit work campaign (to which we not be providing a link) demonstrates the further hypocrisies at play:

Frank Field MP, Chair of the Work and Pensions Select Committee, also congratulated The S*n on its campaign.

Might we suggest that for many people on Merseyside any association with the tawdry rag following its campaign of hate after the Hillsborough disaster is more worthy of the word ‘obscene’ than a pottymouthed celebrity putdown of the PM. 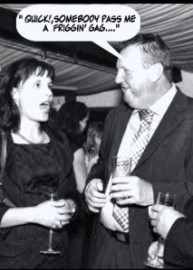 Deggsy and Foulkesy may be notorious – but Bergman and Grant they ain’t.

Wirral Council obviously thought they could publish the Thynne 2 report and hope it would just all blow over during the silly season.

Sorry to tell you guys but you’re not getting off that easily as we intend to continue to serialise your deep and everlasting shame in gruesome detail.

Talking of gruesome – we’re talking gruesome twosomes, threesomes and foursomes on this particular post. For starters who’d’ve thought that ex-Wirral Council alumni Martin Morton and Emma Degg would ever blow from the same whistle?. Especially when the latter allegedly called the former “mad” – which let’s face it is a bit rich (pun intended) coming from someone who was “bedazzled” by Kevin “Addled” Adderley . A man who once wore a burgundy cummerbund and matching dickie to an awards ceremony where Wirral Council received a Most Improved Council award without a trace of irony or indeed fashion sense. Even enthusiastic cake guzzler Sue Perkins pointed at him as if to say : “I’m so glad I take the other bus to Hebden Bridge…..”

As we’ve previously reported it was the Morton/Degg duo , who independent of each other , instigated the Thynne 2 report. Which let’s face it has to be the most unlikely combination since snaggle-toothed halfwit Lib Dem MP Lempit Opik hooked up with a Cheeky Girl.

We note that Patricia Thynne rather ungraciously describes Morton in her increasingly looking pisspoor report as having ‘achieved a certain local notoriety as a whistleblower’. We’re sure he’d be delighted to have that glowing reference on his CV . Anyway we  would have thought that Degg aka Uggs aka Spinderella would have been a more worthy contender for the notoriety tag. Although perhaps for different reasons!. A comment which will no doubt feeds into the victim schtick that Degg is still pedalling. The report states how Degg :“knew that as a result of this further investigation she will get even more pillorying in social media but it was more important for her to tell the truth.”  Degg’s explains that “self preservation” led to her keeping schtum for well over a year before belatedly gegging in on the Wirralgate story. Oh come off it Joan of Arc shouldn’t that be “self interest”? .

Seems that Thynne was taken in by the serial eyelash flutterer and lets her off with a mild rebuke saying that Degg had showed a “rather surprising lack of political nous”  by not coming forward sooner. Now I think we’re all agreed that if there’s one thing that La Dame De Rocket Dog  did not lack and that was “political nous”.

If Degg was really interested in telling the truth perhaps she could tell us all about the infamous £48 ,000 payment she received and whether Foulkesy had any involvement in that particular episode.

Although to be fair and credit  where it’s due , whatever Degg’s  motive was  – our guess is getting back at Foulkesy for the role he played in her demise – at least she spoke up. Unlike the cast of cowards who have either for financial gain , career advancement  or self interest preferred to play the corporate game .

Graham Burgess – care to tell us how Frank Field attempted to “compromise” you by “demanding” you making £48,000 payments to the people who could bring his personal empire crashing down?

Surjit Tour –  care to tell us how keen you once were to get your hands on the Wirralgate tapes for personal benefit and not the public interest?

David Armstrong –  care to tell us when acting as Chief Executive you cravenly caved in and agreed that Field could appoint his mate Nick Warren to stitch us all up into making an unjustified  payment of public money to people who just happened to press the ‘record’ button ?.

Joe Blott – care to tell us why you think co-ordinating a cover up of all the above makes you the very model of a modern public servant?