Our thanks go to John Brace for filming last night’s meeting of Wirral Council Standards Panel and for giving us the heads up that we would be reunited with some familiar Wirral Leaks ‘favourites’.

John hasn’t uploaded all of the five part mini-series yet but from what we’ve seen it’s the usual Wirral Council Standards Panel farrago bogged down in procedure ,protocol, partisan politicking and pettiness. However we look forward to John’s incisive eyewitness report with snippets from the investigation report in question at a later date.

The actual hearing concerns an allegation brought against Conservative Cllr Paul Hayes councillor by the Professor Maggie Atkinson – the Independent Chair of Wirral Safeguarding Board. Professor Atkinson alleges that Cllr Hayes was in breach of Wirral Council’s Code of Conduct for suggesting that the decision not to publish the Serious Case Review into the Rajenthiram brothers Child Sexual Exploitation (CSE) case was part of a ‘cover up’ ( further allegations made against Cllr Ian Lewis and Cllr Tom Anderson found there was no case to answer).

Ironically the investigation report was written by ex Wirral Council solicitor Simon Goacher of Weightman’s who are the go-to legal firm that Wirral Council call upon to  when it comes to cover ups (most notably the infamous and illegal ‘four week delay’ in the provision of adult care services.) This has not only enabled Wirral Council to hide behind ‘legal privilege’ but allows them to state they have sought external legal advice and therefore everything is ‘legit’ when in fact the exact opposite is true – as was the case in an unreported case of further unlawful charging of disabled people that Weightman’s were also called upon to help put a bit of concealing legal gloss on.

Meanwhile initial observations from us indicate that the Standards Panel played their usual roles – Cllr Phil ‘Anodyne’ Gilchrist dithering about and being in complete,fence-sitting Lib Dem mode. Cllr Chris ‘Bulldog’ Blakeley in full on belligerent ,bulldog chewing a wasp mode and Cllr Moira ‘Matron’ Mc Laughlin in arms folded, eyerolling,  ‘Matron-Knows-Best’ exasperation mode (though we did enjoy the little snipe at Wirral Council’s head of law Philip McCourt – is the honeymoon period over we ask ourselves? )

We await further instalments with interest and be grateful for the fact that at least John Brace was allowed to film this particular Standards Panel and wasn’t physically prevented from entering the Committee room , as was the case in the infamous 2016 Cllr Steve ‘Foulkesy’ Foulkes  Standards Panel debacle. Now, if you really want to talk about cover ups… 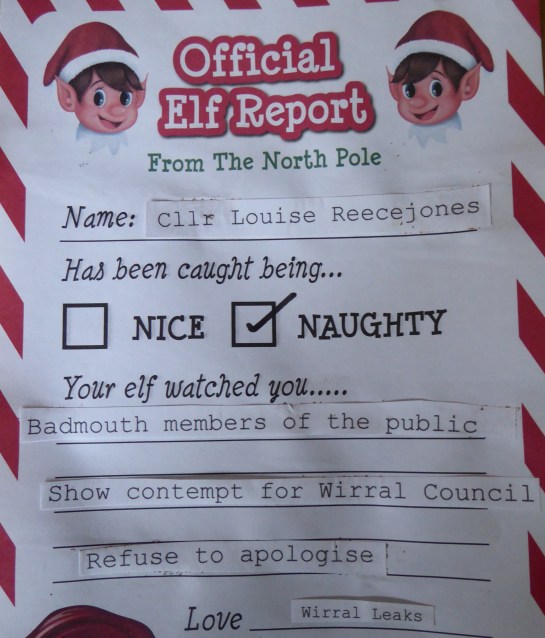 Now we don’t know if it’s the thought of  our imminent demise but we have been flooded with leaks and links to interesting news stories these past few days including news that ‘The Curse of Leaky Towers’ has struck again as we hear that well travelled serial cheque collector Bill Norman has ‘resigned’ from Cheshire East Council. But more on that story later as they say on the TV news……….

Today’s story is concerned with another of our irregular regulars – Cllr Louise Reecejones (LRJ). As we harked and heralded  LRJ was due to  appear at last night’s full Council meeting. And according to a few of our sources appear she did …… somewhat like a fallen angel.

However despite being shamed into making an apology by  Cllr Moira ‘Matron’ McLaughlin for being a very naughty girl – oh the irony! – no apology was forthcoming. Instead LRJ told the members in the Wirral Council chamber that she was taking legal action against the local authority in general and current and former head of law (Philip Mc Court and Surjit Tour respectively)  in particular . Oh and she was also reporting these two legal bods to the Solicitor’s Regulation Authority (SRA) . We understand that it’s not the first time that Tour has been reported to the SRA – but LRJ need not hold her breath that the Brotherhood of Law will take any action. They’re like the Local Government Association (LGA) for lawyers.

Exasperated elected members wailed ‘why ,oh why’ couldn’t they take any ‘meaningful sanctions against LRJ , conveniently forgetting that the Standards regime was set up BY THEM to avoid any  councillor ever having to face any meaningful sanctions in the first place!!!

Meanwhile, as apparently McCourt comes and goes as he pleases and is a mere interim he clearly wasn’t prepared to be around when LRJ was having a pop at him. Therefore local Tory leader Cllr Ian Lewis asked the Council legal rep for the night  (Vicki Shaw) was there anything they could do to make LRJ bend to their will ?

‘Fuck all’ was the answer.

Obviously this isn’t a direct quote from Prissy Miss Shaw , who apparently seemed to be enjoying feeling very important sitting on the podium to the left of Mayor Ann ‘Moving Forward’ McLachlan (but then most people in the Council chamber seemed to be left of McLachlan).

Indeed we hear that Shaw is currently making a name for herself among the Council power elite for being ‘a safe pair of hands’ and we don’t mean that as a compliment!

As it would seem that both within the Council and the Labour group LRJ is essentially Ellen MacNomates  (the female version of Billy No Mates , and so named after lone round-the-world yachtswoman Dame Ellen MacNomates ) her days as a councillor must surely be numbered .

However we are led to question as to whether LRJ deserves to be known as Wirral Council’s naughtiest elf . We’d nominate Cllrs Phil Davies, George Davies and Steve Foulkes over LRJ any day of the week. But then in the unlikely event they were ever called out publicly like LRJ has been we suppose the whole shelf would come tumbling down with all of Satan’s little helpers wouldn’t it ?