As this leak from the Labour Campaign Forum (LCF) proves the campaigning for the local elections to be held in May has already begun.

The man in charge (no laughing at the back) is LCF Secretary  Cllr Paul Stuart, a man who is a past master at plotting and scheming as certain members of the Wallasey Constituency Labour Party (CLP) can testify.

As you can see the local Labour Party has but one target in May and that is to oust Pat Cleary the incumbent Green councillor in Birkenhead & Tranmere .

The campaign is based on the desperate, lazy and unimaginative # VoteGreenGetBlue . The man they’re relying on to achieve a Birkenhead & Tranmere Labour stranglehold is Paul Jobson (see below). Doesn’t he look peachy keen in his Labour Party fleece with his name on? Bless! Just to reinforce the lowest common denominator aspect Jobson is seen here being promoted on the Frank Field’s Community News Facebook page (run by Anna McLaughlin – daughter of Labour Cllr Moira ‘Matron’ McLaughlin) . No doubt to enable him to trade on the Field brand name. It’s just a shame that Jobson has chosen to promote his credentials by purloining the single -use plastic (SUP) campaign championed by , yes you guessed it ,Cllr Pat Cleary. Oops!

Read all about it here : Cutting Plastic Waste In Wirral

As a source tells us : “The motion, to begin with, was highjacked by the Labour Party in the form of a press release and a story with their friends at the (Liverpool) Echo.”

Article here: https://www.liverpoolecho.co.uk/news/liverpool-news/wirral-aims-first-place-merseyside-14021616
More a case of #VoteRedGetGreen ! This is reinforced by our final picture as it would seem that Team Foulkes may have misunderstood the Cllr Stuart memo! Oops ! they did it again! #LETSGOGREEN 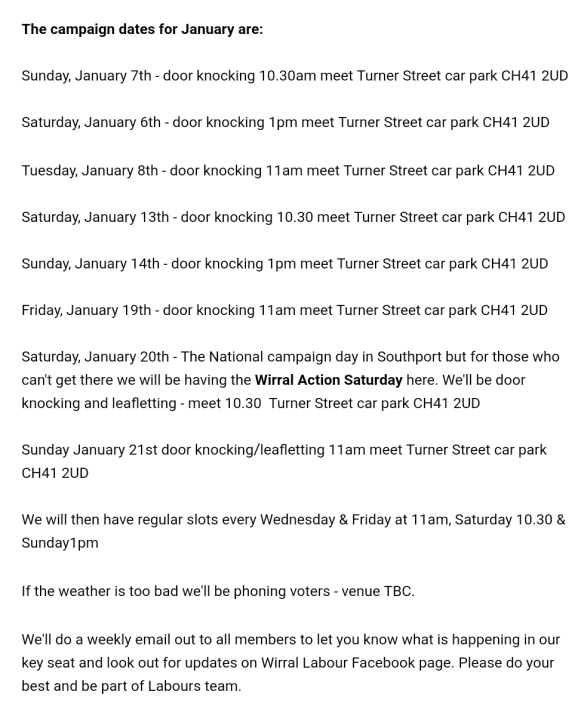 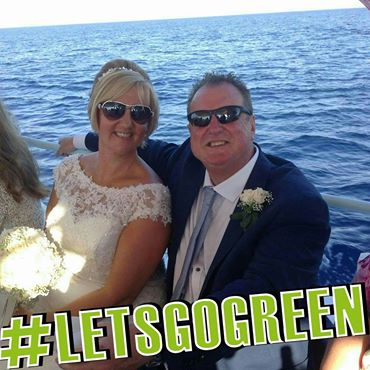 So how are you good people bearing up to the pressing of the flesh and unexpected visits from strangers suddenly seeking your votes to keep them in the easy life to which they have become accustomed? Sickening isn’t it?

Fear not – Wirral Leaks is here to delve into the dark depths of the democratic process and reveal what an utter sham modern politics has become.

We note that Wirral West political failure Esther McVey has landed on her kitten heels yet again and inherited the safe Tory seat of Tatton previously occupied by former Chancellor George Osborne. Decorum prevents us from commenting further -otherwise c’s and t’s would abound. And we’re not talking Conservative or Tories!

As you can see from our main picture , one of the first streets you enter when you cross the border from Birkenhead into Wallasey is funnily enough called Corbyn Street.

So let’s start off with the battle for Wallasey. Not between the political parties but the in-fighting within the Wallasey Constituency Labour Party (CLP). Let’s hope they’ve called a ceasefire in the run up to the General Election (GE). After Brickgate, and the sudden suspension of Wallasey CLP members for false allegations of homophobia and just when current incumbent Angela Eagle declared her challenge to Jeremy ‘Jezza’ Corbyn’s leadership we now understand Wallasey CLP will not meet until after the GE. How convenient for political opportunist Ange seen here slumming it over the weekend at the Typhoo factory in Moreton

You only get an OMFG with Typhoo. Ange covers up – and not for the first time!

Of course Ange is a rank amateur when it comes to local politicking. However the master of the genre, Birkenhead MP Frank Field (aka Frankenfield)  is showing signs of slacking. Has he peaked too soon ? ( oo- er missus!). He’s already called up the Green card ( yawn!) and attacked an easy target in the rotund shape of  ‘Sir’ Philip Green.

The tittylipped billionaire peer of the realm immediately hit back and said Frankenfield was using him as a ‘political football’. If ‘Sir’ Philip lived on Wirral instead of sailing around on his yacht in the Med he would understand that it is what Frankenfield does best #Wirralgate!

All we will say is that those who live in glass houses shouldn’t throw stones. As far as we’re concerned Field is currently camped (no pun intended) in Sefton Park’s Palm House.

Needless to say Frankenfield has already called the ‘starving mites’ into the political equation.

The only place he has left to go is anti-social behaviour. To which we can only say has he checked out the Birkenhead CLP lately? If he has he must realise that ASB (#Foulkesy etc;) is essential to keeping this vile hypocrite in power.

Now that Wallasey MP Angela Eagle has withdrawn from the Labour leadership contest we thought we’d take some time out to reflect on what has to have been the most misbegotten overthrow attempt since Lambert Simnel was a pretender to the throne of Henry VII.

Wirral Leaks suggests there are 3 reasons why it all may have gone horribly wrong for Our Ange :

Whilst Her Ladyship thinks she’d make a great Brown Owl for the village hall Brownie pack was anyone ever convinced that Eagle  would be a great leader of the Labour Party?. Now as you know we’re very much  from the school of thought that if you want to tell people the truth you make them laugh otherwise they will kill you. Therefore we think the Dead Ringers skit on Radio 4 absolutely nailed Eagle’s leadership qualities. From her will she ? , won’t she ? , who cares?  -just bloody get on with it!  leadership challenge to her awkward, faltering media appearances listen here from 16:40 on as Our Ange’s entire campaign is summed up in a single sketch:

“I may sound like a nervous badger trying to cross a busy motorway but I’m ruthless. Dead ruthless. I’m hard as nails. If I want something I’ll take it …then I put it back . I apologise for taking it and cry when the police are called.”

Threats and abuse are never to be tolerated but if there’s one thing we’ve learned from observing politicos (and especially local ones) is that they sure know how to play the victim.

Now we don’t know (nor does anyone) who the perpetrator was or what the motivation behind the brick through the window of the shared premises  where Our Ange’s constituency office is based but Ange herself was very quick to lay the blame at the door of aggrieved local Corbynistas. Although listening to her you ‘d think it was Wirral’s Kristallnacht . Now we’ve never attended a Wallasey CLP meeting and it’s highly unlikely we’d ever be invited so we don’t know what went on between party members.

However what we do know is that if  but if you mislead those constituency members and tell them that everything is fine and dandy and that you support Jeremy Corbyn 100% and then next thing they know you’re mounting a leadership challenge and calling him fit to burn then it shouldn’t come as a surprise that you’re constituency members feel they’ve been misled and are a bit miffed.

And so after all that – not only did you not become Labour leader your constituency members wanted a vote to deselect you as their MP.  As a result we now understand that the whole of the Wallasey Constituency Labour Party has now been suspended by the Labour Party hierarchy. Way to go Ange!.

“Angela” – the brand was launched at an ill-fated press conference held to announce her leadership challenge where all the leading main political commentators had dashed off to something much more interesting – Andrea Leadsom’s withdrawal from the Tory leadership contest (oh the irony!).

The pink banners ,the pink flag, the pink jacket, the pink lipstick. More TV daytime host than a potential head of state “Angela” seemed to have hired the same team responsible for the  PR car-crash that was Harriet Harman’s pink battle bus from the last General Election campaign. You’d think they’d realise that it takes more to woo women voters than the colour pink. A marketing guru overdosing on frappucinos must have been paid all kinds of crazy money to come up with the genius idea  :” I know let’s go for pink. Girlies like pink- a lighter , less threatening shade of red”.So much for making much of her female credentials it’s like feminism never happened.

Might we suggest that to keep the attention of the media and musical theatre fans she should should have gone for the full “Think Pink” production number with the built in catchphrase : “Red is dead, Blue is through, Green obscene…..”

What if they gave a press launch and nobody came?.

Angela ” I am a woman” Eagle displays fine comic timing as she has a tumbleweed moment launching her Labour leadership campaign.

Locally the real political interest was that Our Ange could face a vote of no confidence by the Wallasey Constituency Labour Party.

Consequently Our Ange’s campaign launch was sidelined as a bit of a sideshow. A case of blushes all round to match her jacket. And before anyone says “you wouldn’t say that if she was a man” we would reply “Oh yes we would!”. The cynical branding of “Angela” as though she’s a bloody daytime TV host is just screaming to be satirised.

We don’t know who’s handling Eagle’s campaign but we think it’ll take more than a “softer image” makeover with lashings of pink to win over the local so called reds under the bed . Anyway in the local vernacular she comes across soft enough as it is…..

And they said I was unelectable!. If Our Ange is their new  leader the Labour Party will be like this eagle on my desk – stuffed!

We don’t mind admitting when we call things wrong and our prediction that  Wallasey MP Angela Eagle would return to well deserved political obscurity following the slow and agonising demise of poor Jezza Corbyn was way out. Little did we know that Our Ange was living up to her surname – going in for the kill like a carrion bird (not to be confused with Barbara Windsor) in the hope of feeding off the rotting cadaver of a once great party brought low by poisonous legacy of Blairism . We can almost hear  Jezza  whisper as another backstabber sticks the knife in – ” Et tu , Ange?”.

However in post-Brexit Britain the old certainties are no longer there – as Our Ange sheds the crocodile tears in a Radio 4 interview ( because as everyone knows being a soggy-faced whingebag is the main attribute of a natural born  “leader” ) the local Wallasey Constituency Labour Party (CLP) were reminding her that they put her where she is and they are quite happy with Jezza thank you very much. You’d think a  CLP would be delighted to have their MP as the next Labour leader wouldn’t you?. But not the Wallasey lot – they’re a feisty bunch by the sounds of it (see also their “No to Mayor Joe” stance on the Metro Mayor nominations). No doubt there’ll be the predictable cries of entryism! bullying! miltants! as the Labour old guard don’t like it when the proles don’t do as they’re told and suddenly realise the old certainties are no longer there.

Talking of old certainties ( he’s older and wiser than God and he has the one of the largest majorities in the country) Frankenfield – despite undermining Corbyn’s leadership since he was elected – must be feeling quite smug  in the knowledge he won’t be  facing any such challenge from the servile  Birkenhead CLP . After his brush with Labour militants in the 1980’s  we suspect that Frankenfield will have ensured that local meetings are very much a Corbynista free zone. Maybe Our Ange needs to take heed from a wily old bird like Field when it comes to gathering the flock!.