Wirral Leaks has been for some time highlighting the worrying situation of Wirral Council hiring highly paid consultants at exorbitant rates whilst at the same time explaining how services must be cut and staff need to be made redundant and anyway it’s all the governments fault.

Wirral Council’s use of consultants seems to be for 3 reasons :

1) For when they’re in a hole of their own making – “Here’s a shed-load of money if you write any old flannel as long as the conclusion is – “No case to answer” !

2) Absolve the Council of responsibility for decision-making  – ” It was the independent,external consultant who recommended that we cull half of our workforce and lay waste to public services.We didn’t want to really ,honestly…..”

3) Compensate for the sheer ineptitude and negligence of  council officers on megabuck salaries who seem to have absolutely no idea what they’re bloody doing!  – As her Ladyship said ” If I was on a life raft and reliant on a full set of chief officers for survival I think I’d throw myself overboard and take my chances with the sharks”

The latest beneficiaries of the Wirral Council runaway gravy train are a consultancy firm by the name of V4 who have given Wirral Council the V-sign and been paid £260,000 for what was initially a £50,000 job – SEE HERE

Nice work if you can get it and you can get it when Wirral Council officers and councillors are simply not up to the job and where it’s always amateur hour!.

Despite this work being authorised by Labour cabinet member Cllr.Chris Meaden , Power Boy Pip displays  his renowned leadership skills and plays pass the parcel by claiming  that the issue “concerns officers”. We were also interested to read about this case that “delegated powers” to  Wirral Councillors allow payment of monies up to the value of £50,000. That’ll explain the £48,000 for “hurt feelings” then!  – ” Let’s keep it just under £50,000 and we’ll throw in a couple of packets of Benson & Hedges”.

Finally Wirral Leaks would like to offer some advice to Wirral Council staff currently facing redundancy who fancy a piece of the action.

A guide on how to become a Wirral Council consultant is helpfully set out on the ever illuminating Wirral In it Together blog:

SEE HERE
The steps are:

1. Prove yourself “useful” to Wirral Council
2. Nab a 12 month contract
3. Set up a consultancy company
4. Think of a number – treble it and there you have your daily rate (£515 in this case)
5. Get your contract extended (with or without councillor scrutiny).
6. Trebles all round!

As a follow up to our “That’s A Bit Rich…” story we thought we’d like to report on how on how the other half live – the little people who fund the lavish lifestyles and inflated wages of the so-called public servants in Wallasey Town Hall. The people who are hounded for their Council Tax and Bedroom Tax so that this golden shower can indulge in Mayor-making jamborees and golf beanos and far east junkets and lavish refurbishments.

Their creative funding of such indulgences includes the curious tale that Wirral Council has received what is known as a discretionary housing payment of over £900 from a ridiculously named housing association with whom “associations” with the Council go back a long way . The amount paid to the housing association on behalf of a tenant allegedly paid in error has been compliantly handed over to the Council although it is believed that the latter have no legal right to the money as it rightfully belongs to the tenant.

We suspect that this payment has something to do with the dreaded Bedroom Tax – upon which Wirral Council’s stance is simply reprehensible. They may like to blame central government for introducing the tax ( no we won’t call it a spare room subsidy) but fail to emphasise that it is a local government decision on how – or even if – it’s implemented.

Could it be that Wirral’s Labour Council want to play the blame game for political ends and are using vulnerable people as a means to do that?

Thankfully we hail Joe Halewood and his highly informative blog SPeye Joe for keeping us informed on Wirral’s shameful implementation of this Robin Hood in Reverse tax – robbing the poor to pay the rich.

The right honourable Lord & Lady left strict instructions that in their absence I pay tribute to Wirral’s First Citizen on the opening day of the Open golf championships , where no doubt  “Mayor” Foulkesy and his consort the Lovely Elaine will be courted and feted in the corporate hospitality tents.

Therefore I have to thank Wirral Leakers for sending in a delightful picture of Mayor Foulksey at a previous public engagement. I’d also like to thank them for their suggested captions which somehow encapsulate the reverence and respect that this great man seems to engender wherever he goes.

These are the winners : 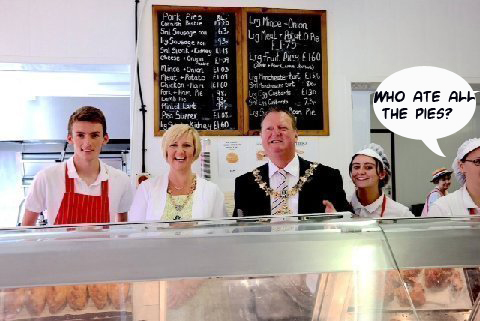 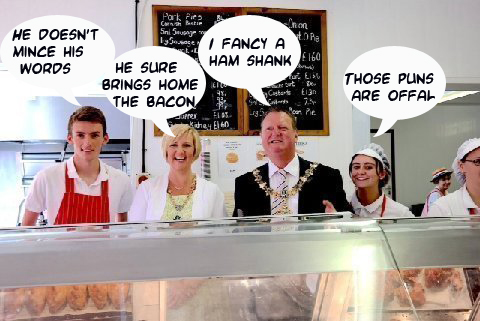 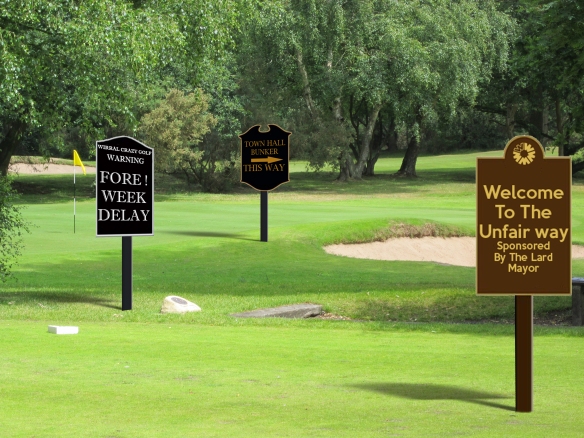 Despite protestations to the contrary “Destination Wirral” appears to be a bid by Wirral Council to turn the peninsula into one great big golf course.

Of course “Destination Wirral” is not to be confused with “Destination Excellence” (stop sniggering) the monumental Foulkesy fail that followed the publication of Klonowski’s Independent Review.

Remember how we laughed as Foulkesy  promised to adhere to the recommendations of the Independent Review and the Corporate Governance Report that preceded it, with “bible-like” devotion?

However this latest feeble branding exercise at least has the benefit of a “Destination Manager” (which sounds like a Council rebranding of Foulkesy’s mayoral chauffeur).

But then again this person seems to have a loose grasp of geography when it comes to Wirral’s boundaries themselves. Witness the recent Wirral Folk Festival (Anyone heard about it? – No thought not!)

Now please forgive us but when were Ellesmere Port or Whitby annexed by Wirral? and why would Wirral Council give money to venues to hold a Wirral Folk Festival there?

It has been suggested to us that this enables Wirral Council managers to tick a box in the pursuit of European Union funny money (European Regional Development Fund to be specific) We can only ask ourselves whether chasing the Euro will herald the return of “Eurowirral” ? – anyone remember that risible branding exercise undertaken by the Council ?

However it strikes us that if the Council were really serious about Wirral being a “destination” rather than a “deviation” that it would help if there was a Tourist Information Centre rather than relying on the likes Royal & Ancient website plugging hotel accommodation for the upcoming Open golf championships mainly out Chester way because nobody knows where “Wirral” actually is!……….

Meanwhile the Council’s obsession with golf continues unabated with news of them “consulting” about the flogging off of municipal golf courses. Except Hoylake of course !  – could this have anything to do with the postponed announcement mooted for the opening day of the Open when the Council planned to unveil the Last of the International Playboys funding partner they had lined up to thrill us all with news of a luxury golf resort coming to Wirral?

Needless to say the momentous event went the way of all Wirral Council drives down the fairway – in the rough and unplayable. Therefore we can’t help wondering whether this golf resort proposal doesn’t end up being Stella Shiu 2 and like the Wirral Waters project permanently lodged in a sandtrap.

“Wirral – Not so much crazy golf as golf crazy!”

Here we see some very,very,very important people launching a glossy brochure extolling the delights of the “Golf Peninsula”.

That’s Wirral by the way….just in case you were wondering.

So we’ve had a quick flick through this Visitors Guide expecting a flattering representation of what was formerly known as the Insular Peninsula.

Now we do realise that this is a PR push for punters to visit Wirral and therefore we’re not expecting a promotion for ASBO Tours – “You Too Can Be Traumatised By Troubled Tearaway Teens Terrorising Tenants in Tranmere”  – but we have to say this re-branding of Wirral as some kind of great big golfing theme park leaves us feeling decidedly under par (and not in a golfing sense).

Now we concede that Her Ladyship and I have only experienced the pleasures of golf from the cosy confines of the clubhouse. But we do know that many of Wirral’s most prominent public figures, past and present , have enjoyed it’s bucolic pleasures whilst donning garish Argyle Pringle sweaters and chafing polyester Farah slacks.

We also are led to believe that during the summer months it has been known for Wirral Council’s most important business meetings to transfer from Houlihan’s pub to the golf links.

However as much as we like to see the promotion of this once proud coastal promontory we do feel like Wirral Council are putting all it’s golf balls in one basket. We’d like to think that the young people of Wirral deserve better future job prospects than becoming a golf caddy.

More pertinently how can we have trust and confidence in the current incumbents of Wallasey Town Hall delivering on their seemingly endless promises to change it’s ways?

Their strategy seems to be one of distraction : “Who needs to be  “Open and Transparent ” when we’ve got the British Open coming to Hoylake !”

Meanwhile the Council elite seem to be permanently stuck in a bunker or according to our faithful factotum and golf aficionado Verity, hopelessly thrashing about like Jean Van De Velde at the last hole of the 1999 British Open at Carnoustie.

As she says: “Triple Bogeys All Round!…”