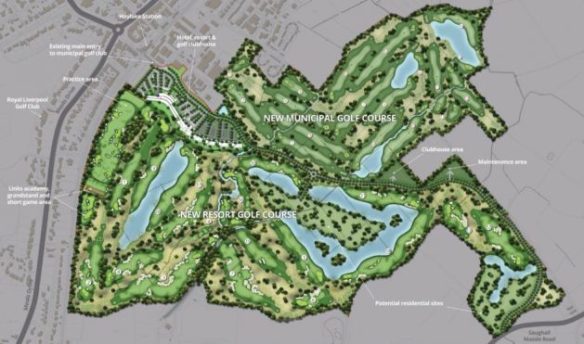 We confidently predict that next week will be  a challenging one for the ruling administration at Wirral Council.  As we heralded in our  Message from Wirral Green Space Alliance : Extraordinary Wirral Council Meeting 25th February there is a coordinated protest prior to the meeting which is concerned with the long-running  ‘Hoylake Golf Resort’ saga.

There is a growing alliance of protestors against the luxury homes with a golf course proposal and from some unexpected quarters. Who would have believed that having gone independent as a councillor that ex- Labour Cllr Moira ‘Matron’ McLaughlin would suddenly be ‘independent’ of thought ? Now having helped set up an ‘independent group’ at Wirral Council (along with Cllrs  Chris Meaden and Michael Sullivan ) Matron now feels free to express doubts on her former leader Cllr Phil ‘Power Boy Pip’ Davies’ pet project.

While Cllr McLaughlin would not reveal which she would vote for or against (at the Extraordinary Meeting) , she revealed her “grave concerns” about the huge project, and the “capacity” of officers to carry it through…

Anticipating the strength of growing opposition Pip and his ever decreasing cohort of cronies have been busily preparing their justifications and prepping the press.

We understand that this preparation for tomorrow included a visit  by Pip , Cllr Angela ‘Excited’ Davies and Wirral Council CEO Eric ‘Feeble’Robinson to Celtic Manor Golf Resort in South Wales on 6th February . Labour councillors were briefed about the visit last week (18th February) giving them a week to rehearse their roles and memorise their lines in time for tomorrow’s meeting. This will no doubt include reference to the news found in the Place North West article  Hoylake’s £200m golf resort ‘ready to go’ as contractor joins team where we find Jim Anderson of developer Nicklaus Joint Venture Group (NJVG) , saying the Hoylake Golf Resort proposal was “fully funded” with an aim to “start work the next day” if planning permission is secured. Anderson goes on to say :

Hopefully we won’t be used as a political item one way or another. It’s important for us to get out to the people to understand what their concerns are; we have a year of planning where we can look at those concerns and hopefully address them, and a lot of that will be when they understand the true nature of the project.

The doors of the golf course are very much open. You don’t have to be a member to come into the clubhouse to have a coffee or have a pint or use the restaurants; it’s there for everyone. It’s a misconception that this is a playground for the rich and only they can use it, and frankly, the business model wouldn’t work if we didn’t get engagement with the local population.

Under the circumstances we would expect Mr Anderson to be at tomorrow’s meeting to help address concerns of protestors and engage with the local population. As for the Hoylake Golf Resort being used as a ‘political item one way or another’ does he know that it’s a) Wirral and b) a local election year ?… 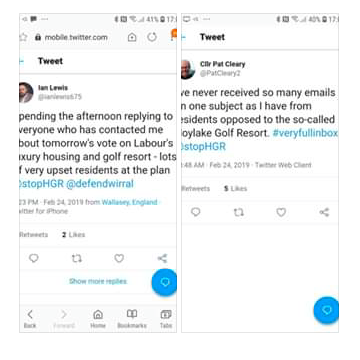