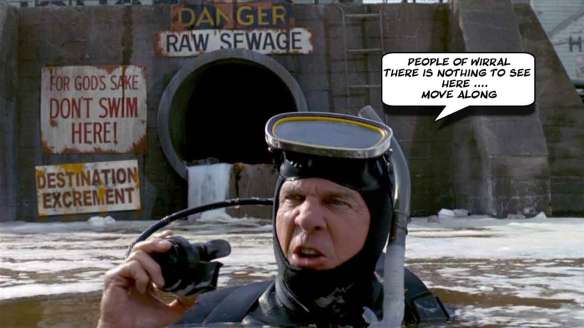 After the toe-curling Nuremberg rally-like address last week by Colonel Burgesski to Wirral Council staff – that all was now well, there is no longer anything to see here, so please move along; Frank Drebin, eat your heart out – it was a relief to see business has returned to abnormal today.

It is only, after all, the most poignant day of the year, so let’s dunk our heads as deep into the trough as we possibly can, eh?

Lord and Lady Leaks sat appalled today as we witnessed the mutual love in at Birkenhead Town Hall, where the not-at-all-great and the not-even-slightly-good milled around with the decent, the honest, and the friends and family of the injured, fallen, and serving military personnel who collectively put the Brighton Street weasels to shame.

All of it paid for by YOU dear Wirral Council taxpayer, too!

Yep, it was a freebie that only last year ol’ Burgesski deemed a bad use of public funds. But this year he changed his mind on opening the bar to all and sundry. Maybe he needs some pals?

“Who is Wirral Leaks?” they murmured and fidgeted, as the lady pianist played in the background in the main reception room, and also as the Scotsman piper played prior to service outside the town hall.

But they soon forgot that as the bun fight began for the free drinks, served in the “old” mayor’s parlour.

Beer on tap, every spirit you could think of. And all free. In a refurbished parlour (Foulkes is coming after all, huge and red like the Coca Cola Christmas truck) that surely cost thousands.

What they forgot to do, of course, was to think about the day itself. Rather than a barney for our Brighton Street brethren, this was supposed to be a day of reflection.

But the lift at Birkenhead Town Hall was too jittery, so Lady Leaks was horrified to see old soldiers having to climb four sets of stairs.

Missing, though, on such an auspicious day, were Spinders and Addled. Why? Prior appointment? Lady Leaks thinks she should be told…

3 thoughts on “LEST WE FORGET ….TO HAVE A FEW JARS AT THE TAXPAYERS EXPENSE”