However it would appear that we have an explanation for the ongoing WUTH soap opera from a well placed source who tells us :

“NHS Improvement were less than chuffed with the process for appointing a new chair of the board.  The recent attempt produced two applications: from Sir Diddy (David Henshaw) and someone else who stood no chance. NHS Improvement demanded a readvertisement of the job.  Applications closed on 19th December.” 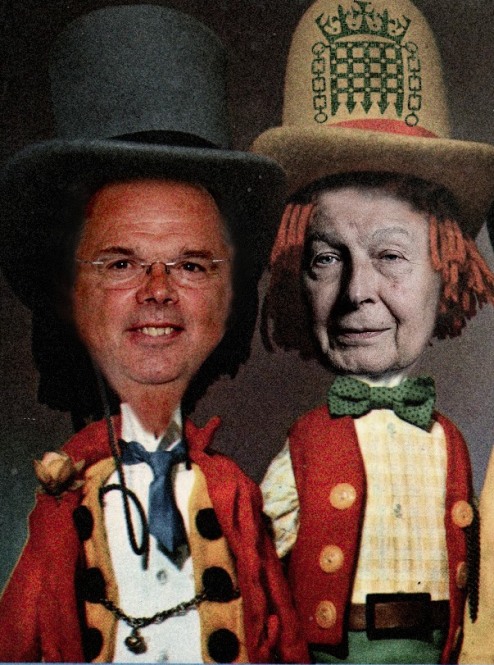 Ms Taylor-Brown has her own consultancy specialising in ‘Executive and Group coaching, Workplace Investigation and Mediation’ called Tamarix People which sounds like a John Wyndham novel or interplanetary baddies in an episode of Dr Who. Read more here: Tamarix People

However it would appear that essentially Taylor-Brown is your classic ex-NHS poacher turned gamekeeper.  We’re not sure her report tells us anything we didn’t already know about the bullying culture (particularly at Arrowe Park Hospital). Read more here : WUTH – Carr Crash OUT, Sir Diddy IN

However our interest in the story was reignited with the inevitable sneering soundbites from Birkenhead MP Frank Field on the appointment by NHS Improvement of new troubleshooting chair Sir ‘Diddy’ David Henshaw.

“At last we have a proper soul-searching report on Arrowe Park which has been many a year coming. I’ve been campaigning for years for root and branch reform at Arrowe Park. Had MPs been consulted on a new interim Chair, we would not have advised in favour of Sir David Henshaw. We badly need an interim Chair who has a track record of opposing and dealing effectively with bullying and poor behaviour.I will be asking the Secretary of State to appoint such a Chair. How will the hospital now deal with the bullies? I have been given a list of names, who maybe account for only some of the bullies, but we need a Chair in whom those members of staff who have been bullied can trust. I call again for one of the companies dealing with this all the time to come in as an independent body to kick-start a recovery in standards”.

Whilst we agree with Frankenfield on one thing ( that’s a first !) – and that is Sir Diddy is definitely not the man for this particular job – we had to laugh at his whining that if he (and presumably other Wirral MPs ) had been ‘consulted’ on the Sir Diddy appointment that it would not have got their seal of approval. Sorry to have to tell you sweetheart this ain’t Wirral Council – not everything gets run past you first!

As for Field’s ‘Bully List’ – perhaps we should start one up with names of bullies ,both officers and councillors , past and present  ,  who have  been responsible for destroying people’s lives and careers at Wirral Council.  Then we can send it to him and wait for him to tell us with an innocent face that he doesn’t interfere in Wirral Council business!

I thought you would be interested in the fact that Michael Carr has resigned this week as Chairman of Wirral University Hospital NHS Foundation Trust.It is likely that NHS Improvement advised him to stand down, following the resignation of David Allison, CEO.The Trust can only benefit from the replacement of both. 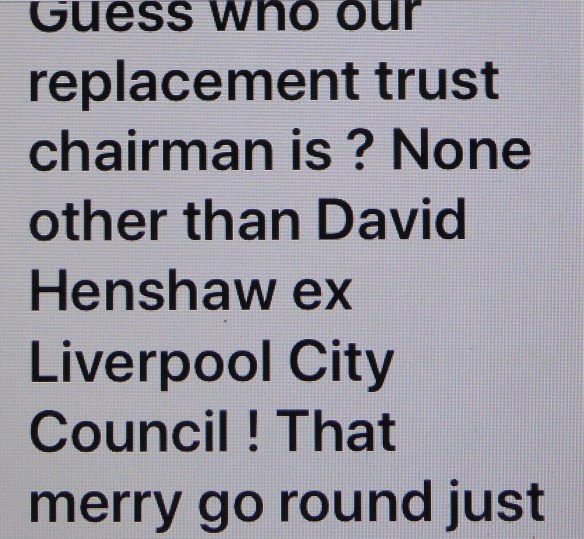 It comes as no surprise that Michael Carr the chair of WUTH hospital has ‘quit’ after a leaked report exposed widespread bullying at APH.

This leaked report highlighted claims of “totally unacceptable” behaviour, evidence of “tribal divisions” and junior staff “set up to fail”. As we’ve previously reported regulator NHS Improvement is investigating “cultural, behavioural and governance issues” at WUTH .Of course this is all very familiar to Wirral Leaks readers as another source tells us :

So what does come as a surprise is that the appalling NHS Improvement – the expression ‘physician heal thyself’ comes to mind – has appointed another notorious bully ‘Sir’ Diddy David Henshaw as the interim chair!

Or perhaps it shouldn’t come as a surprise – have you noticed how the likes of Sir Diddy always find another  highly remunerated ride on the public sector merry go round after they’ve ‘retired’ with a bumper cheque ? Sir Diddy has previously ‘served’ as CEO of Liverpool and Knowsley Councils and left a trail of controversy in his wake.

You can do you own internet searches on this piece of work – but try this for starters : Henshaw’s Evil Cabal

One of the glowing eulogies comes from current Merseyside Police and Crime Commissioner Jane Kennedy : “A man in whom I have no confidence and for whom I have no respect” – and that’s one of the kinder comments.

Inevitably late to the part comes along Frank Field ,wading in where he’s not wanted. Frankenfield wants to “ensure commissioners are sent in both to protect those staff providing an excellent service and with the instructions to root out the thugs and the bullies” : NHS Thugs

The hypocrisy on display here – even for Frankenfield – is absolutely staggering. This is the man who was instrumental in PREVENTING commissioners being sent in to Wirral Council in 2012 when a widespread and corrosive bullying culture was exposed. No consideration of the need to protect council staff or attempts to root out the thugs and bullies then was there ? Could it have been that Frankenfield  knew that some of the most prominent  ‘thugs’ and ‘bullies’ were in the local Labour group -and are still in positions of power?

Is it any wonder the inglorious legacy of this duplicity is that we now discover mental health sick days among Wirral Council staff is at an  eight year high. An ‘Absence Management’ report to be discussed at next weeks Employment and Appointments Committee states:

“A range of initiatives including a focus on mental health support are in place.These activities include targeted approaches for specific areas and universal programmes for all staff with an ethos to support all employees across the organisation.Monitoring and oversight has been further developed to ensure accountability at all organisational levels is in place.”

As you can tell from this anodyne management speak Wirral Council remains in denial it has a bullying culture. Until it does – it will remain a sick organisation.  Wirral University Teaching Hospital bosses and regulators take heed.